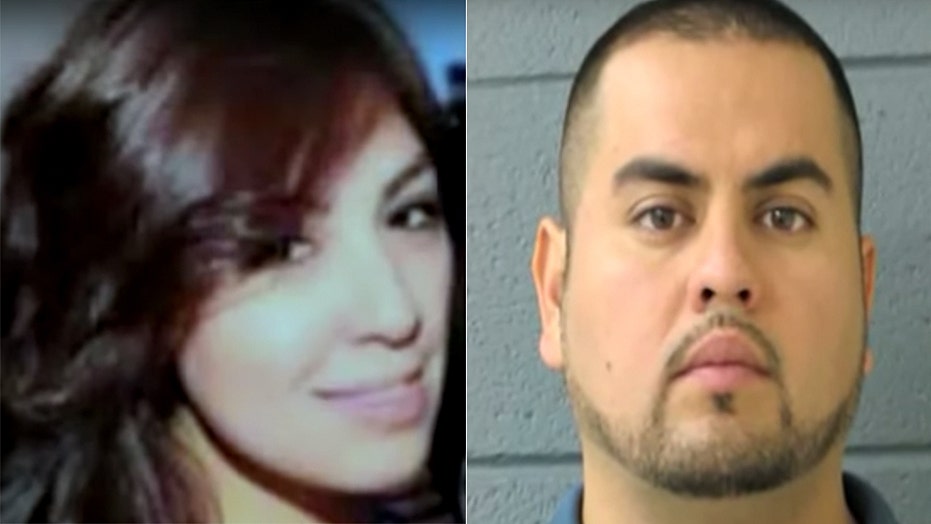 An Illinois man accused of killing his new bride just hours after she married him has been added to the FBI's "Ten Most Wanted" list, as federal law enforcement officials disclosed Wednesday he may have fled the country.

Arnoldo Jimenez, 37, allegedly stabbed 26-year-old Estrella Carrera multiple times before leaving her in a bathtub to die at her Burbank, Illinois home on May 12, 2012, just hours after the two were wed, the FBI said in a news release.

“He has a criminal past and a history of violence,” said Special Agent Steve Barnard of the FBI’s Chicago field office. “We want to bring him to justice.”

The two were married May 11, 2012 in a city hall ceremony and then were joined by family and friends for a reception. What should have been a night of celebration, however, apparently took a turn for the worse on the way home, when officials believe the couple got into an argument in Jimenez’s black Maserati.

Arnoldo Jimenez (right) is accused of stabbing to death his wife, Estrella Carrera, hours after the two were married in May 2012. (FBI)

“We believe she was stabbed in the vehicle and then dragged back into the apartment and left bleeding in the bathtub,” Barnard said.

After Carrera didn't pick up her children -- a 2-year-old son and 8-year-old daughter --  family members asked the police to perform a wellness check on May 13, when her body was discovered in the bathtub.

The 26-year-old was found wearing the same dress she’d worn to the wedding reception.

A murder warrant was issued for Jimenez a few days after the murder, but authorities believe he may have fled the U.S.

An award of up to $100,000 is being offered for information leading to the capture of Arnoldo Jimenez, the FBI announced Wednesday. (FBI)

"He may have fled to Durango, Mexico, specifically in the area of Santiago Papasquiaro," the FBI said. "Jimenez may also frequent Reynosa, Tamaulipas, Mexico."

On Wednesday, authorities announced an award of up to $100,000 is being offered for information leading to Jimenez’s capture.

The FBI added Arnoldo Jimenez to the agency's "Ten Most Wanted' fugitive list. Jimenez is accused of killing his new wife on their wedding night and possibly fleeing the country. (FBI)

The seven-year anniversary of Carrera's killing falls on Mother's Day this year. Family members said during a news conference they still have hope Jimenez will eventually be captured.

“Her children need justice for their mommy," sister Jazmin Carrera told FOX32. "They shouldn’t be at a mass dedicated to her and sending flowers to the cemetery."

Jimenez is now 37 years old and is described as being 6 feet tall, between 200 and 225 pounds, with black hair and brown eyes, according to the FBI. He is still considered to be "armed and dangerous," according to federal officials.

Anyone with information about Jimenez's whereabouts is urged to contact federal officials at 1-800-CALL-FBI or submit tips online.