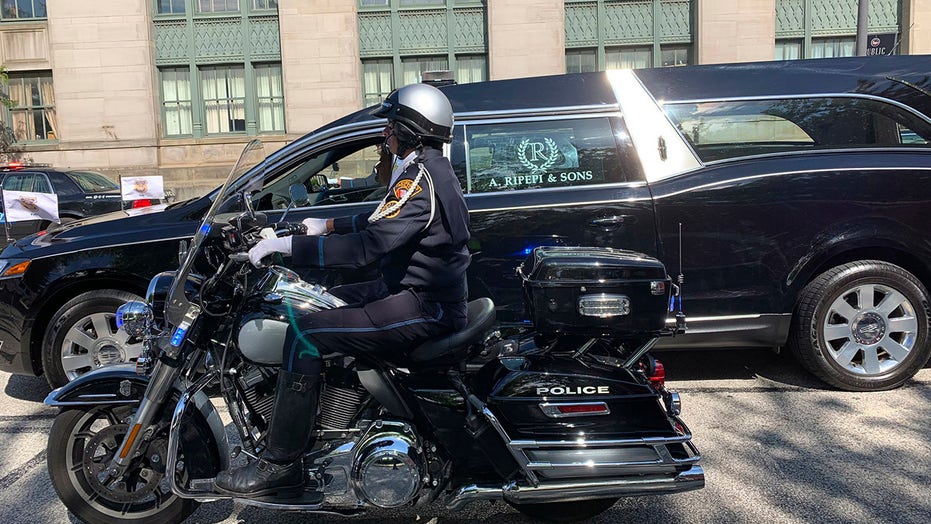 The city of Cleveland joined hundreds of police officers Friday to pay final tribute to fallen detective James Skernivitz at his funeral at the arena that’s home to the NBA Cavaliers.

Skernivitz, 53, and Scott Dingess, 50, a police informant, were sitting in Skernivitz's unmarked police car during a drug operation Sept. 3 when they were shot and killed during a robbery.

Police have charged two teens with aggravated murder in the deaths.

“He was a policeman’s policeman,” Police Chief Calvin Williams told mourners in front of Skernivitz's flag-draped casket. “He lived his life that way.”

In this photo provided by the Cleveland Division of Fire, a hearse bearing the body of Detective James Skernivitz proceeds to the funeral home under police escort Saturday, Sept. 5, 2020. Skernivitz was shot and killed along with a police informant while sitting in an unmarked car during an undercover operation in Cleveland, Ohio, on Thursday, Sept. 3, 2020. (Lt. Mike Norman/Cleveland Division of Fire via AP)

Williams said “Skern” joined the force in 1998 and wrote on his application that he wanted to become a cop because, "I wanted to protect the city I grew up in and make it safe.”

"Jim is a man no one will ever hold a candle to,” his wife, Kristen, wrote in a letter that was read at the funeral.

“Death by violence is a tragic bond that we all share today,” she wrote. “Because of Jim I sure know the right way to live.”

She also said, “Skern loved his family and protected us from realizing the danger he faced every day.”

Barr said Skernivitz had recently become a member the FBI's Violent Crime Task Force in support of Operation Legend, a Justice Department effort to crack down on violent crime in Cleveland and other cities.

Barr noted that these were difficult days for law enforcement around the country, pointing to segments of society that have vilified police.

“I hope those outside this arena pause and reflect on Jim’s sacrifice and what it represents,” he said.

The funeral was moved to Rocket Mortgage FieldHouse in downtown Cleveland from the Cathedral of Saint John the Evangelist so that attendees could observe coronavirus social distancing restrictions.

Skernivitz served as an usher at the arena, his wife said.

He was working undercover the night he was killed but authorities have not said if he was on assignment with Operation Legend or his gang unit.

In addition to his wife, he is also survived by a daughter, two sons and his mother.

The funeral concluded with a bugler playing taps and a solemn End of Watch Call.