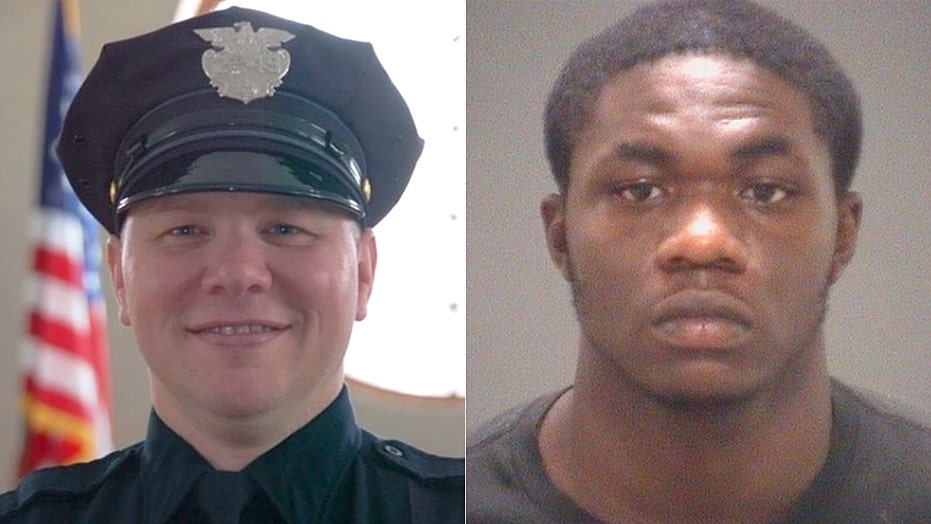 Two teenagers have been charged with fatally shooting a Cleveland police detective and another man during what authorities said was a robbery attempt.

David McDaniel Jr., 18, of Cleveland, was charged Tuesday with two counts of aggravated murder in Cleveland Municipal Court, records show. A 17-year-old male, who was not identified because of his age, faces aggravated murder, aggravated robbery and felonious assault charges in Cuyahoga County Juvenile Court.

Court records don't indicate whether McDaniel has an attorney to speak for him.

McDaniel and the 17-year-old are accused of killing Cleveland police detective James Skernivitz, 53, and Scott Dingess, 50, as they sat in Skernivitz's unmarked police car Thursday night.

David McDaniel Jr., right,  was charged with murder in the shooting that killed detective James Skernivitz. (Cleveland Division of Police)

A police statement of facts filed with the charges against McDaniel say he and two juveniles approached Skernivitz's car, which was parked behind a store, and shot Skernivitz and Dingess during an attempted robbery. McDaniel was arrested Sunday.

It's unclear whether the second juvenile has been charged.

A Cleveland police official knowledgeable about some details of the shooting, but who was not authorized to speak publicly, told The Associated Press that Skernivitz, a 25-year member of the force, was working undercover that night during a drug operation and that Dingess was a police informant.

Skernivitz along with other law enforcement officers were sworn in last Wednesday as members of the FBI's Violent Crime Task Force in support of Operation Legend, a Justice Department effort to crack down on violent crime in Cleveland and other cities.

He was also assigned to the Cleveland police gang unit. Authorities have not said whether Skernivitz was working with the federal task force or the gang unit when he was killed.

Skernivitz's funeral is scheduled for Friday.