Fox News contributor Lara Trump remembers Ivana Trump's legacy as an athlete and a mother and describes her impact on America.

"She would beat any man down a mountain on skis and look like a supermodel doing it," Eric Trump said of the former model and fashion icon. "She was an extraordinary woman."

Ivana Trump, 73, was an exceptional skier who competed with the Czech junior national team, and later worked as a ski instructor and model in Canada.

A housekeeper who arrived for work Thursday found Ivana Trump at the bottom of a staircase at her Upper East Side townhome at 10 East 64th Street and called 911, according to police and a source.

Police responded to the location at about 12:40 p.m. and found her unconscious and unresponsive.

IVANA TRUMP'S LOVE LIFE: A LOOK BACK AT HER ROMANCES OVER THE YEARS

Police believe she may have suffered cardiac arrest and fallen down the stairs, a source said. An official cause of death has yet to be determined.

Eric Trump happened to be working nearby at Trump Tower, the headquarters of the Trump Organization where he is the executive vice president, and arrived at the townhome within minutes, the source added. 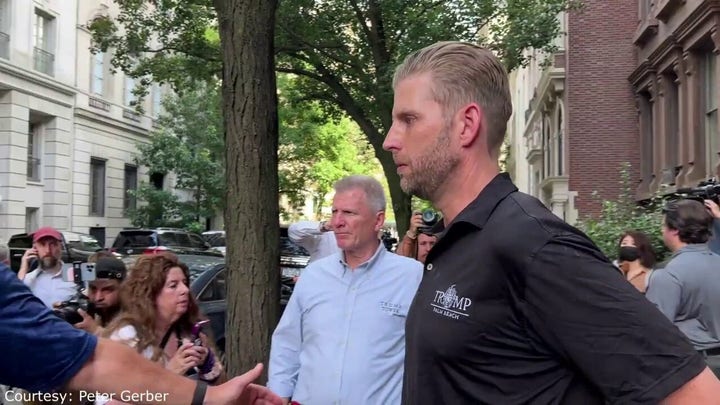 He was spotted leaving the building with his wife, Lara Trump, Thursday afternoon.

The heartbroken son honored his mom in a family statement on Instagram.

"Our mother was an incredible woman — a force in business, a world-class athlete, a radiant beauty, and caring mother and friend," he wrote.

"Ivana Trump was a survivor. She fled from communism and embraced this country. She taught her children about grit and toughness, compassion and determination. She will be dearly missed by her mother, her three children and ten grandchildren," the statement continued.

Donald and Ivana Trump met in New York City and married in 1977, becoming an iconic power couple of the 1980s and a fixture in the city's tabloids.

Ivana and Donald Trump on the beach. (Eric Trump)

The Czech-born beauty worked alongside her husband, helping manage his real estate projects and even designed the interior of his signature building Trump Tower.

But their marriage came to a spectacular end culminating in a public confrontation with Donald Trump's then-mistress Marla Maples on a ski slope in Aspen in 1989.

Their divorce negotiations played out on the front pages of the city's tabloids, with Ivana Trump later quipping, "Don't get mad, get everything," in a cameo as herself in the film "The First Wives Club."

The divorce was finalized in 1992, and the former president went on to marry Maples, with whom he shares Tiffany Trump. He also shares son Barron with his current wife, Melania Trump.

Ivana Trump with her mother and her children, Ivanka, Eric and Donald Jr. (Eric Trump)

Donald Trump, who maintained a close relationship with his first wife, remembered her fondly in a post on Truth Social.

"She was a wonderful, beautiful, and amazing woman, who led a great and inspirational life," he wrote. "Her pride and joy were her three children, Donald Jr., Ivanka, and Eric. She was so proud of them, as we were all so proud of her. Rest In Peace, Ivana!"

Emmett Jones contributed to this report.