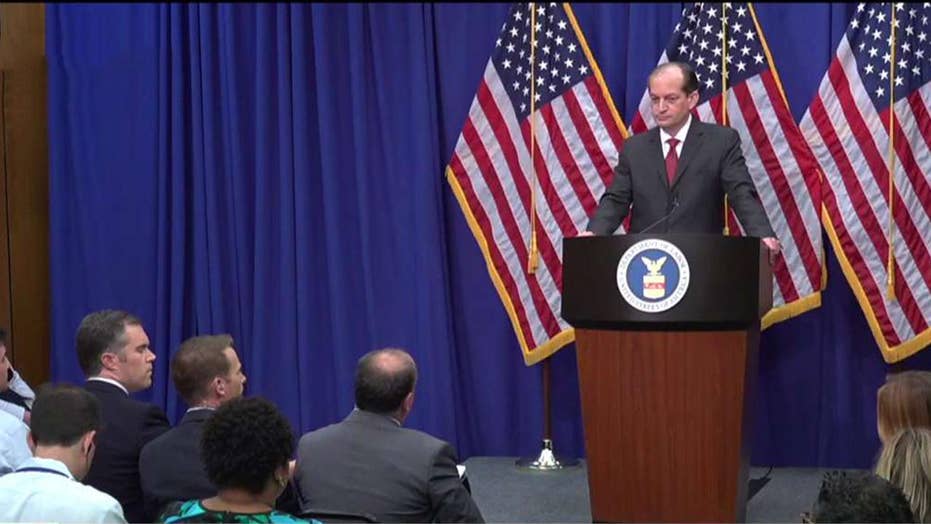 Manhattan District Attorney Cyrus Vance Jr. is among a growing group of federal prosecutors nationwide who've come under fresh scrutiny in the wake of charges of conspiracy and sex trafficking against Jeffrey Epstein.

Epstein was required to register as a sex offender in Miami in 2008 as part of a nonprosecution plea deal that resulted in an 18-month sentence. (He served just 13 months for solicitation of prostitution involving one underage victim.)

Just three years after that plea, a sex crimes prosecutor, Assistant Manhattan DA Jennifer Gaffney, pleaded with a federal judge to allow Epstein to downgrade his registered-sex-offender status from Level 3 to the lowest possible classification, Level 1, despite an assessment by a Florida board.

Despite the assessment that Epstein was a dangerous sex offender likely to prey on young women again, Vance's office argued on his behalf, much to the shock of Justice Ruth Pickholz, who ruled against this assertion at the time.

This March 28, 2017 image provided by the New York State Sex Offender Registry shows Jeffrey Epstein. The wealthy financier pleaded not guilty in federal court in New York on Monday, July 8, 2019, to sex trafficking charges following his arrest over the weekend. Epstein will have to remain behind bars until his bail hearing on July 15. (New York State Sex Offender Registry via AP)

“I have to tell you, I’m a little overwhelmed because I have never seen a prosecutor’s office do anything like this,” the judge told Gaffney, according to reports by The New York Times.

Vance's office later backpedaled on its stance in favor of Epstein and filed a change-of-heart brief agreeing that he should be registered as a Level 3 sex offender, citing "a combination of a mistaken interpretation of the governing legal standards and certain secondhand information about the Florida case" led the office to determine inaccurately that a Level 1 registration was sufficient.

“As reported in 2015, our Assistant District Attorney appeared at Jeffrey Epstein’s SORA [Sex Offender Registration Act] hearing and mistakenly believed, based on an incorrect interpretation of the statute, that SORA effectively prohibited the assessment of points for unindicted crimes," Vance's spokesman, Danny Frost, told Fox News on Wednesday. "The District Attorney’s office promptly filed briefs with the appellate court which acknowledged the error by the Assistant District Attorney and strenuously argued that Epstein should receive the highest sex offender status. D.A. Vance was not made aware that the Manhattan D.A.’s Office even had this SORA matter, or any matter involving Jeffrey Epstein, until well after the hearing occurred and only when the office corrected its legal error on appeal.”

A Democratic contender who plans to challenge Vance's post in 2021 slammed the district attorney, demanding accountability for the earlier stance on Epstein.

“Why did the DA’s office ignore a confidential state assessment that deemed Epstein to be highly dangerous? Which lawyers for Mr. Epstein approached the office to have his offender status reduced?” Alvin Bragg asked on Tuesday.

This is not the first time that Vance's office has raised concern over its treatment of affluent defendants.

In 2012, Vance did not pursue charges against President Trump's children, Ivanka and Donald Jr. after they were accused of misleading investors to buy into a failing condominium project in New York City despite numerous emails and other correspondence that alluded to the Trumps intent. Just five months later, Trump's attorney Marc Kasowitz made a $32,000 donation to Vance's campaign further raising speculation that Vance was doling out favors for reciprocity. The donation was returned five years later, in 2017, after Vance was asked about it by a reporter.

In 2015, Vance refused to prosecute Hollywood producer Harvey Weinstein for allegedly groping an Italian model, later opting to prosecute him for sexual misconduct against two other victims.

"Under D.A. Vance, our office has routinely and aggressively prosecuted scores of powerful men without fear or favor for sex crimes, white-collar crimes, and other serious criminal misconduct," Frost said.

Epstein, 66, pleaded not guilty Monday to additional sex trafficking and conspiracy charges brought against him this week after he was arrested at Teterboro Airport in New Jersey on Saturday.

The financier, who owns homes in both Palm Beach, Fla., and Manhattan, allegedly created and maintained a "vast network" and operation from 2002 "up to and including" at least 2005 that enabled him to "sexually exploit and abuse dozens of underage girls," in addition to paying victims to recruit other female minors.

Labor Secretary Alexander Acosta, who was a U.S. attorney for Florida in 2008, helped Epstein secure what some critics have dubbed a "sweetheart" plea deal in relation to similar charges he faced in Florida. The deal was criticized as lenient because Epstein could have faced a life sentence. Acosta negotiated a deal that resulted in two state solicitation charges, but no federal charges.

Acosta pushed back on calls for him to step down from his current post at a press conference on Wednesday.

“With the evidence available more than a decade ago, federal prosecutors insisted that Epstein go to jail, register as a sex offender and put the world on notice that he was a sexual predator,” Acosta said. “Now that new evidence and additional testimony is available, the [New York] prosecution offers an important opportunity to more fully bring him to justice.”