A collection of groups led by Black Lives Matter and Shutdown DC reportedly has been holding training sessions for demonstrators to protest on Election Day -- and apparently, they’re planning a large-scale event across the street from the White House expected to draw thousands.

Several leaked documents and Zoom call recordings described a loose but coordinated network of activists seeking to mobilize around the country, especially if Democratic presidential nominee Joe Biden loses or if President Trump contests the election results. The materials purportedly showed plans to shut down federal buildings, including the White House, and to meet members of Congress at public transportation portals when they’re scheduled to reconvene in Washington after the election.

The apparent goal: to continue the civil unrest from Election Day until at least later this week -- and potentially until the presidential inauguration in January.

Fox News could not independently confirm the legitimacy of the recordings and documents with local and federal law enforcement. DC Metro Police Department did not immediately return a Fox News request for comment.

Responding to Fox News, the FBI said its standard practice is to neither confirm nor deny an investigation. The agency did say it has been working well in advance of Nov. 3 with federal, state and local partners to “gather and analyze intelligence to determine whether individuals might be motivated to take violent action for any reason.”

FBI headquarters is focusing on providing a “centralized location for assessing election-related threats, tracking status reports and significant complaints from FBI field offices, monitoring for indicators of a coordinated nationwide effort to disrupt the election process, providing guidance to FBI field offices, and coordinating an FBI response to any election-related incident.”

FBI field offices are standing up election command posts to coordinate with headquarters and local and state partners to streamline communication and ensure the safety of elections and the public, the agency said in a statement.

According to the Shutdown DC website, thousands of people are planning to “start this next phase of the election cycle in the streets” by gathering at Black Lives Matter Plaza by 4 p.m. Tuesday. Large screens will be set up to stream election results as crowds are entertained by GoGo bands, salsa dancers, artists and cultural workers,  according to the site.

“Votes will still be coming in, so this will (probably) not be the time we need to create disruption to stop a coup - yet. But we’ll be in a good place to respond to whatever might happen,” the website claimed. “This has been a really long and dark era so we’re going to be together to process our feelings of hope, anger, fear, and exhaustion as a community.” 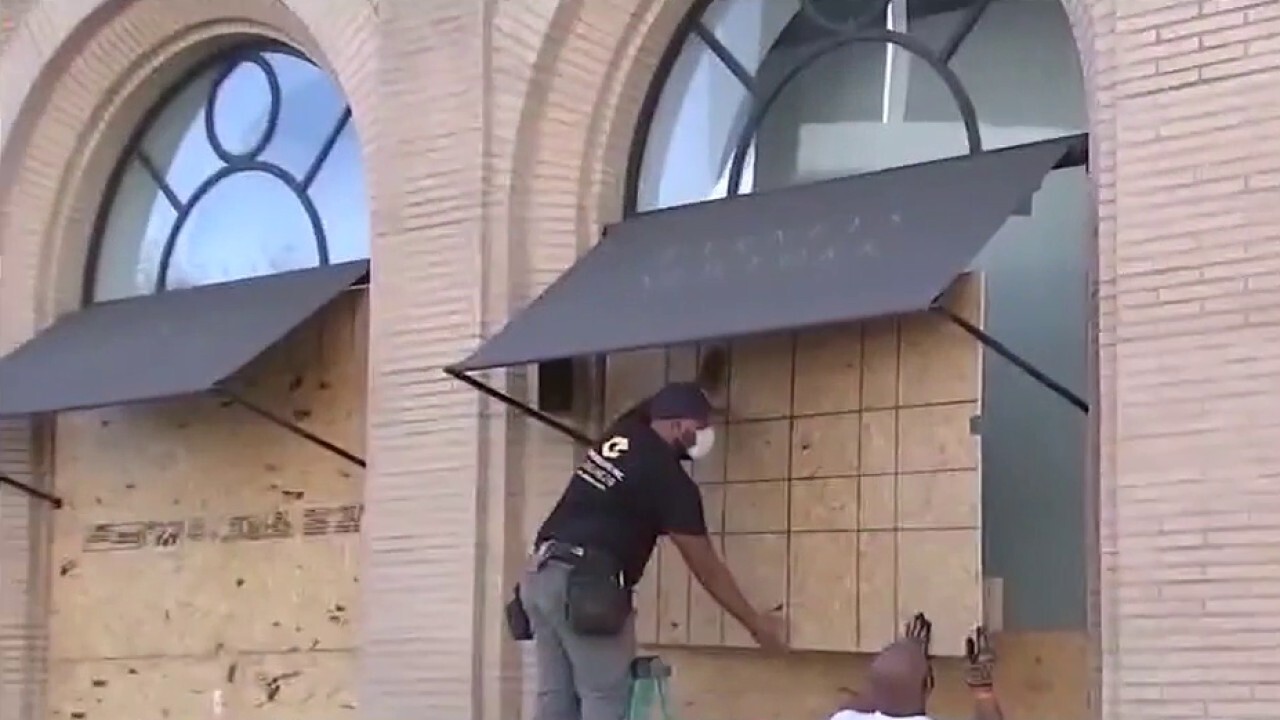 Cities across the nation preparing for election unrest

DC and cities across the country brace for unrest over election results; Leland Vittert reports.

A recording purportedly of one training session hosted over Zoom by the “Sunrise Movement” featured Lisa Fithian, who has been described by Mother Jones “as the nation's best-known protest consultant.”

In the video, Fithian showed a target map displaying all the police stations, key government buildings, media outlets and buildings occupied by “Trump boosters” in the DC area. She discussed “what would it take to surround the White House.”

“We’re facing an administration and a potential coup and a potential insurrection,” Fithian said. “Is there going to be a war? Are people gonna get killed? Like is that on anybody else’s mind? I’m guessing it is. We’re going to see potential fighting all over the country or in some hotspots, and we’ve already seen that, so how do we work together across the country to help support each other no matter where we are and to maximize our impact by doing similar things on similar days at similar times?”

'NO CLIMB' FENCE TO BE INSTALLED AROUND WHITE HOUSE, SOURCE SAYS

Fithian said demonstrators willing to break windows on government buildings should go a step farther and get inside. She told those on the call, “We have to be willing to put our bodies on the line and take on some discomfort and sacrifice risk in order to change things.”

“We are going to be in a crisis but we want to make sure it’s one that we are creating. We want them to be responding to us and us not responding to them. In a situation of a coup or an insurrection or an uprising, whoever’s got the guns, often can win. We should be clear. Trump’s gotta go,” she said, according to the recording of the call posted to the YouTube account SunriseExposed.

The video has since been removed from YouTube for violating community guidelines.

Various activist groups allegedly coordinated via Zoom calls and at some in-person events for months ahead of Election Day for training sessions targeting anyone from the young street protesters to federal employees “seeking methods of professional civil disobedience.”

“The police are readying for battle. We should be very clear about that,” April Goggans, a core organizer with the local Black Lives Matter affiliate, said during an Oct. 26 online training session, The Associated Press reported.

Neither Fithian nor Goggans responded to Fox News' requests for comment.

Another leaked Zoom call viewed by Fox News purportedly showed federal workers, including attorneys and members of the intelligence community, discussing ways to go past street protests and “slow the gears downs” through their bureaucracy should the “election go sideways.” In part, they planned to stack vacation hours and sick days in order to slow down bureaucratic processes.

The video showing clips from that Zoom call remained active on YouTube as of Tuesday morning.

The documents and video recordings were first obtained by Millie Weaver, founder of the investigative journalist site Millennial Millie.

In an interview with Fox News on Monday, Weaver said the edited clips posted to YouTube were taken from over two-hour long Zoom recordings exposing plots "to exhaust emergency and law enforcement resources." She said the different names listed as participants on the Zoom calls include federal employees with high-level administrative powers and even former State Department employees with experience related to government insurrections abroad.

Some organizations leading these training sessions were founded decades ago, while others were newly formed over the summer in response to George Floyd’s death in Minneapolis at the end of May, according to the AP.

Ahead of the presidential election, workers with Baguer Construction LLC board up a Walgreens on U Street NW, Friday, Oct. 30, 2020, in Washington. The site manager said they had been hired to put protective coverings on several Walgreens throughout the city. (AP Photo/Jacquelyn Martin)

Hope Neyer, an organizer with Shutdown DC, told the AP her group was rehearsing “election meltdown simulations” that include indefinitely occupying certain public spaces and rushing to intervene in attempts to intimidate voters at polling places or seize ballots.

A recent training session for demonstrators led by BLM emphasized personal safety: Enter a protest with a trusted crew of friends; always look for a safe exit route; be aware of whether you’re standing on public, private or federal land; and know your rights in each case; drink plenty of water. One slide advised participants that if a protester is physically attacked, other demonstrators should “totally surround person being attacked and absorb them back into the crowd.”

Meanwhile, low-altitude helicopter flights have been conducted by the U.S. Department of Energy’s National Nuclear Security Administration over downtown Washington, D.C., in preparation for the presidential inauguration scheduled to take place on Jan. 20, 2021, to protect public safety.

Businesses in the downtown DC area have also already boarded up their first- and second-story windows in anticipation of repeated rioting and looting seen over the summer.  Activists are fearing that Facebook and Twitter might shut down and are embracing encrypted messaging apps such as Signal and Telegram to communicate during demonstrations.

Nadine Bloch, an activist who founded the organization Beautiful Trouble, told the AP that she helped set up a “resistance hotline” for groups seeking support and believes local activists stand ready to “completely interrupt ordinary life, if that's what we need to do.”

At the moment, Bloch, whose experience dates back to captaining a ship for Greenpeace in the 1990s seeking to disrupt French nuclear tests, said her training priorities are “street smarts and street safety.” She said marches are “easily ignored,” while long-term occupations can be a tremendous drain on resources. She counsels groups not to waste time and energy “arguing about different tactics.”

The street event in front of the White House is planned as District of Columbia officials reportedly told Trump that a party planned for election night at his luxury Trump International Hotel in Washington could be in violation of rules limiting mass gatherings during the coronavirus pandemic. Trump said he might stay at the White House or choose another venue amid the city’s shutdown.

D.C. Mayor Muriel Bowser has been a vocal critic of Trump's and in June renamed a portion of the street in front of the White House “Black Lives Matter Plaza” and had the slogan spray-painted on the asphalt amid largescale demonstrations following the death of Floyd in police custody in Minneapolis.

The renaming came after Trump ordered federal law enforcement and the National Guard into D.C. against Bowser’s wishes amid widespread looting and property damage. The president also received criticism after federal police used tear gas to forcefully clear peaceful protesters in order to allow Trump to walk from the White House to the historic St. John’s Church to pose with a Bible.