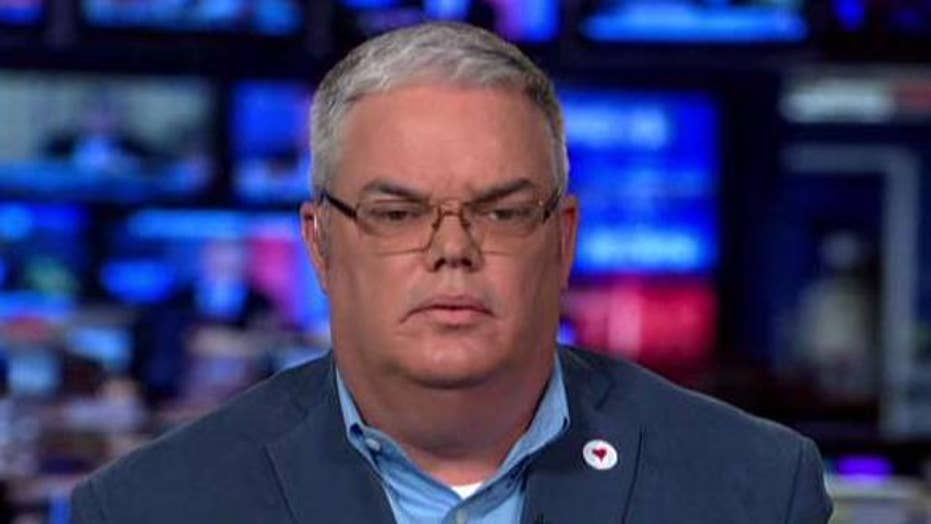 Former officer speaks out after daughter dies of overdose

Father shares a message about the opioid epidemic on 'The Story.'

Kevin Simmers locked up drug abusers in western Maryland for years as a narcotics officer for the Hagerstown Police Department. Then, one day, the crisis found a way into his own home.

“I felt like handcuffs and incarceration were the answer to this epidemic,” Simmers said.

Now, he runs a drug treatment program to help addicts. He’s hoping that although he wasn’t able to save his daughter, he could save the lives of others.

“Brooke’s House,” which opens its doors soon Hagerstown, Md., is named after his late daughter, who after a years-long battle with drug addiction, ended up dying from a drug overdose. The program he opened with his wife offers counseling, medically assisted treatment and career training.

“I’m hoping they leave here with a purpose, live a sober life, and are ready to conquer the world,” Simmers said.

He said his views on drugs and addiction changed in 2013, when his then-18-year-old daughter, Brooke, admitted she was hooked on Percocet, an opioid pain medication.

Simmers, now a retired officer, said he watched his own daughter battle addiction for years. Although he tried to help her, he could not.

Simmers reached out to treatment facilities to try to get her off the street, but was frustrated he couldn’t choose the type of treatment. The insurance companies only authorized outpatient treatment.

TIMOTHY MCMAHAN KING: I'VE STRUGGLES WITH AN OPIOID ADDICTION – TO FIND A SOLUTION, WE MUST BREAK THE SILENCE

This ultimately failed, as she quit after a few weeks. Brooke told her father she was now shooting heroin, and funding her habit through shoplifting, embezzlement, and selling her body.

The family then tried an inpatient facility option, but bed space wasn’t available for over a week. In that time, Brooke ended up relapsing. She was in and out of treatment facilities, seeking help but then relapsing again. She ended up in the hospital, she ended up in jail. Nothing helped.

She ended up dying from a heroin overdose.

Nationwide, more than 70,200 Americans died from an overdose in 2017, according to the latest data from the National Institute on Drug Abuse.

A month after Brooke’s funeral, Simmers and his wife realized they needed to fulfill their promise to Brooke and build the sober living home in her honor.

Anytime Simmers and his wife went on vacation, they would visit drug treatment facilities to collect research. They wanted to avoid copying other facility’s bad attributes, such as overcrowding. He didn’t want a place that was co-ed.

After four years, they built Brooke’s House. The women enrolled have three career path options to be trained in -- cosmetology, pet grooming and chocolate making. The goal is to give these girls applicable job skills they can utilize after graduating from the program, an opportunity Brooke did not get.

Everyone in “Brooke’s House,” from management to enrollees, are required to participate in the chocolate-making process. Proceeds from chocolate sales will support the program.

When asked the difference between this house and other facilities Brooke was enrolled in, Simmers said: “This house has been built with love.”

Everything from the driveway, to furniture and plumbing has been donated from the community.

Simmers says he doesn’t believe in the saying, “You won’t be able to reach everybody.” He feels “Brooke’s House” will be able to help every girl that enters.