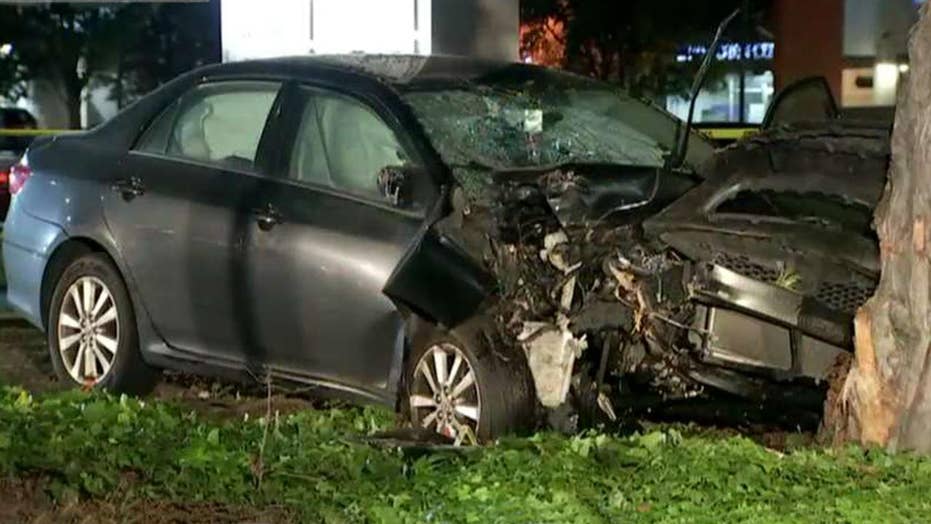 At least 8 hurt after driver intentionally plows into group of people in California: police

A 13-year-old girl is the youngest victim after police say a driver intentionally sped through an intersection and plowed into a tree. The suspect is in custody in Sunnyvale, California.

The unidentified driver who plowed into eight people in California on Tuesday may have rammed the group "intentionally," officials said, noting the driver made no attempt to break and allegedly steered toward the pedestrians -- including a 13-year-old girl.

Authorities took the man behind the wheel of the black 2010 Toyota Corolla into custody but were still working Wednesday to establish a possible motive. After striking the group, the car continued on for a few more yards before slamming into a tree near a shopping center, heavily damaging the sedan's front windshield and hood.

Officials didn't immediately know if drugs or alcohol may have played a role and the conditions of the injured have yet to be released. The FBI said Wednesday morning it is assisting local officials in the investigation. FBI Spokesman Prentice Danner told KTVU the Sunnyvale Police Department remains the lead agency in the investigation, but "should it be determined that a federal crime was committed, we will become more involved."

The Sunnyvale Department of Public Safety said the incident happened around 6:40 p.m. as the driver was heading west on El Camino Real towards the city of Mountain View.

"We don't know the motive behind this based upon witness statements the driver might have intentionally ran into the group of people into the sidewalk, there was no attempt to brake or steer away," Police Captain Jim Choi told KTVU.

Choi told KGO-TV there was no sign of "any kind of evidence of braking," at the scene.

The crash happened at the intersection of El Camino Real and Sunnyvale Saratoga Road in Sunnyvale, California.  (Sunnyvale Department of Public Safety)

"Looks like it might have been an intentional act," Choi said. "All of that is under investigation at this time."

The victims-- which included a 13-year-old girl -- were rushed to the hospital but neither the injuries nor their severity was made public.

The crash prompted a massive law enforcement response that shut down about a half block of El Camino Real. The victim's belongings and bicycles could be seen scattered around the area of the crash, NBC Bay Area reported.

The damaged car can be seen after ramming into 8 people on the sidewalk in Sunnyvale, California on Tuesday. (KTVU)

Nearby residents told ABC7 the intersection, which is surrounded by homes and businesses, is typically busy.

"People are just walking to get to these restaurants and food places and grocery stores, rather than getting in their car and driving there," Shanelle Fioretti told KGO-TV.

Police are investigating if the man was actually stopped at the light, or if he ran a red light. He could face charges for assault with a deadly weapon if authorities conclude the strike was deliberate.

Despite the damage to the Toyota, officials said the motorist did not have any major injuries, according to KTVU.

Officials said on Twitter that Sunnyvale Avenue, between El Camino Real and Old San Francisco, will be closed until 8 a.m. local time as the investigation into the incident continues. Two lanes of westbound El Camino Real will be open until investigators cleared the scene.