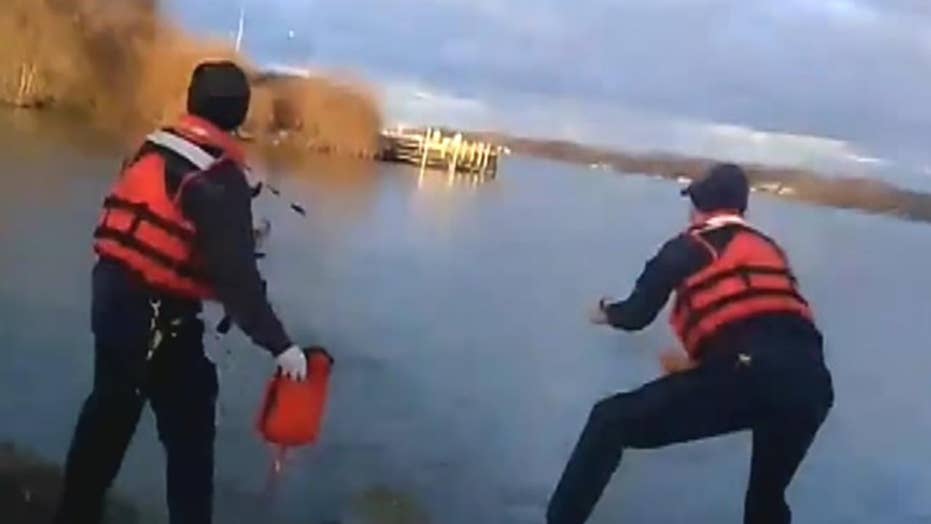 A quick-thinking police officer in Michigan is being hailed a hero after saving a woman from a vehicle sinking in a river on Monday after grabbing a kayak from a nearby home.

The Trenton Police Department told FOX2 that the incident took place around 4 p.m. when authorities received a call that there was a car in the Detroit River about 17 miles south of downtown Detroit.

In body camera footage released by the department, officers can be seen searching and then frantically moving when realizing there was someone inside the car.

"There's someone in the driver's seat... They're not able to get out there," an officer can be heard saying in the video.

The car was spotted in the Detroit River in Trenton, Mich., located about 17 miles south of downtown Detroit. (Trenton Police Department)

"She's awake, she can't get out," another officer can be heard saying.

TEXAS DEPUTIES RESCUE MAN ON FIRE FROM CRASH, PUT HIM IN NEARBY PUDDLE TO EXTINGUISH FLAMES

As the car drifted in the current and began to sink, Sgt. Steve Lyons "commandeered" a kayak from a nearby home and paddled out to the vehicle.

Lyons, an eight-year veteran of the department, then used the paddle to smash the window and pulled the woman onto the kayak. He then can be seen bringing her back to the shore without a lifejacket in the frigid conditions.

UNSUNG HEROES OF 2018: FIRST RESPONDERS, KIDS AND A NASCAR DRIVER WHO WENT ABOVE AND BEYOND

The 53-year-old woman was taken to a local hospital, but officials said she did not sustain serious injuries. Police are still investigating how the vehicle ended up in the river.