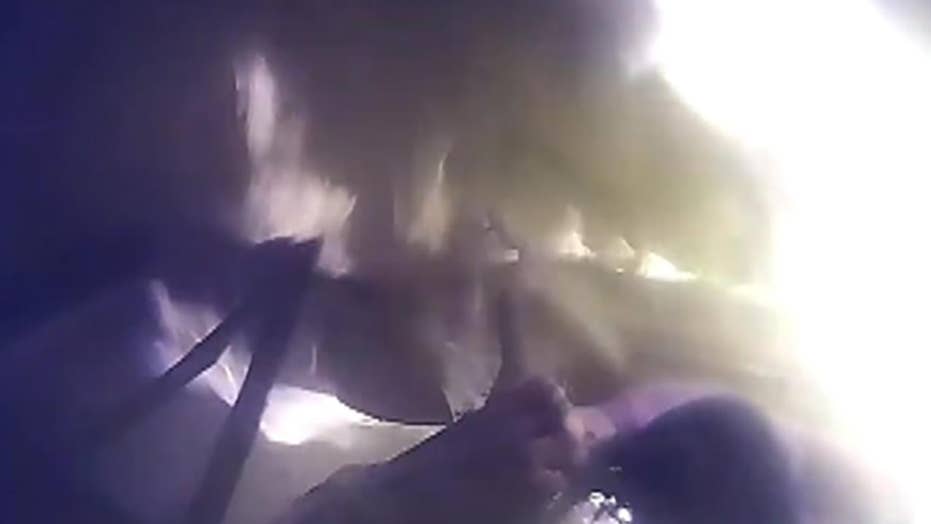 Police save man from car engulfed in flames

Two deputies in Texas are being praised for their heroic actions after pulling a man from a burning car and then laying him in a nearby puddle to extinguish the flames.

Deputies Braedon Boznango and Carlton Carrington arrived to reports of a major vehicle crash to find one of the vehicles fully engulfed in flames with an unconscious man in the front seat.

"My first thought was, 'we can't let this guy burn to death right in front of us,'" Carrington told ABC13. '"I just remember watching the flames run up the man's face. There was, I guess, a draft."

In bodycam footage released by the department, the man can be seen in the front seat with his legs and abdomen on fire.

The man was pulled from the burning vehicle on Dec. 13. (Chambers County Sheriff's Office)

The officers were able to drag the man from the burning car by pulling him through the door window and then placing him in a nearby puddle.

"Had these deputies not acted quickly, decisively and without total disregard for their own safety, the seriously injured man would have perished inside the vehicle," the sheriff's office said.

The man was taken to the hospital, where he was listed in critical condition.

The deputies were not injured during the rescue, but the heat from the blaze was so intense that some of the equipment on their uniforms was melted.

"It's what we do," Boznango told ABC13. "It's our job. From the smallest thing to more severe cases like this."