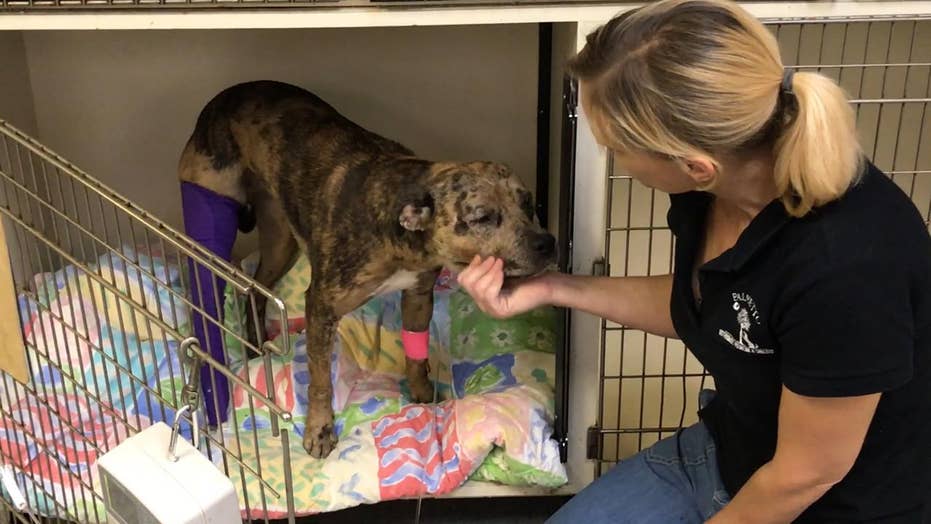 A South Carolina couple says their family dog, Diamond returned home after she was reported missing with wounds

A 1-year-old pit bull mix was set to have surgery Tuesday after her owners say she disappeared only to return a day later with signs of torture.

“Oh I cried. I dropped to the floor and I freaked out,” Bruce said.

Bruce said she and her fiancé rushed the dog to Palmetto Veterinary Medicine and Surgery, where she was kept over night.

“They called me later on that day and told me that her hip was shattered and her femur bone was broke," Bruce said.

Hamilton said he was upset when he received the news that ‘Diamond’ would need her right hind leg amputated.

“It really hurt because I raised her from when she was really little,” Hamilton said. “[She’s] my little girl too, you know.”

Veterinary Technician Melissa McCloud said “Diamond” will undergo an hour-long surgery, but she is expected to make a full recovery.

“She’s young enough,” McCloud said. “ She will definitely do well.”

Bruce is hoping for a successful surgery -- and a little more.

“I’m hoping for justice because animal cruelty is wrong,” she said.

Adding to the suspicions of Bruce and Hamilton, the couple's neighbor’s dog disappeared and came back with similar marks. The neighbor’s dog had to be put down due to its injuries, Bruce said.

A spokesman with the York County Sheriff’s Office said they were investigating the incident.