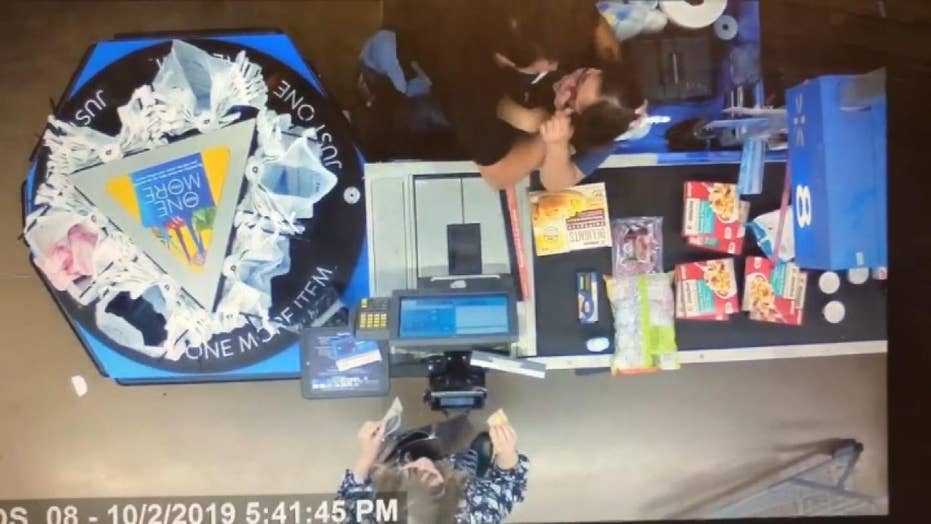 Raw video: The man faces multiples charges after attacking the cashier without any provocation.

A Delaware man who police say was heavily intoxicated was arrested after security cameras caught him violently choking a Walmart cashier in Florida while waiting in the checkout line last week.

Peter McGuaghran, 32, stepped around the bagging area and pushed the female cashier against the counter before he began to “choke her without provocation,” the Stuart Police Department said.

TEXAS MAN CLAIMS 'VOODOO' MADE HIM STEAL $400 IN STUFF FROM WALMART, POLICE SAY

Overhead security footage showed McGuaghran grabbing the cashier from behind and taking hold of her head between his hands just after 5:30 p.m. on Oct. 2.

McGuaghran’s girlfriend, 38-year-old Jennifer Budd, of Stuart, and a bystander helped pull the suspect off the woman, who was subsequently treated at a hospital for minor injuries, the TC Palm reported.

The cashier, identified as Libia Evans by WPEC-TV, recalled how she feared for her life in an interview with the West Palm Beach station.

“That moment, I believe I remember, ‘Oh God help me, God help me,’ because only God can help me,” the woman said.

Investigators said they smelled a “heavy odor” of alcohol coming from McGuaghran, the Palm reported.