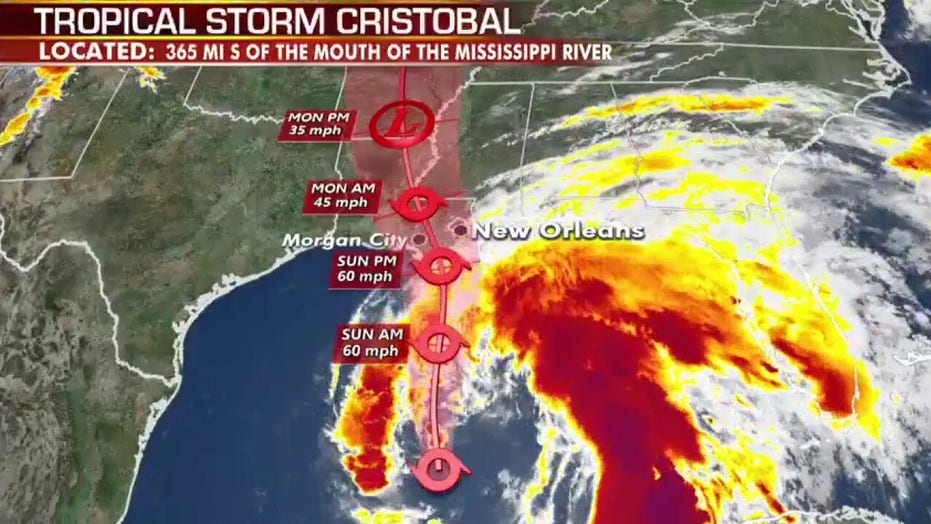 Cristobal strengthened to a 50mph tropical storm Saturday morning and is moving faster than anticipated at 12mph, with expected landfall Sunday afternoon in Louisiana.

Several environmental factors, including dry air and shear, will keep Cristobal from strengthening too much and the NHC still brings Cristobal to a moderate 60mph tropical storm at landfall.

Although it isn't impossible for Cristobal to become a hurricane, at this point, it is unlikely. Nonetheless, tropical storm warnings and storm surge warnings are now in effect.

As far as tropical storms go, the U.S. impact from Cristobal shouldn't be that significant. There will be 2-4 feet of storm surge across southeastern Louisiana and coastal Mississippi.

Areas east of there through the northern half of the east coast of Florida will see 1-2 feet of surge.

Because the storm is quite large in size, it will bring widespread 3-6 inches of rain with some spots up to 10 inches from north Florida through coastal and just inland Alabama and Mississippi. This will cause some very localized flooding.

That said, most of that area is dealing with drought, so while too much too fast, it'll be some welcome rain to agricultural areas.

Brief, isolated tornadoes will also form within rain bands moving onshore on the east side of Cristobal.  Heavy rain will spread northward deeper into the Mississippi River Valley Sunday night into Monday.