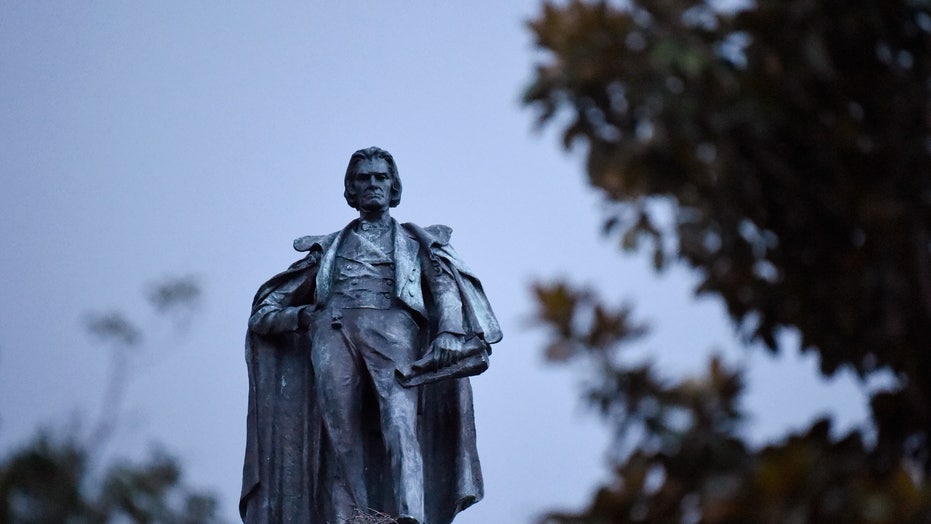 Crews brought out chainsaws and started the process of taking down the massive statue of former vice president John C. Calhoun in historic Charleston, S.C., on Wednesday.

Several hundred people came out to see the 115-foot monument's removal, which was dedicated to the slavery advocate and former senator.

“We place white supremacy and white supremacist thought back where it belongs - on the ash heap of history," said Charleston Councilman Karl L. Brady Jr.

SOUTH CAROLINA PROTEST CANCELED AFTER DEMONSTRATORS COME DOWN WITH CORONAVIRUS

Removal crews were seen using bucket trucks and massive cranes to reach the height of the statue. They also appeared to remove plaques that decorated the four sides of the monument's pedestal.

"Calhoun Street between Meeting Street and King Street is closed for the removal of the John C. Calhoun statue," the Charleston Police Department tweeted just after 11:30 p.m. on Tuesday night. "It will be closed for several hours."

City Council members, including Brady, had approved a resolution to authorize the statue's removal in a 13-0 vote during a late-day meeting on Tuesday. It came after Charleston Mayor, John Tecklenburg, announced he would be sending the resolution to the City Council.

“We have a sense of unity moving forward for racial conciliation and for unity in this city,” Tecklenburg said following the vote to remove the statue, according to Charleston's WCSC-TV. “God bless you all.”

Tecklenburg reportedly announced his plans to remove the statue last Wednesday. It resulted in dozens of protesters linking arms around the monument while shouting, “Take it down!” He added that Calhoun's statue isn’t protected under South Carolina’s Heritage Act for various reasons, which shields historical monuments and names of buildings.

Others feel the divisive statue is part of history and should stay up, according to the station.

In the 1830s, Calhoun had reportedly called slavery a "positive good" and argued that slaves in the South were better than free Blacks in the North.

“[The monument] is seen by many people as something other than a memorial to the accomplishments of a South Carolina native, but rather a symbol glorifying slavery and as such, a painful reminder of the history of slavery in Charleston," the city said in the resolution.

The monument stands at 115 feet tall and was erected in 1896, according to the Charleston Museum.

A 100-foot monument to former U.S. vice president and slavery advocate John C. Calhoun towers over a downtown square Tuesday, June 23, 2020, in Charleston, S.C. Officials in Charleston voted unanimously Tuesday to remove the statue from a downtown square, the latest in a wave of actions arising from protests against racism and police brutality against African Americans. (AP Photo/Meg Kinnard)

Calhoun, the seventh vice president, also served as the U.S. secretary of state and secretary of war, the station reported. He died in 1850, 11 years before the start of the Civil War.

On Tuesday night, a granite pillar that held the statue of a Confederate soldier at the North Carolina Statehouse grounds for 125 years, came down after three days of failed attempts.