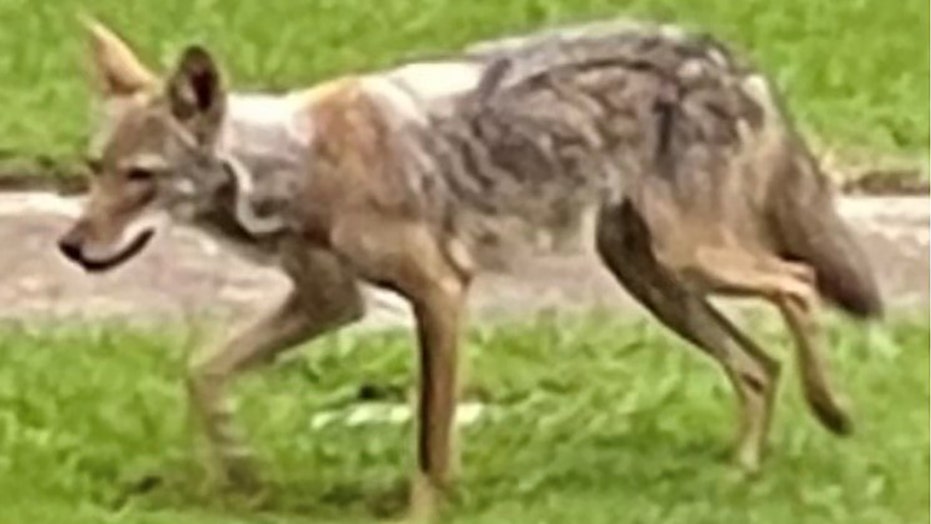 A coyote in Texas is being hunted after the animal critically injured a two-year-old child who was sitting on their porch Tuesday morning, authorities said.

The attack happened just before 8:30 a.m. in the 9200 block of Royalpine Drive in Dallas, Dallas police told Fox News Digital via email. The child was sitting on the front porch of the home when the coyote attacked. It was unclear whether any adults were present.

Officers arrived and located the coyote at a nearby park, police said. Officers fired shots at the coyote, but the animal fled into the woods. It was unclear if the coyote was struck.

The coyote pictured above attacked a 2-year-old child in Dallas on Tuesday morning and is considered "extremely dangerous," police said. (Dallas Police Department)

The child was hospitalized in critical condition. No details on the extent of the child’s injuries were immediately available.

Dallas police shared a photo of the coyote responsible for the attack and said the animal is considered "extremely dangerous."

"When a coyote attacks, it’s usually an unwell coyote, a coyote that’s not healthy," Sam Kieschnick with Texas Parks and Wildlife told FOX4 Dallas-Fort Worth. "That’s a coyote that should be removed from the population."

Brett Johnson, an urban biologist with Dallas Parks and Recreation, told the station that the coyote appears to have a case of mange and looks emaciated.

As police and game wardens continue to search for the coyote, authorities asked the public to be on alert and call 911 if they see the animal.