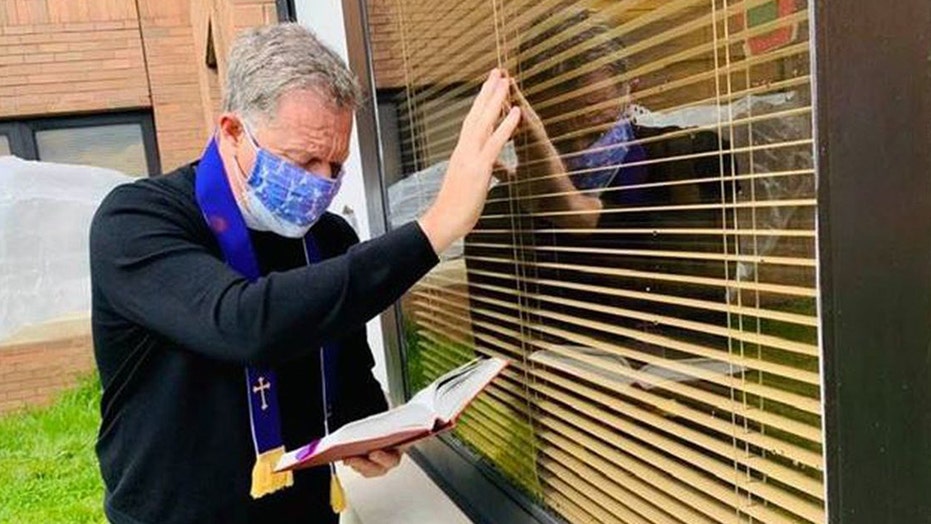 Father Scott Holmer on how he came up with the idea and the community's response.

A New Jersey priest gave last rites to a parishioner who had coronavirus, not over the phone or in person -- but through a window.

The Rev. Michael Way of Christ Episcopal Church in Middletown wore a mask for the Catholic sacrament while outside the nursing home, a VA facility, in Lyons.

"He was lying in his bed on the other side of the glass," Way explained to Fox News. "His face was turned toward me, though his eyes were shut. I wasn't sure if he was even conscious, but as I said the Lord's Prayer, I could see his lips move, mouthing the words of the prayer."

The nursing home and the pastor originally planned for last rites over the phone, but cell reception was poor and staff members weren't comfortable holding the phone to the COVID-positive parishioner's ear.

Rev. Michael Way of Christ Episcopal Church in Middletown, New Jersey, recited the last rites through a window for a parishioner in the nursing home. (Courtesy of Michael Way)

"It was more powerful than I could have imagined," said Way, who drove an hour to the home and was led to the window by a case worker.

"I was overwhelmed and so grateful for this opportunity to bring this sacrament to him," he added. "And of course, whether I performed last rites or not, he was not alone. God was with him."

That's been his message since no one has been able to physically gather. "We can still find and experience community in so many other ways," Way said.

The priest at Christ Episcopal has been livestreaming 14 services of the Holy Eucharist or the Daily Office every week.

Parishioners have told him it's been the most engaged they've ever been, texting, calling, emailing and sending handwritten notes to one another.

"We are discovering new and different ways of experiencing church together," Way concluded, "and this has proved to be a wonderful and spirit-filled thing.