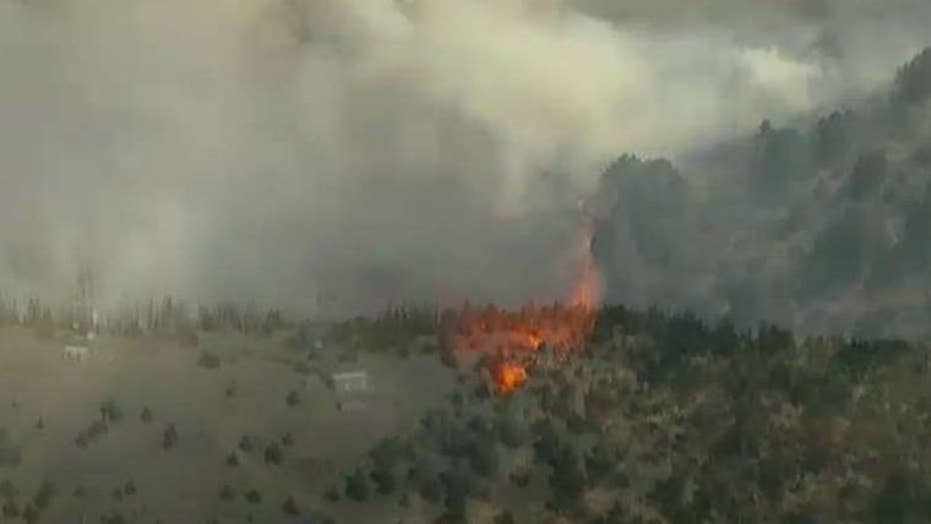 More than 300 people have been evacuated as the Colorado wildfire continues to grow.

A wildfire burning in central Colorado continues to grow as air quality advisories were issued for parts of the state Saturday due to smoke and up to 300 people have been evacuated.

The Decker Fire has been burning since Sept. 8 after it was started by a lightning strike, but in recent days has been growing as windy weather pushed the blaze closer toward homes in the area.

The National Interagency Fire Center said late Saturday the wildfire's northernmost burn area is about two miles south of Salida, Colo., located about 100 miles west of Pueblo. The blaze has grown to about 5,921 acres and is only 5 percent contained.

"It's kind of nerve-wracking because you know there's homes up there," Salida resident JoAnna Fisher told FOX31 on Saturday and she watched smoke billowing into the sky from her front porch.

The blaze has spurred mandatory evacuations in several subdivisions, causing some 300 people to be evacuated from about 130 homes. The Chaffee County Sheriff's Office said on Facebook that one home has burned so far in Fremont County while another has burned in Chafee County.

Decker Fire has been burning since Sept. 8 after it was started by a lightning strike. (Decker Fire Information/Facebook)

Around 806 personnel are assigned to the fire, which has closed multiple roads in Chaffee, Fremont and Saguache Counties.

“Hopefully they get it under control," Salida Tyler Fisher told FOX31.

Officials issued a red flag warning on Saturday out of concern that high winds from the west could push the blaze eastward.

"Once established, wind-driven spot fires could spread quickly," officials said on a Facebook page set up to monitor the blaze.

TEXAS MAN STRUCK BY LIGHTNING HAD SHOES, SOCKS 'BLOWN OFF HIS FEET'

The Thornton Fire Department shared photos to Twitter of aircraft being deployed to help fight the blaze.

By Saturday night, the fire was reported to be "less alive" than in previous days, but officials were cautious that strong winds could "increase fire behavior."

An evacuation center has been established at the First United Methodist Church of Salida. The sheriff's office said that the Chaffee County Fairgrounds is in need of donations of hay, to assist in feeding evacuated animals.

Humidity levels are expected to rise on Sunday, but strong winds are forecast to return by Monday that may fan the spread of flames this week.