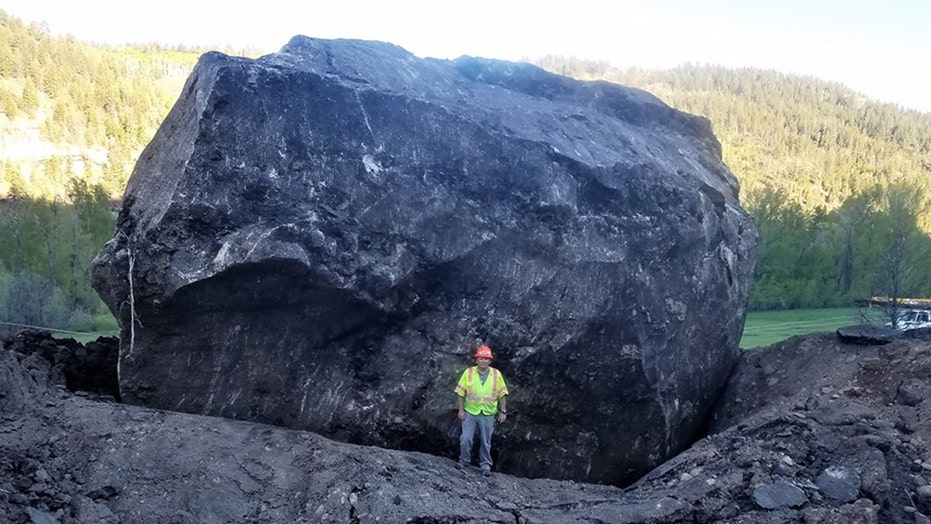 A highway along a Colorado mountainside is closed for the foreseeable future after a pair of massive boulders rolled downhill and left the roadway impassable, officials said Saturday.

The city of Ouray said on Facebook the "significant" rock fall took place later Friday afternoon along Colorado Highway 145 about 12 miles north of Dolores, located in the southwest part of the state.

"The slide consisting of dirt, rock and two huge boulders -- which have destroyed the full width of the highway pavement, leaving a trench approximately 8 feet deep across both lanes," city officials said.

A photo posted by the city shows a person standing in front of one of the boulders, which officials said is the size of a building.

A "significant" rock fall left a pair of massive boulders along Colorado Highway 145 about 12 miles north of Dolores on Friday afternoon, according to officials. (City of Ouray)

The Colorado Department of Transportation said on Facebook the boulder that sits on the highway is estimated to weigh 2.3 million pounds.

Another large boulder carved an 8-foot trench as it went over the roadway, and is estimated to weigh 8.5 million pounds, according to CDOT.

It’s relatively common for boulders and smaller rocks to fall on mountain highways, particularly in spring after the repeated melting and freezing of snow and ice creates new fissures on the mountainside.

But Friday’s afternoon rock slide along state Highway 145 between Cortez and Telluride was unusual in that it began on a slope about 1,000 feet above the highway, according to FOX31.

Ouray officials said a geo-technical team, equipment and supplies are being mobilized to the site, but it is not known when the road can be reopened. The bolder that remains embedded on the highway needs to be blasted into smaller pieces in order to move it, according to officials.

Once the slope above is deemed safe, state officials said they plan to build a shoulder along the damaged roadway so at least a single lane of traffic can be opened.