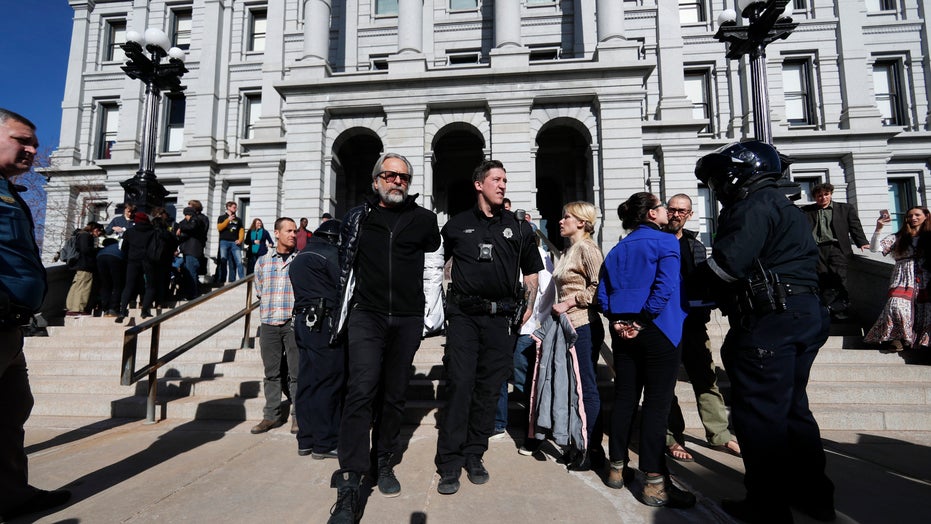 At least 38 people were arrested and forced out of the Colorado State Capitol on Thursday for urging climate change action during the annual State of the State address.

Numerous protesters, many affiliated with the Extinction Rebellion and Sunrise movements, were seen being dragged out of the building in handcuffs.

They were taken into custody on charges of trespassing, disrupting a lawful assembly and obstruction of a peace officer, according to the Denver Police Department.

A Denver Police Department officer leads away one of several anti-fracking protesters who interrupted the State of State speech by Colorado Gov. Jared Polis in the State Capitol Thursday, Jan. 9, 2020, in Denver. (AP Photo/David Zalubowski)

Just minutes before Colorado Gov. Jared Polis arrived at the House of Representatives in Denver, some protesters in the upper chamber put up signs and were heard chanting anti-fracking slogans.

Colorado Gov. Jared Polis waits outside the chambers of the House of Representatives to be introduced and deliver his State of State speech in the State Capitol Thursday, Jan. 9, 2020, in Denver. (AP Photo/David Zalubowski)

A large banner reading "NO MORE SACRIFICE ZONES" was draped over the railing while a protester was heard shouting "Ban fracking now!"

"I'm here to exercise my First Amendment rights in the face of a climate emergency," another protester told police before he was lifted from his chair and dragged him out of the upstairs area of the chamber by both arms.

WARREN'S CLIMATE CHANGE PLAN: NO NEW HOMES OR BUILDINGS UNLESS THEY'RE CARBON-NEUTRAL

In his address, Polis said his administration has made great progress on climate change, including cutting greenhouse gas emissions and creating of a new office to aid workers impacted by the shift of clean energy, according to Westworld. The protesters felt the governor needed to do more to shift away from fossil fuels, the outlet reported.

Hours after the demonstrators were arrested, Colorado Sen. Julie Gonzales went on Facebook to share her thoughts on the issue.

"To the protesters: I appreciate your sense of urgency for climate action," she said. "I hope you continue to participate in the 'inside' game of politics (attending and testifying at committee hearings, working to pass legislation, and voting, assuming you are able to do so), and in so doing abide by the rules of the game."

A GoFundMe page was set up following the protesters' arrests to assist them with legal support and bail money. It raised about $8,000 in a period of 12 hours.