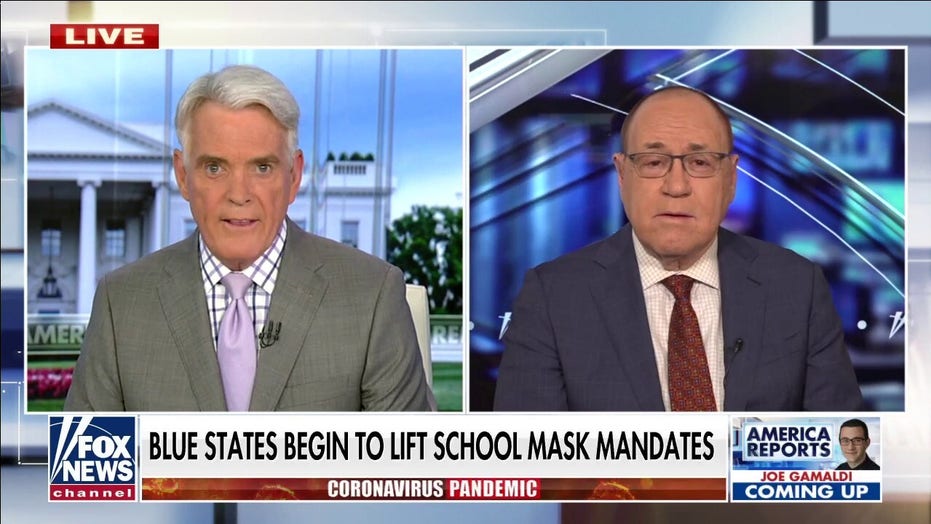 The Fox News contributor joined 'America Reports' to discuss the latest in rolling back mask requirements in the classroom.

New Yorkers without children are much more likely to think that the school mask mandate should stay in place than parents in New York whose children are affected by the policy, according to a Siena College poll released this week.

The indoor mask mandate was dropped for bars, restaurants, and other venues earlier this month, but Gov. Kathy Hochul said that she would wait until March to decide whether to lift the mandate for schoolchildren.

Kindergarteners wear masks while listening to their teacher amid the COVID-19 pandemic at Washington Elementary School on Jan. 12, 2022. (AP Photo/Marcio Jose Sanchez, File)

Less than half, 46%, of parents with children in their household said that the governor should wait until early March before lifting the school mask mandate, while 13% said it should be lifted after kids return from this week’s Midwinter break, and 40% said it should have already ended.

Nearly two-thirds, 64%, of New Yorkers without children said that the governor should wait until next month to make a decision on lifting the school mask mandate, while 8% said it should be lifted after this week and only 25% said it should have already been lifted.

Several states with democratic governors have lifted their mask mandates for adults and schools in recent weeks, but New York, California, and Illinois announced plans to keep their school mask mandates in place while lifting them for businesses.

Gov. Hochul said on Feb. 15 that she'll look at vaccination rates, infections rates, and other metrics in early March when assessing whether to lift the mask mandate, but said there's no "magic number" driving the decision.

An Illinois judge issued a temporary restraining order striking down Gov. Pritzker’s school mask mandate earlier this month, but the governor said he will ask the state Supreme Court to review that ruling.

Masked students wait to be taken to their classrooms. (AP Photo/Denis Poroy, File)

Gov. Gavin Newsom has not lifted California's school mask mandate, but some school districts in the state have defied it and voted to make masks optional.

Several other states have left it up to districts and counties to determine their own policies, while some states like Florida and Texas have banned districts from mandating masks altogether.