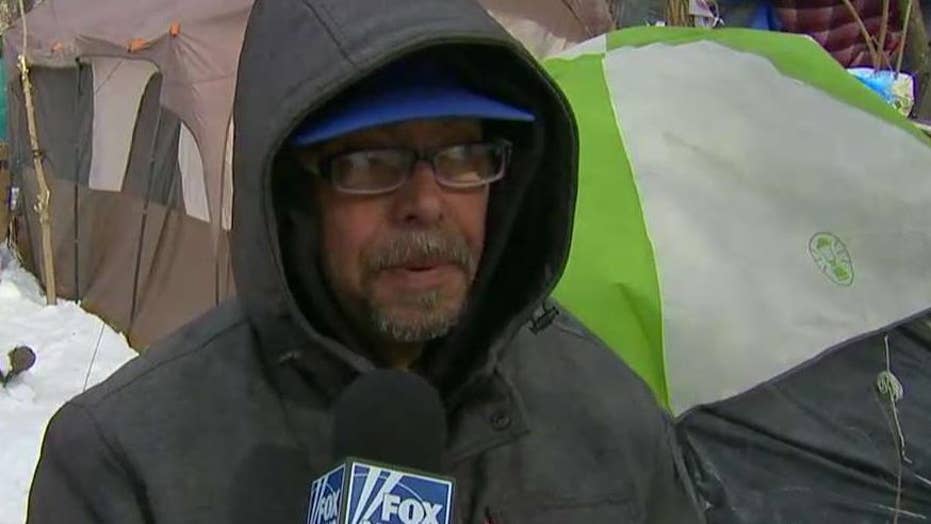 A dangerous polar vortex brings the coldest temperatures in decades to the Midwest; Mike Tobin reports from Chicago.

As a record-breaking bitter cold blanketed Chicago on Wednesday, a Good Samaritan offered to put 70 homeless people into hotel rooms after the group's propane tanks were confiscated after an explosion.

The group had set up tents and spent the night near the Dan Ryan Expressway on the city's South Side as temperatures sank to negative 22 degrees amid the polar vortex when one of about 100 donated propane tanks the group was using exploded.

The blast drew the response of the Chicago Fire Department, which confiscated the remainder of the tanks.

"During extreme cold weather, we understand that people want to help our homeless population," the fire department said on Twitter. "However, we ask that under no circumstance should you donate propane tanks which are potential fire hazards. Propane tanks can cause potential fires and explosions."

Salvation Army spokeswoman Jacqueline Rachev told the Chicago Tribune that city officials contacted the organization about their actions at the camp. The Salvation Army was about to move the people to a warming center when the city called again and informed them of the gesture by the anonymous donor.

City officials in Chicago have been scrambling to get the homeless population off the streets as the polar vortex has blanked the region with arctic air. (FOX32)

“Isn't that wonderful? At least they’re warm and they’re safe," she told the paper. "All the folks there, some wonderful citizen is going to put all of them up at a hotel for the rest of the week."

HOW DOES A PERSON FREEZE TO DEATH?

Rachev was not sure of the identity of the good Samaritan, telling the Tribune she only knew the hotel was on the city's South Side.

A Good Samaritan offered to pay for hotel rooms for 70 homeless people who were camped out in tents in the bitter cold that blanketed Chicago. (FOX32)

Officials in Chicago had been scrambling to get thousands of homeless people with no place to go into warm locations due to the extreme cold creating deadly conditions for anyone left on the street.

At least 10 people -- including a college student and Indiana police officer -- are dead as a result of the bitter, record-breaking deep freeze brought on by the polar vortex that's slammed the Midwest most of the week.