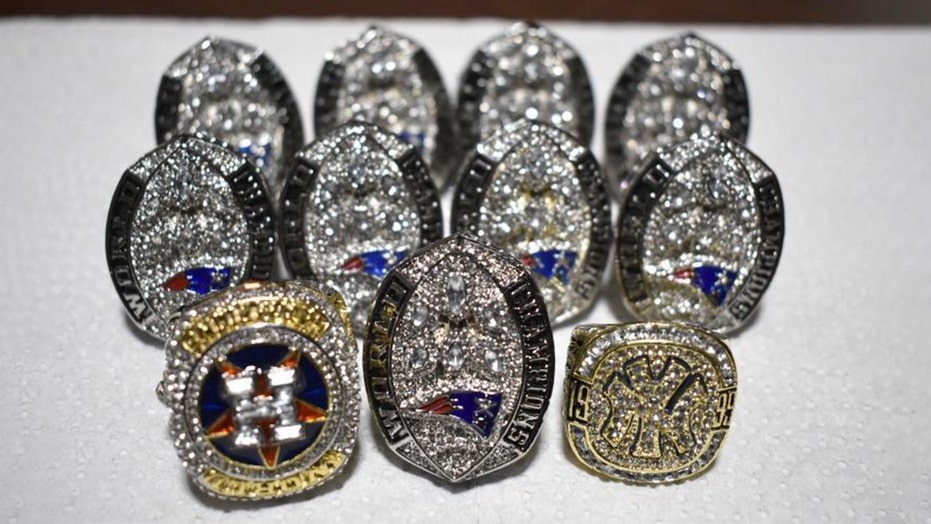 Philadelphia Customs and Border Protection (CBP) officers seized 11 counterfeit Super Bowl and MLB World Series rings in Pennsylvania earlier this month that would have been worth $526,000 if authentic, officials said Wednesday.

On Nov. 7, CBP confiscated nine New England Patriots rings, one New York Yankees World Series ring and a Houston Astros championship ring -- all of them fakes, according to the agency.

The express air package from China was manifested as a "box" with a $14 value and was en route to Drexel Hill, Pa., -- "of all places," CPB said. The Patriots are scheduled to go head-to-head with the Philadelphia Eagles on Sunday in Philly in what is expected to be a season-defining game.

“Scammers and transnational criminal organizations take advantage of collectors and sports fans who desire to obtain a piece of sports history to line their pockets with illicit financial gains,” according to Casey Durst, CBP’s Baltimore field office director of field operations.

“Customs and Border Protection will continue to work closely with our trade and consumer safety partners to intercept counterfeit consumer goods that can harm American consumers and our nation’s economy, and steal revenue and brand integrity from U.S. businesses and trademark holders," Durst added.

Nine of the 11 counterfeit championship rings were for the New England Patriots. (Customs and Border Protection)

Championship rings are awarded every year to the Super Bowl winners. The rings are usually made with gold and diamonds. Replicas are often manufactured and sell for a fraction of the cost.

Officers worked with the agency's trade experts, the CBP's Consumer Products and Mass Merchandising Centers for Excellence and Expertise, along with league and team trademark holders in order to verify that the rings were fake, CBP said.