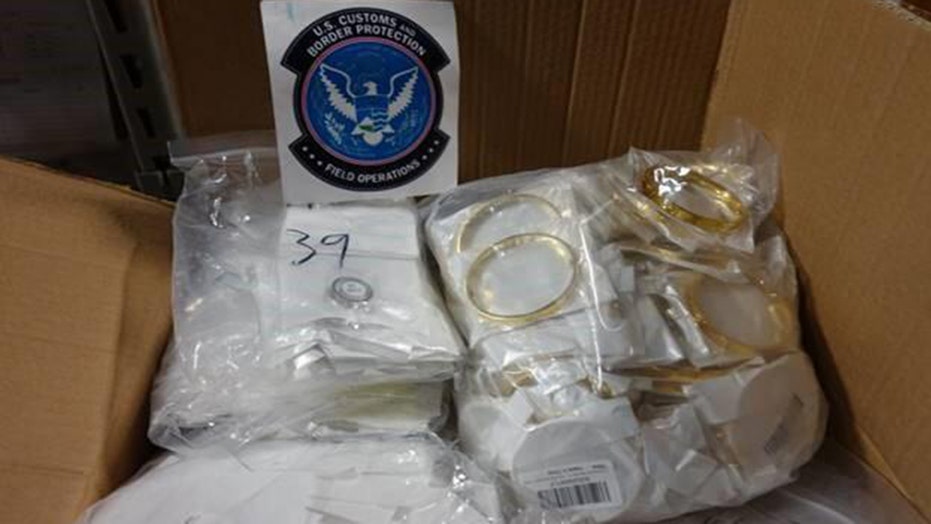 Counterfeit bracelets and other jewelry that could have been sold for more than $90 million had it been real were recently seized at the Express Consignment Operations hub in Louisville, Ky., Customs and Border Protection (CBP) announced Wednesday.

Officers seized three shipments of fake goods, totaling $42 million, from July 17-31, which led to the arrest of a North Carolina pastor who had a stockpile of more than 3,200 counterfeit Cartier bracelets, authorities said.

North Carolina Secretary of State Elaine Marshall announced Aug. 2 that church pastor JianGang "Frank" Lan was charged with felony criminal use of a counterfeit trademark, according to CBP. He is being held on $25,000 bail at the Orange County Jail.

CBP also confiscated five shipments of fake jewelry that would have been worth more than $48 million from Sept. 9-17, the agency said.

In a three-month time frame, Louisville CBP officers at the Express Consignment Operations (ECO) hub in Louisville have seized multiple shipments of counterfeit jewelry, potentially worth millions if sold as the real thing. (Customs and Border Protection)

“When purchasing items from a vendor over the internet, if it seems like too good of a deal, it is. A Cartier bracelet listed online for $25 is definitely not authentic," Louisville Port Director Thomas Mahn Jr. said.

“Seizures like these will ensure inferior, often dangerous goods do not fall into the hands of everyday Americans," Mahn said, cautioning consumers against purchasing fake jewelry because of such things as toxic materials.

“Counterfeit jewelry is often forged with lead and other hazardous materials unbeknownst to the buyer," he pointed out.

"These seizures protect the rights of the intellectual property rights holder, health and safety of Americans and the reputation of online marketplaces involved in these transactions," Mahn added.

Consumers are advised to shop with caution and to report any suspected illegal activity or trade fraud by calling 1-800-BE-ALERT or by using the CBP's online reporting system.