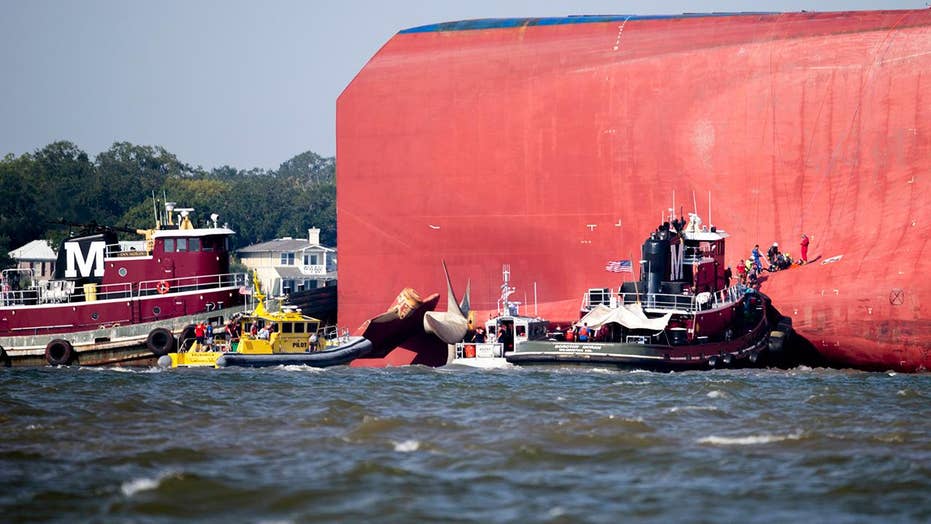 The Golden Ray, a 656-foot vehicle carrier, listed 'heavily' and rolled over in St. Simons Sound near Brunswick, Ga.

ST. SIMONS, Ga. – The cargo ship Golden Ray capsized in 2019 near the port of Savannah and now it's leaking oil.

The 656-foot ship became grounded in St. Simons Sound on Sept. 8, 2019, after departing the Port of Brunswick. At the time, the ship was holding 4,200 vehicles in cargo and 24 crew members were on board.

After the ship capsized, the Unified Command started the process to remove the ship from the port in November 2020.

Unified Command workers decided they needed to cut the ship into eight pieces and remove it piece by piece. However, while removing the sixth piece at the beginning of August 2021 oil started to leak into the Atlantic Ocean.

Now, the fuel is washing up on the shoreline on beaches nearby including St. Simons and Jekyll Island. Dennis Brown and his family drove four hundred miles to vacation at St. Simons sound, but he says this vacation was not what he expected.

"We come in Friday, and Saturday we could hardly get on the beach because of the oil. When the tide goes out its awful it’s in the rocks, on the beach, it smells like crude oil," Brown said.

Dennis Brown points into the St. Simon sound where oil is leaking from the Golden Ray. (Jayla Whitfield/FNC)

Residents like Syrilla Deangelis who live on St. Simons Sound have been watching the process of the ship removal since it began.

"We’ve been out there every day looking at it, almost every day we keep up with how many pieces are taken away," Deangelis said.

Syrilla Deangelis enjoys the beach often as a resident of the St. Simon Sound. (Jayla Whitfield/FNC)

"On Saturday while we were lifting the Golden Ray wreck, we had a discharge of oil inside the protection barrier. As the tide shifted some of that oil went underneath the barrier," Himes said.

The Unified Command has removed five pieces of the Golden Ray since they started the removal in November 2020. (Jayla Whitfield/ FNC)

Himes said he can’t predict if they will continue to see a discharge of oil. However, every time they have tried to lift the sixth piece, fuel seeps out.

"We’re very concerned, when we see impacts like this. It’s fair to say this is what we would call a worst-case scenario. These are the kind of the scenarios that we plan for well in advanced before we start removing the ship and even when you have all the infrastructure and personnel in place you can still learn things about the environment," Himes said.

The oil is problematic because it can easily transfer on the bottom of people’s feet and put the wildlife in danger, Himes explained. Crews are working from sunrise to sunset quickly to remove the oil from the shoreline.

"We have about 70 people that are dedicated to just shoreline clean up that is in addition to the almost 30 vessels and their crews that are inside and outside the protection barrier collecting oil," Himes said.

Thus far, clean-up crews have removed over 35,000 pounds of oily sand from the shoreline on nearby beaches.

The Georgia Department of Public Health is warning beachgoers to stay aware while on the beach. They have also provided a national response center hotline where residents can report any oil they come across.

The removal of the ship from one of the largest ports in the country is still in progress but the oil spill has caused a delay. "I guess all that takes time. I’m just glad there on their last couple of pieces," Deangelis said.

Himes said the Unified Command is still working around the clock to remove the ship but their operation has significantly slowed down.

"It’s just a reminder why we are here that’s to eliminate the threat that the wreck possess on the environment while being as safe as possible and maintaining critical port functions in the process," Himes said.