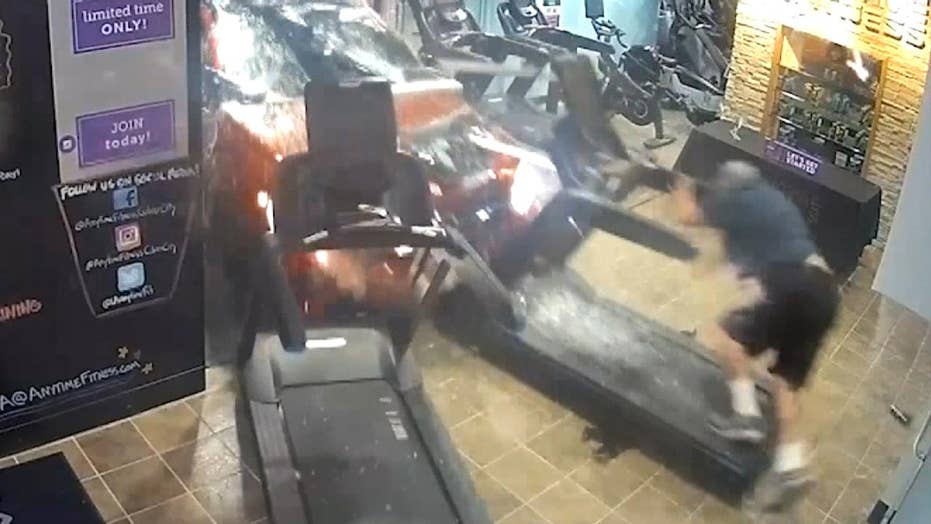 Man who was injured after a woman crashed her SUV through a Culver City, California building says it's a 'miracle' he's still alive.

This man's workout nearly killed him -- and it had nothing to do with exercise.

Samuel Kiwasz was at an "Anytime Fitness" gym in Culver City, California on March 29 when an SUV smashed through a window and struck him as he was on a treadmill warming up before a group training class.

"It's a miracle that I'm alive," he told FOX11. "All of a sudden there was this loud crash and the glass came flying and I got hit, and I got shoved back and I went flying and rolled to the side so I wouldn't get crushed."

Security cameras at the gym captured the moment that Kiwasz was on a treadmill at 5:49 a.m., before the Mercedes SUV slammed into the building through a window, ramming the treadmill into a back wall.

Samuel Kiwasz was nearly killed after an SUV slammed through a window at a gym as he was on the treadmill. (FOX11)

"All of a sudden there was this loud crash and the glass came flying and I got hit here by the treadmill," he told FOX11. "And I got shoved back. And I went flying. And I rolled to the side so I wouldn't get crushed."

Others in the gym, including trainers, rushed to help get Kiwasz off the floor.

The woman behind the wheel claimed her brake pedal didn't work, according to FOX11. (FOX11)

"I ran over here and saw blood coming out of his mouth. And I remember picking him up and sitting him down, wiping the blood off his face," said trainer Cruz Cueva. "And the first thing he told me was 'I'm sorry for ruining everybody's workout.' And I was like 'you don't get to apologize!'"

The driver, a woman who wasn't wearing shoes, then got out of the SUV before trying to get back in -- but an undercover police officer who happened to be working out stopped her.

Employees told FOX11 the woman, who has yet to be identified, told police her brake pedal didn't work.