Rebecca Parker Mankey was reported missing after leaving Lake County where she was visiting a friend on April 18. (Lake County Sheriff's Office )

Rebecca Parker Mankey, 46, didn’t return to her Palo Alto home after a trip to Lake County, the Lake County Sheriff’s Office said. She is believed to be in Aberdeen, Wash., based on cell phone activity that placed her there. Investigators believe Mankey was hiding out amid the negative attention received from the coffee shop incident.

“We have nothing that makes us think she’s at-risk,” Sgt. Aaron Clark of the Lake County Sheriff’s Office told the San Jose Mercury News in a phone interview late Friday night. “We’ve determined from the people we’ve talked to that she is voluntarily missing.”

Mankey’s friend, Melissa Demyan, wrote in a Friday Facebook post that she had not heard from Mankey in over 24 hours.

"My friend Parker is missing," she wrote. "It's been over 24 hours since anyone has seen or heard from her. I last saw her when she was leaving Lake County to head home yesterday.... Parker if you're reading this: we love you so so much and we just want to know you're safe. Please let us know you're okay!"

Mankey received national attention earlier this month after she yelled and berated a man wearing a MAGA hat inside a Starbucks in Palo Alto.

"He will never forget me and will think seriously about wearing that hat in my town ever again," she wrote in a Facebook post after the incident, according to the paper. "If you see him in this hat, please confront him. You do not want to be the person who didn't speak up as we slipped into fascism."

The man, who was identified as Victor, told local media outlets that Mankey called him a racist and other names.

“This woman came over and not only started screaming at me, she turned to the Starbucks audience and said, ‘Hey, everybody come here! This guy's a racist! This guy hates brown people!’” he said. 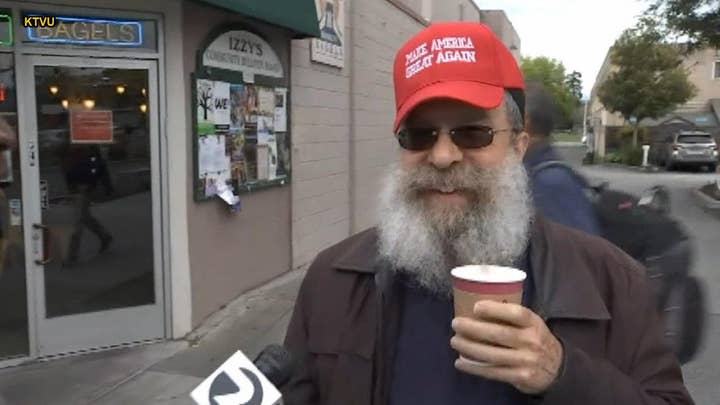 Mankey's social media post sparked a firestorm and she ended up losing her job at Gryphon Stringed Instruments, a company that sells, rents and repairs used and vintage musical instruments. She also received numerous threats online and stepped down from her role as co-chair of the Bayshore Progressive Democrats.

“Parker felt strongly that she wanted to use her privilege as a white woman to stand up for those who are living in fear because of the hateful atmosphere fostered by Trump,” the club wrote on its Facebook page.