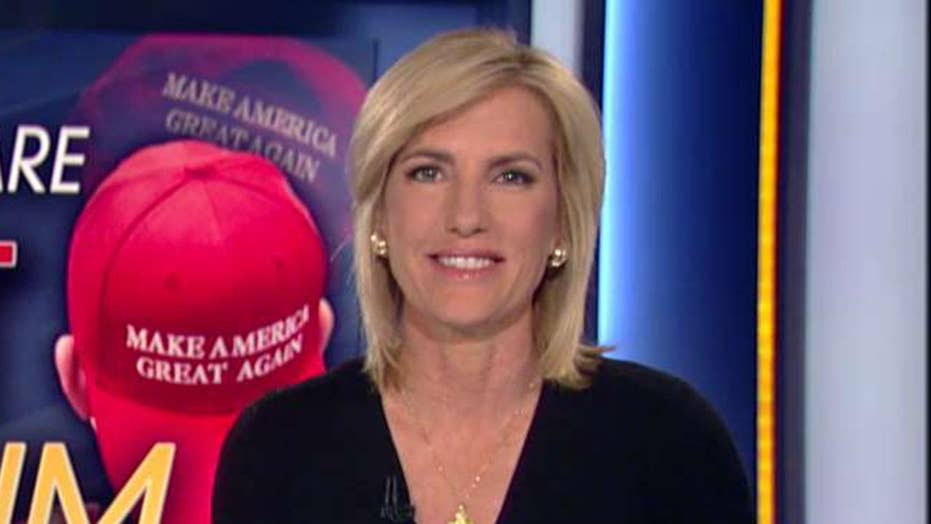 Ingraham: The hat that dare not show its brim

Why is the left so triggered by MAGA hats? Democrats view hats as symbols of 'white supremacy.'

Do you know what radicalizes people? I do, because it recently happened to me.

For people of faith and pro-life advocates like me, sparks igniting outrage and radicalization are everywhere: In the Covington Catholic High School kids who were falsely smeared, ridiculed and then threatened; in the cheers from the left at the signing of a law that allows babies to be aborted when they’re mere moments from being born.

In the 2016 election, Donald Trump was not my first, second or third choice. I wasn’t sure I could trust his pro-life promises, which were the only reasons I had to vote for him.

In the end, I chose President Trump because the alternative was the radically pro-abortion Hillary Clinton, and too many lives were at stake. We’d come too close to changing our generation’s view on abortion; we couldn’t let our courts be overtaken by judges who are in the pockets of the abortion industry.

So I voted for President Trump, and he has upheld his pro-life promises. I now believe that he will go down in history as the president who did the most to advance the cause of ending legal abortion.

However, I hadn’t become a Trump apologist, and I never owned or wore a Make America Great Again (MAGA) hat. In fact, I snickered (too many times to count) about how kitschy they are, with that horribly plain front. I didn’t see the appeal.

Make America Great Again has nothing to do with slavery or race. The MAGA hat is not the equivalent of a Confederate flag. It has become popular for one reason and one reason only: The political left hates it almost as much as they hate Donald Trump. It’s become the symbol of his presidency.

The left’s outrage for this simple headgear is almost funny. Aren’t they the ones proudly sporting pink pussyhats and the dreary Handmaid’s Tale garb? Maybe they’re angry that they don’t have a monopoly on fashion as a political statement.

The hats are meant to harken Americans back to better days – not the dark days of slavery and segregation, but days when lawmakers actually got along and compromised; when Democrats were actually allowed to be pro-life; when Americans didn’t check their neighbors’ political affiliation on Facebook before deciding if they could be friends.

And this week, I’m purchasing my MAGA hat, and I plan to wear it proudly.

Because of what happened to Nicholas Sandmann – the high school junior who wore it at the March for Life and became the innocent target of a national media circus. Because babies can now be legally killed in New York up until the moment of birth. And because to celebrate this “victory for human rights,” the Catholic Governor of that state, Andrew Cuomo, had New York City’s iconic buildings lit up in pink, including One World Trade Center.

Think about that – a building created in remembrance of the horror and destruction and death of 9/11 was crudely lit up to celebrate an expanded legal “right” to end a life. Did Gov. Cuomo ever stop to consider that pregnant mothers and their pre-born children died together on September 11, 2001 and are now memorialized in a museum on that hallowed ground?

I recently published a column in USA Today. Editors spent hours fact checking it to ensure that my message was completely verified. But this week, I read a USA Today column arguing that the entire state of Kentucky – the governor and esteemed Senator Mitch McConnell included – is racist. And I wonder, how did they fact check that?

You wear your pink hat, and I’ll sport the red one, because the mainstream media and culture don’t get to tell me what to believe.