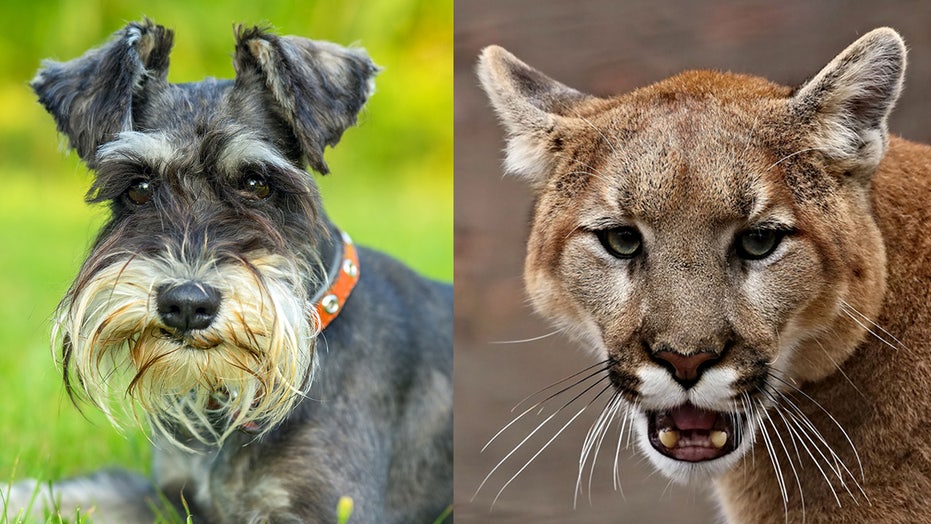 A Southern California woman tried to protect her dog from a mountain lion that wandered into her backyard on Thursday by punching the wild cat in the face and prying its jaws open in an attempt to save her pet.

The woman's miniature Schnauzer, named Pumba, was killed during the attack in residential Simi Valley, just before 2:30 a.m. on Thursday morning, according to the pet owner's brother, Brian. She had decided to take the 10-year-old dog out for a bathroom break before bed when it saw the cat and decided to charge the larger animal.

CALIFORNIA MAN ACCUSED OF DRUNKEN ATTACK ON JAIL GUARDS DURING ARREST CLAIMS HE WAS VICTIM OF 'RACIST' BEATING: REPORTS

A Southern California woman sought to protect her dog from a mountain lion that wandered into her backyard on Thursday -- punching the wild cat the face and prying its jaws open in an attempt to save her miniature Schnauzer (like the one pictured left).  (iStock)

"She kept trying to stop the mountain lion from killing the dog for all she could," Brian continued. "She said she was punching it and kneeing it in the head and trying to pry its jaws open, and it just wouldn’t let go. The whole time she could hear her baby dying right in front of her, and there was nothing she could do."

The woman suffered a minor cut as a result of the attack, which occurred about 35 miles north-west of downtown Los Angeles.

“She obviously cared about her dog very much, as all dog owners do,” Police Sgt. Keith Eisenhour told KNBC-TV.

Police Commander Adam Darough told the Ventura County Star that responding officers saw the lion eating Pumba, but it quickly took off into the hills.

Just hours earlier, a similar attack occurred in the same neighborhood when an 8-year-old Havanese named Sammy was out for a walk with a family member on Evening Sky Drive when it came face to face with a mountain lion. The dog's owner, Michael Cheng, said the dog walker threw a jacket over the lions head and hit it repeatedly so it would drop Sammy.

“I certainly hope that the Animal Control could somehow set a trap to capture the mountain lion, because it’s putting everyone in danger here,” he told KTLA at the time.

The mountain lion was originally seen in the area on Wednesday, with the Simi Valley Police Department receiving a report of the big cat in the Indian Hills neighborhood around 11:40 a.m, according to the Guardian.

Four police officers, a helicopter and animal control searched for the mountain lion, but couldn't find anything.

Darough told the outlet the mountain lion seen on Wednesday was wearing a tracking collar used to track lions in the region, although they weren't sure if the big cat that attacked Pumba also had a collar.