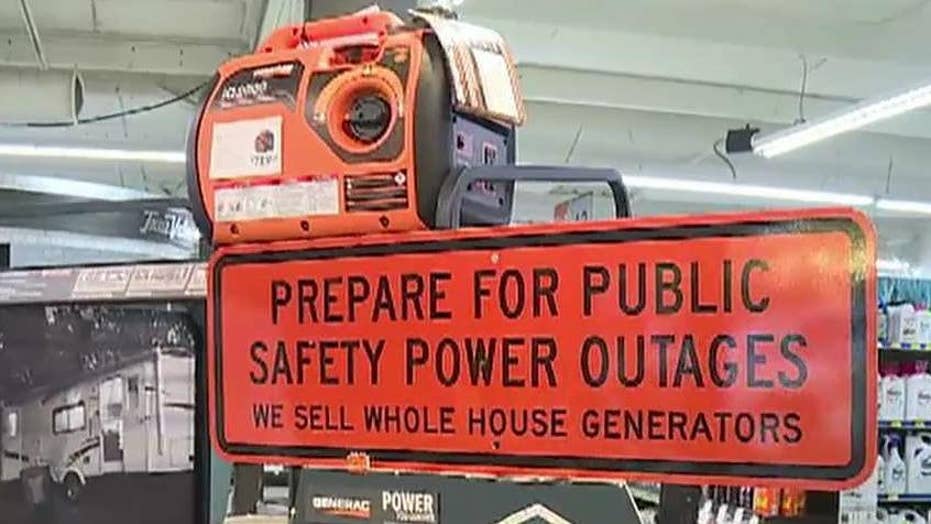 PG&amp;E cuts power to 24,000 customers as multiple counties are under a fire warning; William La Jeunesse reports from Los Angeles.

The largest utility in California has warned it may cut off power for large parts of the northern part of the Golden State starting Wednesday and Thursday to prevent its equipment from sparking wildfires during expected warm, windy weather.

The National Weather Service has issued a red flag warning from 5 a.m. Wednesday until 5 p.m. Thursday for the North Bay Mountains and Valleys and East Bay hills and valleys in the San Francisco Bay Area due to "extreme fire danger."

"Really extreme fire weather is what we're looking at right now, what the weather models are showing,” Cal Fire Chief Mike Mohler told FOX40 on Monday, adding: "This is the largest, most concerning event that we've had in 2019."

Cal Fire said the agency is preparing for a widespread period of conditions that could allow blazes to spread and is starting additional aircraft, ground crews, and personnel to respond if needed.

A similar warning has been issued for the Santa Cruz Mountains from 5 p.m. Wednesday through noon on Thursday due to a combination of "gusty and potentially strong, damaging north or northeast winds" combined with low humidity.

"Strongest winds are expected in the hills, but gusty winds will develop locally in the valleys and near the coast as well," the NWS San Francisco Bay Area office said in a forecast discussion. "These conditions will result in critical fire weather conditions from Wednesday into Thursday, especially across the  North Bay, East Bay, and Santa Cruz Mountains."

Forecasters said the windy stretch of weather may be the strongest offshore wind event in the area since the October 2017 North Bay Fires.

In Northern California, Pacific Gas & Electric announced possible blackouts in 30 northern and central counties starting Wednesday that could affect more than 600,000 customers. The utility said that, based on the latest forecast models, the peak winds will occur from early Wednesday morning to Thursday midday and customers may be affected by a power shutoff even if they are not experiencing extreme weather conditions in their specific location.

Pacific Gas &amp; Electric said it could cut off power to a large swath of Northern California later this week to prevent its equipment from starting wildfires during hot, windy weather. (AP Photo/Rich Pedroncelli, File)

“This is shaping up to be one of the most severe dry wind events we’ve seen in our territory in recent years and we want our customers to be prepared for an extended outage that may last several days," Michael Lewis, senior vice president, PG&E Electric Operations, said in a statement. “We want our customers to be aware that, based on this number, it could take several days to fully restore power after the weather passes and safety inspections are completed.”

While PG&E has not confirmed any power shutoffs, the local police departments have announced that outages are likely.

The Lafayette Police Department said that 21,421 PG&E customers in the towns of Moraga, Orinda, and Lafayette in Contra Costa County could expect a shutoff beginning shortly after midnight on Wednesday and lasting through at least Thursday afternoon.

Pacific Gas &amp; Electric may shut off power in parts of 30 counties in the northern and central parts of California on Wednesday and Thursday due to increased fire danger. (AP Photo/Marcio Jose Sanchez, File)

Officials said area residents should plan for family and pet medical needs, in addition to having enough fuel and water for each person and pet.

"Remember, gas stations, stores and ATMs in the immediate area will be closed," police said, adding, "Know how to use the manual release on your garage door"

On Monday evening around 4:30 p.m. Napa County officials said the utility was shutting off power to customers starting Wednesday morning and may extend five days or longer, KTVU reported.

Cal Fire said the state's top five most destructive fires in terms of structure loss have taken place between September and November, with three blazes erupting in October in weather conditions that were a mix of gusty winds and low humidity. In addition to being careful to prevent blazes during high fire danger periods, officials told FOX40 on Monday that everyone should also have an evacuation plan ready.

"Wildland fires know no boundaries,” Mohler told FOX40 on Monday. “So, that traditional, ‘Oh, I don't live next to a hillside with brush,' no longer exits. If you look at the Tubbs Fire, it jumped the 101 Freeway, six lanes and went into what we would consider an urban neighborhood."

Paradise, California left in ruins from the Camp Fire

42 dead, over 200 missing and 52,000 evacuated in Northern California; Claudia Cowan reports from Paradise.

Next month marks the one-year anniversary of the Camp Fire, the state's most destructive wildfire ever, that killed 85 people and destroyed in excess of 18,000 structures. Power lines owned by PG&E were blamed in sparking that blaze, and the company filed for bankruptcy in January as it struggled with billions in potential liabilities.

Last month, PG&E shut off power to more than 48,000 customers in seven counties in wine country and the Sierra Nevada foothills as the humidity plunged, temperatures rose and winds kicked up. The outages lasted less than a day, and no major problems were reported.

In Sonoma County, PG&E cut power to 700 people in the Santa Rosa area, where the Tubbs Fire in October 2017 killed 22 people and destroyed more than 5,000 homes. In January, state investigators said that blaze was sparked by a private electrical system.

The risk of power outages this week isn't just limited to Northern California. In the southern part of the state, Southern California Edison's website showed Tuesday that more than 106,000 customers in parts of eight counties could face power cuts.

The largest numbers of potentially affected SoCal Edison customers are in Los Angeles County and to the east in San Bernardino and Riverside counties. Also under consideration are areas to the west in Ventura County and to the north in Kern, Tulare, Inyo, and Mono counties.