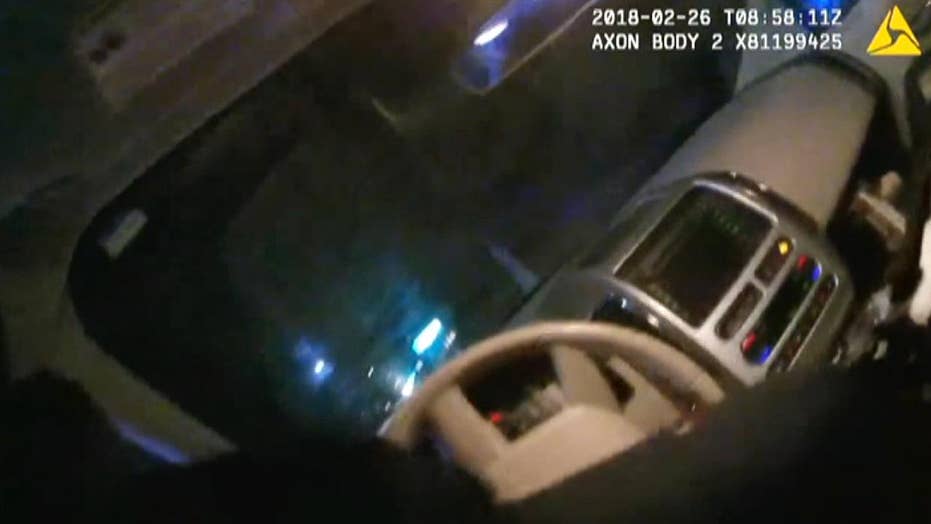 Groton Town Police release shocking footage of 2018 traffic stop incident where an officer was dragged nearly a mile, at speeds up to 50 mph, after a suspect attempted to flee in Connecticut.

A police officer in Connecticut can be heard crying out in a bodycam video for a driver to stop as he hangs halfway out of a vehicle during a traffic stop last year that nearly cost him his life.

The Groton Police Department released the video Friday of the February 2018 incident that began with Officer Tyler DeAngelo pulling over 22-year-old Taj Dickerson.

Officers had been attempting to arrest Dickerson after cocaine and marijuana were found in the vehicle when the 22-year-old ran back towards his car with DeAngelo right behind him.

After jumping into the vehicle, Dickerson drove off -- with the officer hanging halfway out of his vehicle.

"The officer gave countless commands for Dickerson to stop the car as it reached speeds in excess of 50 mph," police said on Facebook at the time.

Groton Officer Tyler DeAngelo can be seen struggling to stay in a car as a suspect drove away in February 2018. (Groton Police Department)

In the video obtained by FOX61, the officer can be heard repeatedly asking the 22-year-old to "stop the car" while hanging on for his life for nearly a mile.

Dickerson was arrested in New London and later convicted of assaulting a police officer and engaging in a pursuit, according to FOX61. He was sentenced to five years in prison, with a sentence suspended after 400 days, followed by three years of probation.

Taj Dickerson, 22, was later convicted of assaulting a police officer and engaging in a pursuit. (Groton Police Department)

Officer DeAngelo was able to make a full recovery from his injuries, according to police.

The department said it wanted to release the video to show how a traffic stop can quickly escalate into a near-death situation.