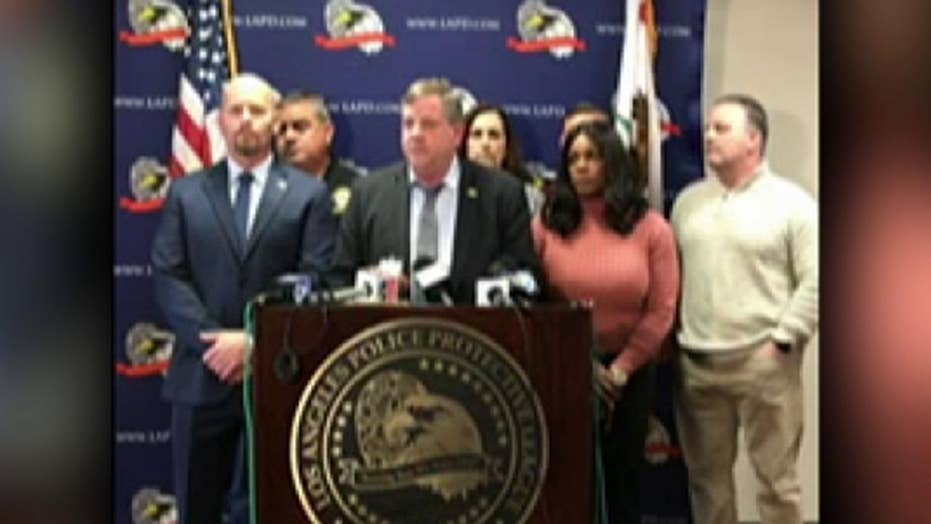 The full board of directors of the LAPPL answer questions regarding the alleged fondling of a deceased female by an on-duty LAPD officer.

A California police officer is under investigation for allegedly fondling a dead woman’s breasts, the Los Angeles Police Department (LAPD) confirmed on Tuesday.

An LAPD spokesman told Fox News that no additional information is being released, but said an administrative investigation has been initiated. He also said the officer has been placed on paid leave and his police powers have been removed during the investigation.

The veteran Los Angeles cop, who is assigned to downtown’s Central Division, was caught on his own body-cam footage allegedly fondling the dead woman, and his supervisors have reviewed the video, according to the Los Angeles Times.

The alleged incident took place when the LAPD officer and his partner responded to a call about a possible dead woman in a residential unit, the newspaper reported, citing sources.

Once the two officers determined the woman was dead, one officer returned to the patrol car to get something, according to the paper, which added that during that time, the accused officer turned off his body camera and allegedly fondled the woman.

The incident was captured on video -- even though the officer deactivated his camera -- because of a 2-minute buffer on the device, according to the LA Times.

“If this allegation is true, then the behavior exhibited by this officer is not only wrong, but extremely disturbing, and does not align with the values we, as police officers, hold dear and these values include respect and reverence for the deceased. This behavior has no place in law enforcement," Los Angeles Police Protective League Board of Directors said in a statement sent to Fox News.

At a news conference on Wednesday, The Los Angeles Police Protective League told reporters that the union will not defend the accused officer in a criminal proceeding, which in many instances is provided by the union. The alleged fondling incident was described as extremely rare, at the press conference.

Last month, the LAPD chief and the union reached an agreement to inspect body camera footage that doesn’t involve arrests or the use of force as a way to make sure officers are following guidelines.

The inspections are also being conducted so that supervisors can determine if additional training is needed.

“Both sides understood that if there was serious misconduct observed that the appropriate steps would be taken, and that’s clearly what happened here,” someone familiar with the agreement to randomly audit the body-cam video told Fox News. The person, who didn't want to be identified, said that supervisors discovered the act during a random inspection of video recordings.

Prior to the agreement, supervisors could review recordings mostly on a complaint basis, and discipline officers for misconduct discovered in videos.