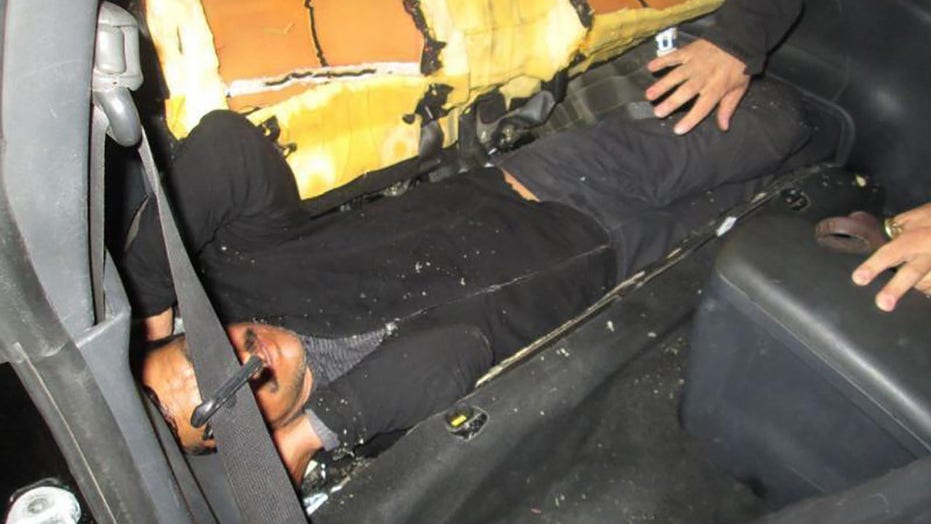 Border officers in Southern California discovered a Mexican national concealed in the seat of a car crossing into the U.S. Monday in what the agency called another example of “inhumane” smuggling.

An 18-year-old woman driving a black Mitsubishi was stopped at the Calexico West port of entry just after 1 a.m., U.S. Customs and Border Protection (CBP) said in a news release. A booth officer sent the driver, a U.S. citizen, and the vehicle for further inspection.

A CBP canine team examined the car and alerted officers to the rear seat, the agency said. A 48-year-old Mexican national was found hidden within “a non-factory compartment” beneath the seat cushions.

CBP officials called the incident "another example of the inhumane tactics" smugglers use to skirt the law. (U.S. Customs and Border Protection)

The man was removed from the vehicle and taken to a secured facility for further processing.

The woman was taken into custody and is being held at the Imperial County Jail, where she awaits criminal proceedings, the agency said.

A canine team alerted officers to the secret compartment beneath the seat cushions. (U.S. Customs and Border Protection)

“The primary focus of our national security mission is to protect the American homeland from all threats,” said CBP Director of Field Operations for San Diego, Pete Flores.

“Although we routinely encounter individuals attempting to enter our country illegally, this incident serves as another example of the inhumane tactics human smugglers will utilize in order to circumvent our laws,” Flores continued.

Smugglers have been busted using a variety of tricks to conceal illegal immigrants crossing the U.S.-Mexico border.