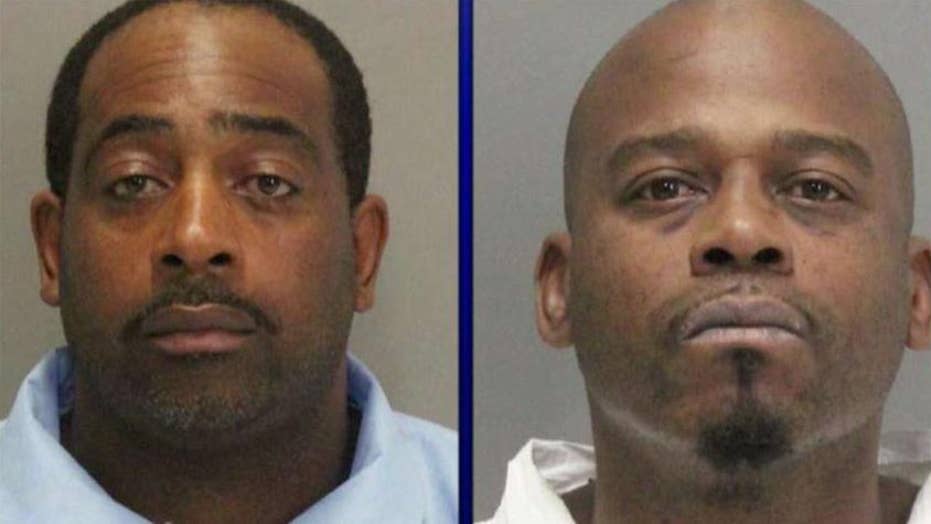 2 men facing armed robbery charges freed themselves from their shackles and hopped in a getaway car in Santa Clara.

Two men charged with tying up employees at gunpoint during a cellphone store robbery made a dramatic escape from a Northern California courthouse Monday, fleeing in a car waiting outside for them in what officials called an "orchestrated escape attempt."

Tramel McClough, 46, and John Bivins, 47, escaped from a deputy escorting them through a public hallway outside a courtroom in the Palo Alto Courthouse around 9:30 a.m. and bolted through an emergency exit, the Santa Clara County Sheriff's Department said in a statement.

"It appears that they were able to come out of the courtroom into the hallway and able to get to one of the exit points, at which point there was a car waiting for them," Sgt. Reggie Cooks said at a news conference.

The two abandoned the car a few blocks away for a U-Haul van, according to Cooks. The men are considered dangerous, and authorities asked the public to call police if they spot the pair and not approach them.

Tramel McClough and John Bivins abandoned a car after they escaped from a California courthouse. (KTVU)

"The level of sophistication and brazenness it takes for the individuals to do that — that is why we're calling on the public and other allied agencies to help," Cooks said.

The Santa Clara County Sheriff's office tweeted a photo of a discarded handcuff key found in the escapees' path.

Both men were arrested in February on suspicion of stealing $64,400 worth of cellphones and other merchandise from a Verizon store in nearby Sunnyvale, KTVU reported.

According to police, the two men were wearing masks when they allegedly forced the store's employees to open the store's safe, and then tied them up and locked them in a bathroom.

One was armed with a handgun and the other with a knife at the time, and were arrested a short time later after a car chase, police told KTVU.

The Palo Alto Police Department tweeted the men were believed to have left the area in a vehicle and officers were not searching for them in the city, which is home to numerous technology companies and Stanford University. The two men live in neighboring East Palo Alto.

The escape is the latest setback for the Santa Clara Sheriff's Department, which runs the county's jails and is responsible for escorting inmates to and from court.

Four inmates escaped from the county's main jail last year by cutting through metal bars and rappelling to freedom using a rope made of clothing and sheets, according to the Associated Press.

Last month, a clerical error led to the mistaken release of an inmate from jail on the day he was sentenced to an 8-year prison term for armed robbery. He was captured a week later. In June, three former jail guards were convicted of murder for beating a mentally ill inmate to death in 2015.