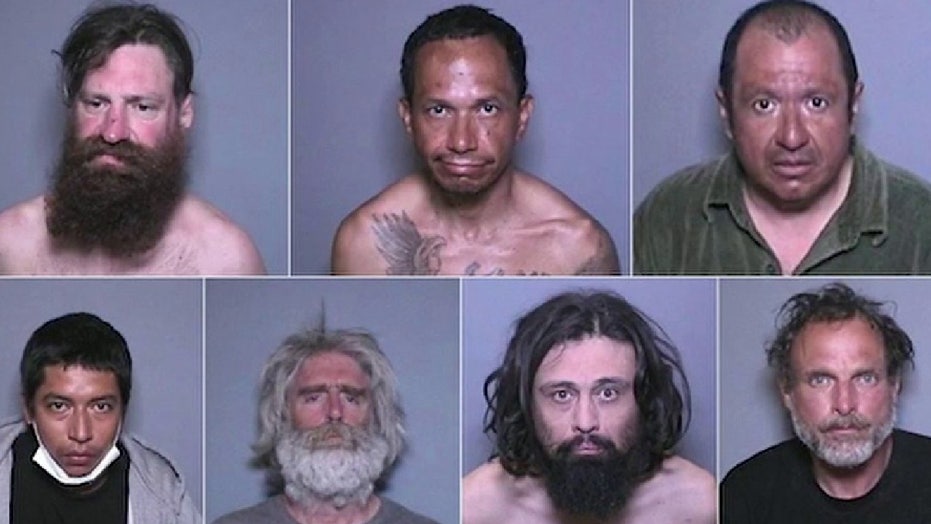 Just days before California's Gov. Gavin Newsom ordered the closure of parks and beaches in Orange County, making it a criminal offense to step foot in the sand, the state ordered the release of seven high-risk sex offenders from the county's jails over concerns they could contract coronavirus.

The court-ordered move prompted the District Attorney's Office to issue a safety warning to the community this week, highlighting that the men are likely to re-offend.

"These kinds of high-risk sex offenders are the most dangerous kind of criminal and the most likely to re-offend," DA Todd Spitzer said in a statement. "They are doing everything they can to avoid detection by the parole officers assigned to monitor them so they can potentially commit additional sex offenses. These are not the kind of people who should be getting a break."

According to Spitzer's office, Court Commissioner Joseph Dane ordered the controversial releases throughout April, despite the men having been charged with tampering with their GPS monitoring devices.

In this Tuesday April 14, 2020, file photo, California Gov. Gavin Newsom discusses an outline for what it will take to lift coronavirus restrictions, during a news conference at the Governor's Office of Emergency Services in Rancho Cordova, Calif. On Wednesday, April 22, Newson announced hospitals can resume scheduled surgeries. It's the first significant change to the state's stay-at-home order.  (AP)

While the issue of coronavirus outbreaks in jammed U.S. prisons has been a cause of concern nationwide in recent weeks, this mandate has proven to be particularly controversial as only a small number of the "non-violent" 3,500 California state prisoners given early release as a result of the virus, officially termed COVID-19, were even tested for the contagion, according to local officials.

Orange County Sheriff Don Barnes also argued in a statement released Wednesday that the jails are not currently overcrowded, social distancing and quarantine measures have been put in place, thus stressing that freeing these inmates was not necessary.

"These inmates were released by court order, and are not in any way connected to the measures I have taken to limit the spread of COVID-19 in the Orange County Jail," Barnes stated. "We have responsibly created the capacity needed in the jail to house sex offenders and other dangerous criminals. I oppose efforts that excuse criminal behavior and jeopardize the safety of our community."

In profiles documented by the local news affiliates of the newly free men as part of the community warning, their ages range from 27 to 52, every single one "has a history" of lewd offenses and has violated the law on multiple occasions.

The released inmates are:

- Luis Joel Ramirez, 27, of Costa Mesa, who has a history of sexual battery, assault with a deadly weapon, resisting a peace officer, burglary and possessing a leaded cane, a deadly weapon, and who prosecutors say has violated his parole four times since 2019;

- Rudy William Grajeda Magdaleno, 39, of Anaheim, who has a history of child molestation, indecent exposure, assault, battery, criminal threats, and inflicting injury on an elder adult, and who prosecutors say has violated parole five times since 2017;

- Calvin Curtis Coleman, 52, of Santa Ana, who has a history of lewd conduct in a public place and has allegedly violated parole three times since 2019;

- Kyle Albert Winton, 40, of Mission Viejo, who has a history of child molestation, criminal threats to cause great bodily injury or death, resisting a peace officer, DUI and hit and run with property damage, and has allegedly violated parole once;

- Jose Adrian Oregel, 46, of Santa Ana, who has a history of unlawful sexual intercourse with a minor, oral copulation of a person under the age of 18, great bodily injury, and being a second striker, and who prosecutors claim has violated parole six times since June of 2019; and

- Mario Ernesto Sandoval, 45, of Stanton, who has a history of sexual battery, touching for sexual arousal, indecent exposure, assault on a peace officer and assault, and allegedly violated parole once this year.

In a separate statement this week, Sheriff Barnes pushed back against the Newsom-ruled shutdown of beaches in Orange County as "wrong," pinning it as a "failure to recognize the sacrifices three million residents have made to curb the coronavirus spread."

"The people of this County compiled with his directives throughout this pandemic and have taken the measures necessary to 'flatten the curve,'" he noted. "I implore the Governor to reconsider his actions and work with local authorities, allowing us to address with few without penalizing the majority. No one should fear being subject to a criminal violation merely for seeking out and exercising healthy activities."