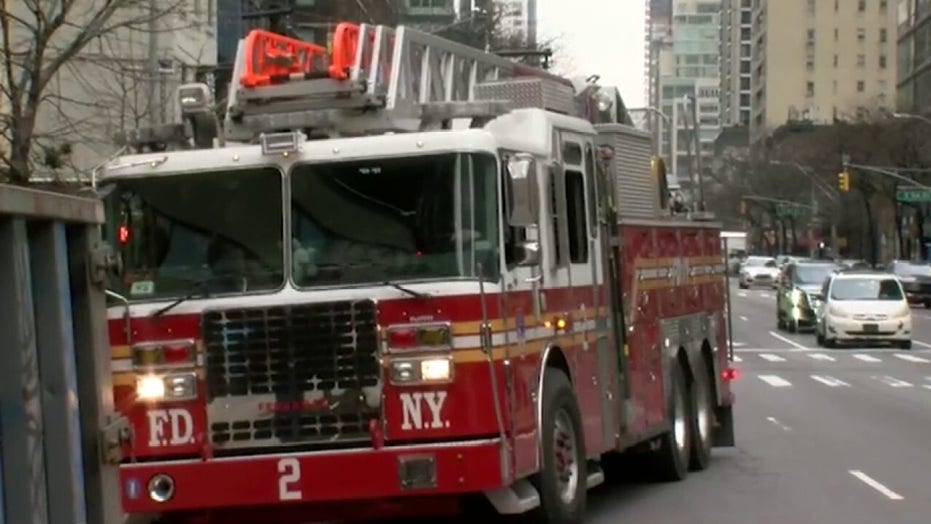 If you thought the confined spaces of cruise ships, nursing homes and once-crowded bars were especially bad petri dishes for the spread of the coronavirus – think again. Public health officials, medical experts, lawmakers and inmates are bracing for the outbreak to continue crippling overstuffed prisons and jails across the country.

"The projections for the toll that the coronavirus might inflict on U.S. cities like New York are terrifying. But for prisons and jails, which are like small cities unto themselves, it is likely to get even more dire. Detention facilities are ripe for the spread of disease, given the rampant overcrowding and subpar health care," Jesse Lerner-Kinglake of Just Detention, which advocates for prisoner rights nationwide, told Fox News. "Worse still, many prisoners have HIV, diabetes, heart disease and other serious illnesses that put them at risk for developing complications from the coronavirus. Imagine New York City, but more crowded and with more sick people — and far fewer medical staff."

As it stands, the novel virus – formally termed COVID-19 – has already infiltrated U.S. penitentiaries on federal, state, and local levels in at least four states, including the hardest-hit regions of New York, which now has dozens of confirmed diagnoses. The rapidly ascending number of cases nationwide has prompted urgent concern for the prison system, ushering in a range of actions aimed at curbing a mass outbreak that would deluge healthcare facilities ill-equipped to contend to a pandemic.

"The handling of these situations vary, but ultimately we can say our system has been ill-equipped to deal with something of this magnitude and the prison system can no longer be society's afterthought," said Michael Mendoza, National Director of #cut50, a campaign to reduce crime and incarceration levels in all states. "With limited access to the proper resources, medical staff, and cleaning supplies, we fear prison systems could be hit the hardest by the virus. It is no wonder; the correctional staff refused to clean the area of the federal prisoners' area where he had previously been because they didn't have proper protective gear."

US STARTS TO RELEASE INMATES DUE TO CORONAVIRUS OUTBREAK

The United States has some 2.3 million inmates spawning around 5,000 jails and prisons across the country and is deemed to have the largest prison population in the world and the largest per capita incarceration rate. According to the Bureau of Justice, nearly 200,000 people aged 55 and older are behind bars.

Inmates stage a protest against new rules to cope with coronavirus emergency, atop the roof of the San Vittore prison in Milan, Italy, Monday, March 9, 2020. Italy took a page from China's playbook Sunday, attempting to lock down 16 million people — more than a quarter of its population — for nearly a month to halt the relentless march of the new coronavirus across Europe. (AP Photo/Antonio Calanni)

Implementing the Centers for Disease Control and Prevention (CDC) guidelines such as routine handwashing and social distancing is especially challenging in such environments. Most inmates not only live in close proximity to one another,but share laundries, baths, and communal eating areas. Hand sanitizer, given its high alcohol content, is also mostly prohibited.

Yet it is not only about protecting inmates from the coronavirus scrouge, but also the many men and women who are tasked with keeping the facilities – and thus the broader communities – safe. The Department of Justice (DOJ) run the Bureau of Prisons (BOP) has already recorded positive coronavirus cases among employees in Texas and New Hampshire.

The growing threat of coronavirus has forced prisons and jails nationwide to start changing longstanding policies and regulations. The likes of Arizona and Minnesota state prisons are now waiving the charges associated with medical visits and for medical supplies.

Some 40 states mandate that inmates must pay for soap and other personal hygiene products, but some – such as Arizona – have turned to issuing such items for free amid the outbreak.

Additional safeguards have included facilities moving to ban visitors, limited inmates' movements, and routinely screen staff for symptoms. Furthermore, at least 15 states – including Texas, New York, California and Ohio – have taken to releasing low-level offenders as well as those in the elderly and sick categories and thus considered most vulnerable to being rendered in a critical condition if they contract the unique pathogen.

Further maneuvers may be yet to come.

"The BOP may need to move inmates to better manage the detention bed space as well as assure that administrative facilities do not become overcrowded beyond available resources," the BOP said in a statement with regards to its evolving action plan. "The BOP emphasizes that all inmates, regardless of where they are being housed, are screened for COVID-19 prior to movement. Both the BOP and USMS are using screening protocols for both inmates and staff."

Some politicians and activists are calling for a much more widespread release of prisoners to help reduce those exposed to the deadly pathogen. For one, Sen. Kamala Harris, D-Calif., is publicly pushing the BOP to free "low risk" inmates, including those in pre-trial detention who do not have the financial means to post bail. Los Angeles County Sheriff Alex Villanueva has already announced that the number of arrests has dropped from an average of more than 300 per day to around 60 in recent weeks in the hopes of limiting cramped cells.

And New York City mayor Bill de Blasio announced last week that his office would begin the process of identifying inmates who are being held on minor and non-violent charges and put in-motion steps for their release.

Yet some experts are sounding the alarm of caution with regards to such a strategy.

"We must strike a balance somewhere. We are concerned about having inmates crowded into close proximity in jails and prisons, but we must also show responsibility when releasing potentially dangerous people upon society," Malcolm Reiman, a former Bronx-based homicide detective, underscored.

Jeff Clayton, Executive Director of the American Bail Coalition, concurred that they are "seeing cases where dangerous defendants are being released that might not have otherwise been released that go on to commit additional crimes."

"Administrative and judicial orders are resulting in an increase in free releases, which we assume is intended to avoid the cost of healthcare for these individuals," he claimed. "However, we would argue, this is not in line with the order of containment because now these persons are out on the streets without housing and will mix with the general population."

As of the end of the weekend, New York officials had acknowledged that at least 38 individuals had already tested positive at facilities across the city, including the notorious Rikers Island – 21 inmates, 12 Department of Corrections (DOC) employees and five employees of Corrections Health Services. A further 58 others are being monitored and are under quarantine.

Disgraced Hollywood producer Harvey Weinstein – who was transferred from Rikers to the Wende Correctional Facility – is among those who have been infected, although he is said to be exhibiting no symptoms and is in isolation.

According to one source on Riker's Island, infected inmates or those who require isolation due to being in close contact with an infected inmate, are being moved to what it termed "intake" – a secluded portion of the facility. If cases begin to climb significantly in the coming days or weeks, the insider noted, it would be likely the prisoners require transfer to nearby medical centers such as Elmhurst Hospital in Queens.

As of Monday afternoon, there were almost 370,000 confirmed cases of coronavirus globally and more than 16,000 deaths. In the United States alone, there are at least 41,167 infections, and the disease has killed 485 individuals. Domestically, New York has the lion's share of cases – almost 20,900, followed by neighboring New Jersey at 2,844 and Washington at just under 2,000.

The pandemic has caused mass fear and frustration among prison populations on a global scale. Earlier this month, Italy's prison systems moved into lockdown and thus halted visitors and external movements, igniting prison riots that left at least seven dead and paved the way for around 50 inmates to escape.

Colombia this past weekend was also rattled by prison unrest in its capital, Bogota. The riots were spurred by inmates' concern of coronavirus spreading, in which 23 were killed. And Iran, which has been engulfed by the advancing contagion, has claimed to have released tens of thousands at least temporarily, also endured fits of rebellion over the weekend at prisons in Aligodarz and Khorramabad as inmates clashed with ICRG guards in an upset over probable coronavirus exposure.

According to Darrin Porcher, a New York-based Criminal Justice Expert Witness and Consultant, the global outbreaks and prison turmoil are indeed prompting some local police departments in the United States to regress on arresting individuals for low-level offenses to reduce the number of detainees in jails.

"Prisons are being tasked with doubling cell and dormitory populations to create space for the purpose of isolation facilities for infected inmates," he explained. "Based on the overcrowding in prisons and jails, no contingency plan was in place for the isolation of infected inmates due to a health crisis. Isolation space is the terminal component in connection with a quarantine; therefore, this amenity was unavailable."

And from Porcher's lens, the unintended consequences associated with an event such as coronavirus could be wide-reaching.

"The inability to provide adequate isolation among inmates and staff will promote and exponential spread of the virus," he continued. "The psychological impact of the crisis will further cause negative outcomes that can manifest into riots and disruptions to the day-to-day operations of the facilities."

Inmates display a sign reading in Spanish "More than 30 dead" at La Modelo jail in Bogota, Colombia, Sunday, March 22, 2020. Violence broke out in the prison out of inmates' fears that authorities are not doing enough to prevent coronavirus inside overcrowded prisons. (AP Photo/Ivan Valencia)

Furthermore, the pandemic has prompted courts in large portions of the country to put a pause on trials and hearings until further notice, exacerbating the distress and anguish for many of the incarcerated.

And while there has been no significant jail outbreak of coronavirus yet many – experts, activists, inmates, employees, and their loved ones – worry it is only a matter of time of caseloads continue to soar across the United States.

"Even illnesses like Hepatitis C, which is now curable, are still ravaging those who are locked up because treatment is so costly," added Jessica Kelley, government affairs manager of Criminal Justice Policy at the R Street Institute, added. "Correctional facilities have delayed dealing with how to handle these types of health conditions, so now, in the face of COVID-19, all of the previously unaddressed questions are rising again with no clear path forward."