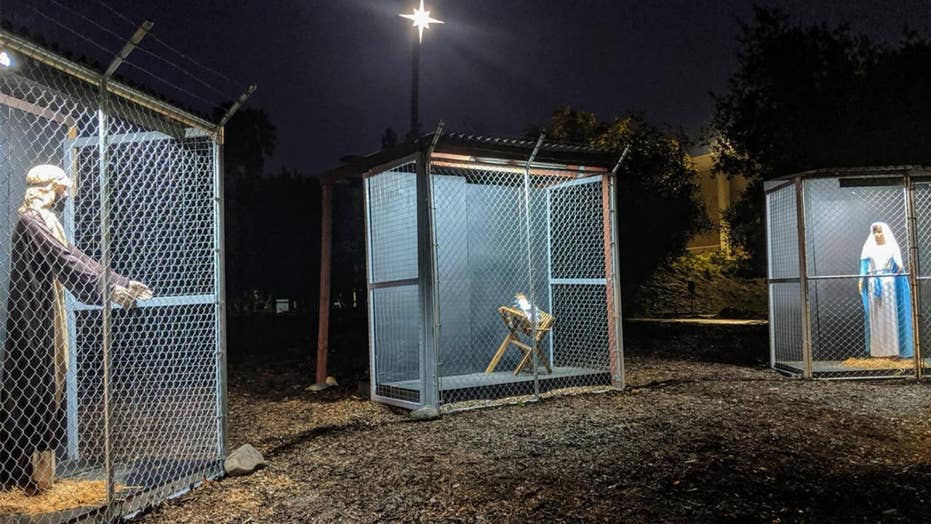 A California church is defending their nativity scene drawing attention to migrant detentions at the southern border.

A Southern California church is using the birth of Jesus to protest the now-defunct immigration policy that separated families who crossed the Mexico-U.S. border illegally.

Rev. Karen Clark Ristine posted a photo of the controversial display, saying she was "stirred to tears" by the Claremont United Methodist Church's "protest Nativity," which shows Jesus, Mary and Joseph in separate, barbed-wire cages. The post quickly went viral.

"What if this family sought refuge in our country today?" reads the church's statement posted next to the protest scene.

In the biblical story, as recounted in the gospel of Matthew, an angel appears to Joseph in Bethlehem telling him to take Mary and Jesus to Egypt because King Herod is trying to find their baby to kill him. The Holy Family stays in Egypt until Herod dies.

"Imagine Joseph and Mary separated at the border and Jesus no older than two taken from his mother and placed behind the fences of a Border Patrol detention center as more than 5,500 children have been the past three years," the caption reads. "In the Claremont United Methodist Church nativity scene this Christmas, the Holy Family takes the place of the thousands of nameless families separated at our borders."

The church later said in a statement, "Christianity is a tradition full of passion. It challenges and inspires us. As we the people of Claremont United Methodist Church seek to follow Christ, our faith causes us to pray, think, and reflect. We hear the passion in peoples’ responses to our nativity display. We hear them all, prayers and criticisms. This is Christianity in action. Our Nativity has evoked an important conversation, and we ask that you hear the passion – in the voices of others as well as your own. When passion turns to compassion, the Spirit inspires us all."

Starting July 2017, more than 5,400 migrant children were separated from their families at the border, according to the American Civil Liberties Union. President Trump ended the policy last year after a national outcry.

Ristine said she doesn't think it's a political statement. She calls it a "theological" one.

“A nativity is the theological equivalent to public art, and the role of public art has always been to offer awareness,” the reverend told The Washington Post. “Jesus taught us kindness and mercy and the radical welcome of all people.”

Jesus, Mary and Joseph were reunited in a separate scene inside the church. Ristine said the church has largely received support for the display but many online expressed their displeasure, calling it "disrespectful and sacrilegious."

It isn't the first "protest Nativity" to pop up across the nation. Last Christmas, churches in Indiana and Massachusetts protested in similar ways. Other liberal churches have used the Holy Family to protest against gun violence and to defend same-sex marriage in past years.