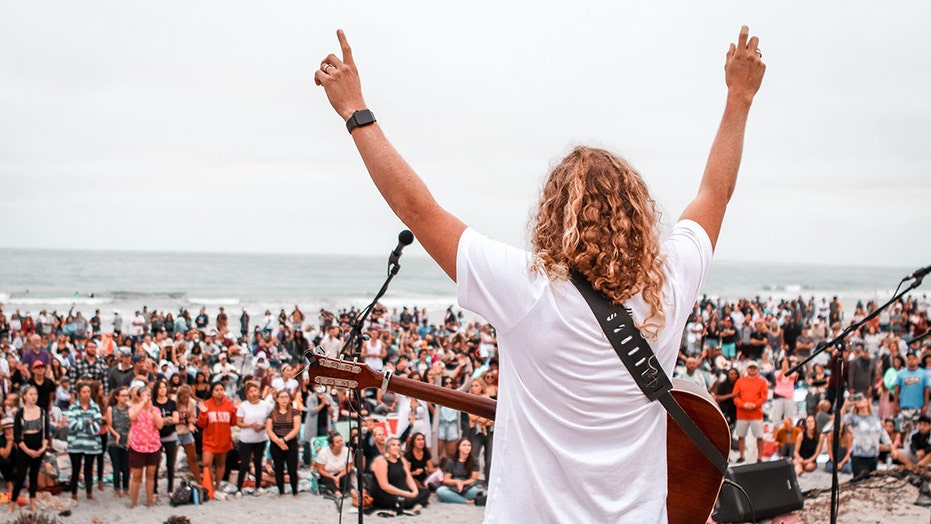 Hold the Line founder Sean Feucht speaks out on the fight for the right to worship in California.

On Sunday, more than 5,000 showed up on the beach in San Diego for a "Let Us Worship" event put on by worship leader Sean Feucht and his nonprofit, Hold the Line, where he baptized his own son, Ezra.

CALIFORNIA BEACH REVIVAL ATTENDED BY 1,000: ‘THE CHURCH HAS LEFT THE BUILDING’

"It's just the most raw, organic, gritty gospel," Feucht told Fox News. "It's been very eclectic, very diverse in terms of people praying and singing. People got healed, saved, and delivered."

Feucht has been traveling to cities across California leading “Let Us Worship” protests with local pastors and leaders after Newsom announced he was banning singing in churches at the beginning of July and has put further restrictions on indoor venues as the state has moved to No. 1 in terms of coronavirus cases.

INITIATIVE SEEKS TO INCREASE EVANGELICAL VOTE IN NOVEMBER: 'CHURCHES ALONE CAN MAKE ALL THE DIFFERENCE'

Hundreds showed up Saturday to the Fresno City Hall, where they worshipped and prayed, along with baptisms in the City Hall fountain.

"I believe in Jesus Christ and the freedom to worship and that's why we're here," Vanessa Kelly, a Reedley resident and mother of three, told the Fresno Bee. "We love Jesus and we want to worship and nothing's going to stop us from doing that."

On Friday in Bakersfield, Republican Mayor Karen Goh and the state's Senate Minority Leader Shannon Grove, also a Republican, opened up with prayer at a park in the center of the city.

The worship leader has protested through worship at San Francisco's Golden Gate Bridge and other locations.

"The venues have been really cool. Every night has been different but amazing," Feucht said.

Sean Feucht baptizes his son, Ezra, at the beach. (Courtesy of Whitney Witt)

But while Feucht has gathered with pastors and churches outside, many faith leaders are choosing to hold services inside in defiance of Newsom.

A network of California churches led by Pastor Che Ahn filed a lawsuit against Newsom's July 1 ban on singing in houses of worship to stop the spread of COVID-19.

Feucht and his organization, Hold the Line, are headed to Portland, August 8, to change the narrative after weeks of protests and riots.

"Where the world has only seen destruction and violence, we want to change the narrative and show that the church is rising up to change the storyline in our cities," Feucht explained. "We're not just going to watch our cities be burned and pillaged. We're coming to bring hope and peace to the violence."