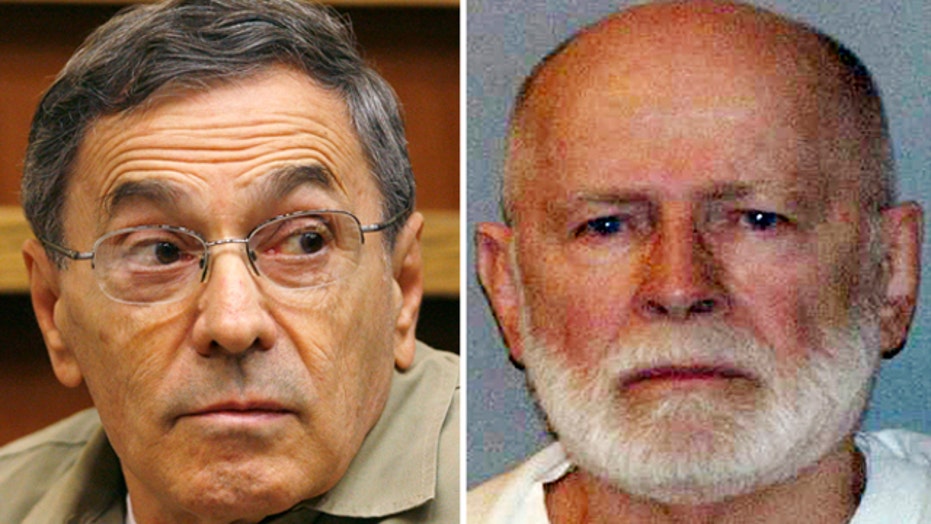 A look at dramatic new testimony

James "Whitey" Bulger's former partner in crime returned to the stand Tuesday for a fifth day of testimony, with the defense detailing his role as an informant for the FBI as it continued trying to discredit him as a witness.

One of the prosecution's star witnesses, Stephen "The Rifleman" Flemmi has been undergoing a relentless cross-examination by Bulger's lawyer in the reputed gangster's racketeering trial.

Flemmi, 79, says he and Bulger were secret FBI informants for 15 years while they ran the Winter Hill Gang, the city's murderous Irish mob. On Wednesday, he showed diagrams that he drew for the FBI detailing places where the rival Mafia had gathered.

Bulger insists that he was never an informant, and one thing that has really set him off in court is being called a rat.

Flemmi said he also didn't like being known as an informant when he was locked up for life after pleading guilty to 10 murders. He said he especially hated being called "a rat."

The defense got Flemmi to admit that he's lied in court previously. Flemmi said that if he hadn't, it would've exposed a corrupt relationship with the FBI and that wouldn't have helped his defense.
But he insisted Wednesday, "I'm telling the truth now."

Hank Brennan, a defense attorney, suggested Flemmi received years of special treatment from law enforcement, including being dropped by former federal prosecutor Jeremiah O'Sullivan from an indictment in a horse-race-fixing scheme that spanned five states, The Wall Street Journal reported.

O'Sullivan, the former top prosecutor for the the New England Organized Crime Strike Force, testified in 2002 to a congressional committee examining the FBI's use of criminals as informants that Bulger and Flemmi weren't implicated in the race-fixing case because they were minor players, according to a February 2004 congressional report on the hearings. Mr. O'Sullivan had made the decision to leave them out of the indictment, The Journal’s report said.

But the report concluded that O'Sullivan's own memorandum indicated that Bulger and Flemmi played a key role in every part of the criminal enterprise.

O'Sullivan had also testified to Congress that he had been berated by the FBI for targeting its informants for investigations. "If you go against the [FBI]…they will wage war on you," he said, according to the report.

O'Sullivan died in 2009. A spokeswoman for the U.S. Attorney's Office declined to comment Wednesday to the newspaper, as did an FBI spokesman.

On Tuesday, Flemmi testified that Bulger strangled two young women and added a new accusation — that Bulger was a pedophile.

The claim came as Bulger's lawyer questioned Flemmi about his own admission that he had engaged in oral sex with his girlfriend's teenage daughter, Deborah Hussey, in the 1970s. Flemmi lobbed a similar accusation back at Bulger.

Earlier Tuesday, Flemmi had said Bulger had a 16-year-old girlfriend he took to Mexico on vacation with him.

Bulger's lawyer, Hank Brennan, pressed Flemmi on his assertion that Bulger strangled Hussey in 1985 because she was using drugs, getting arrested and dropping their names when she got in trouble.

Brennan suggested that Flemmi, not Bulger, killed Hussey after she told her mother he molested her.

Brennan also pointed out inconsistencies in Flemmi's testimony about both Hussey's killing and the murder of Debra Davis, another Flemmi girlfriend. Both Hussey and Davis were 26 when they were killed.
Bulger has strongly denied killing the women.

Flemmi testified that Bulger strangled both women with his hands, but Brennan pointed out that he had testified during earlier civil and criminal trials that Bulger used a rope.

Flemmi insisted that the inconsistencies were due to "inadvertent mistakes" he made during his testimony and that he was telling the truth about Bulger killing the two women.

Bulger, 83, is accused of participating in 19 killings during the 1970s and '80s while leading the notorious Winter Hill Gang. He fled Boston in 1994 and was one of the nation's most-wanted fugitives until he was captured in California two years ago.