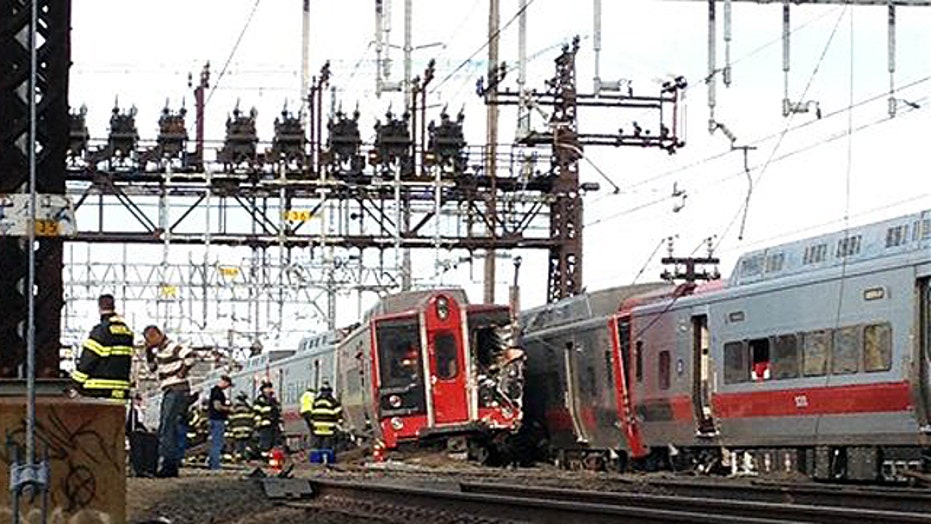 FAIRFIELD, Conn. – The commuter train derailment and collision that left dozens injured outside New York City was not the result of foul play, officials said Saturday, but a fractured section of rail is being studied to determine if it is connected to the accident.

National Transportation Safety Board member Earl Weener said Saturday the broken rail is of substantial interest to investigators and a portion of the track will be sent to a lab for analysis.

Weener said it's not clear if the accident caused the fracture or if the rail was broken before the crash. He said he won't speculate on the cause of the derailment and emphasized the investigation was in its early stages.

Seventy-two people were sent to the hospital Friday evening after a Metro-North train heading east from New York City derailed and was hit by a train heading west from New Haven. Most have been discharged.

Officials earlier described devastating damage and said it was fortunate no one was killed.

"All of the injured people described the really harrowing experience of having the train jolt to a stop, the dust, darkness, other kinds of factors that made it particularly frightening," said U.S. Sen. Richard Blumenthal, who visited several patients in the hospital.

Blumenthal said a Metro-North conductor helped passengers despite her own injuries.

"Her story is really one of great strength and courage helping other passengers off the train in spite of her own very severe pain," Blumenthal said. "She eventually had to be helped off herself."

The crash damaged the tracks and threatened to snarl travel in the Northeast Corridor. The crash also caused Amtrak to suspend service between New York and Boston.

"The damage is absolutely staggering," Blumenthal said, describing the shattered interior of cars and tons of metal tossed around. "I feel that we are fortunate that even more injuries were not the result of this very tragic and unfortunate accident."

"We want our customers to know that while you travel on Metro-North, you can remain confident that your safety, and the safety of our employees, is always the first priority in everything we do," said Howard Permut, President of MTA Metro-North Railroad.

NTSB investigators arrived Saturday and are expected to be on site for seven to 10 days. They will look at the brakes and performance of the trains, the condition of the tracks, crew performance and train signal information, among other things.

When the NTSB has concluded the on-site phase of its investigation, Metro-North will begin to remove the damaged rail cars and remaining debris. The process requires specialized, heavy equipment that will be in place by Sunday, officials said. Only after the damaged train cars have been removed can Metro-North begin the work of rebuilding the damaged tracks and overhead wires.

"It is a significant undertaking that could take days to complete," MTA said in a statement.

The NTSB has allowed Metro-North to begin removing some of the track and wire from the scene.

Gov. Dannel P. Malloy said commuters should make plans for alternative travel through the area and urged them to consult the state Department of Transportation website for information.

Weener said data recorders on board are expected to provide the speed of the trains at the time of the crash and other information.

"Our mission is to understand not just what happened but why it happened and determine ways of preventing it from happening again," Weener said.

About 700 people were on board the Metro-North trains when one heading east from New York City's Grand Central Terminal to New Haven derailed at about 6:10 p.m. just outside Bridgeport, transit and Bridgeport officials said. Passengers described a chaotic, terrifying scene of crunching metal and flying bodies.

A spokeswoman for St. Vincent Medical Center said late Saturday that 46 people from the crash were treated there, with six of them admitted. All were in stable condition, she said.

A Bridgeport Hospital spokesman said 26 people from the crash were treated there, with three of them admitted. One was in critical condition and two were in stable condition, he said. The other 23 were released.

Bridgeport Mayor Bill Finch said the disruption caused by the crash could cost the region's economy millions of dollars.

Passenger Frank Bilotti said he was returning from a business trip in Boston on the westbound train when it crashed.

"Everybody was pretty much tossed around," said Bilotti, 53, of Westport, who wasn't injured other than a sore neck.

Firefighters used ladders to help people evacuate after the derailed cars dug into the banks of the tracks, Bilotti said.

At Grand Central, Frances Liu and her family were trying to get to New Haven, where Liu is graduating from Yale. A train could get them only as far north as Stamford.

"And then we'll rent a car and drive," she said.

Liu's parents had flown in from China for her graduation and were touring the country around her commencement. But the car-rental plan could face a snag -- Liu never got a driver's license, although her parents had their Chinese licenses.

"My mom can drive. So I hope it'll be OK!" Liu said as she rushed off to decide on a train.

The last significant train collision involving Metro-North occurred in 1988 when a train engineer was killed in Mount Vernon, N.Y., when one train empty of passengers rear-ended another, railroad officials said.