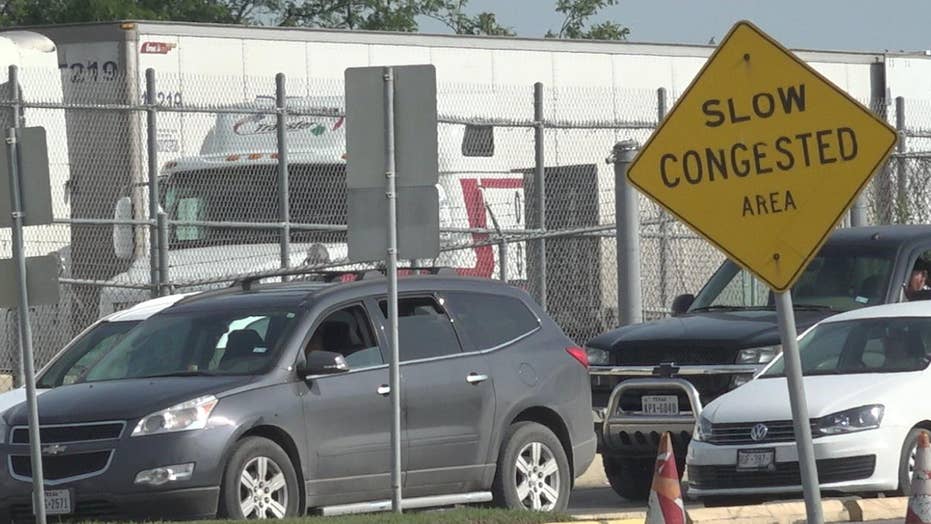 BROWNSVILLE, Texas -- – Jorge Rocha, a trucker who delivers auto and aeronautics parts from Mexico to the U.S., said it used to take him half an hour to cross the border. These days, it takes him three to five hours. He's now cutting the number of trips he makes because of the excruciatingly long wait times.

“I used to make two or three crosses. Now, it’s one to two per day. The clients are waiting longer for their products,” said Rocha.

Customs and Border Protection reassigned officers from ports of entry along the Southwest border to help Border Patrol with processing the growing flow of migrants from Central America. Up to 750 officers were transferred and have now been tasked with hospital watch and transporting migrants.

The reassignment has left fewer CBP officers to process trade and travel at ports of entry. On Friday afternoon, for instance, only two lanes were open on Gateway International Bridge, when usually there are five. The average wait time was more than two hours.

Trevino said the slowdown could hurt trade with Mexico, Texas’ largest trading partner. In 2017, trade between the two countries reached more than $187 billion.

“You’ve got plants throughout the Midwest, throughout the country that are waiting for these particular parts to continue manufacturing their automobiles. You’ve got agricultural, products, food stuff that has to be preserved,” said Trevino.

The long wait times for commercial trucks crossing international bridges on the U.S.-Mexico border could potentially cause delays down the supply chain, say Cameron County leaders. It has affected deliveries of auto parts and agricultural products throughout the country.

“This impact will hit all the 50 states, and if we’re not careful, it’s going to start already having that impact,” said Eddie Trevino Jr., Cameron County Judge. The county manages three of the four international bridges at Brownville’s ports of entry.

TRUMP GIVES MEXICO A 'ONE YEAR WARNING' TO STOP DRUGS, MIGRANTS OR HE WILL TAX CARS AND CLOSE THE BORDER

CBP said other areas strained by the growing number of migrants illegally crossing the border needed help. The agency said last week it was on track to arrest more than 100,000 border crossers in March, and that has overwhelmed facilities and personnel.

“What we are witnessing is a fundamental national security and humanitarian crisis. Politicians in Washington may disagree on a solution…but we must all agree that what we are facing is a true crisis. It is not manufactured, it is real,” Department of Homeland Security Secretary Kirstjen Nielsen, who delivered remarks during a visit to Yuma, Ariz., said on Thursday.

President Trump recently walked back his comments to close the southern border, giving Mexico one year to stop the flow of drugs. But some are concerned about the wait times.

Up to 750 Customs and Border Protection officers have been re-assigned from ports of entry to help process the influx of migrants from Central America.  (Fox News)

Trevino said that fewer agents at ports of entry could leave them vulnerable to drug traffickers. CBP has often called the Rio Grande Valley the busiest sector in the country and accounts for “more than 40% of the illegal border crossings arrests, more than 43% of the seized marijuana in the southwest border for the fiscal year to date, and is second of the seized cocaine."

“It’s a well-known fact that…the ports of entry is where the largest amount of contraband drugs cross. So, now you’ve got fewer federal agents doing the inspection work,” said Trevino.

Businesses in downtown Brownsville, which get the majority of its customers from Mexico, have already seen changes.

Chapa said he and other employees have begun delivering jewelry to their clients in Mexico to avoid having them wait three to four hours on the bridge.

He and others hope common sense will prevail to bring the bridges back to normal.