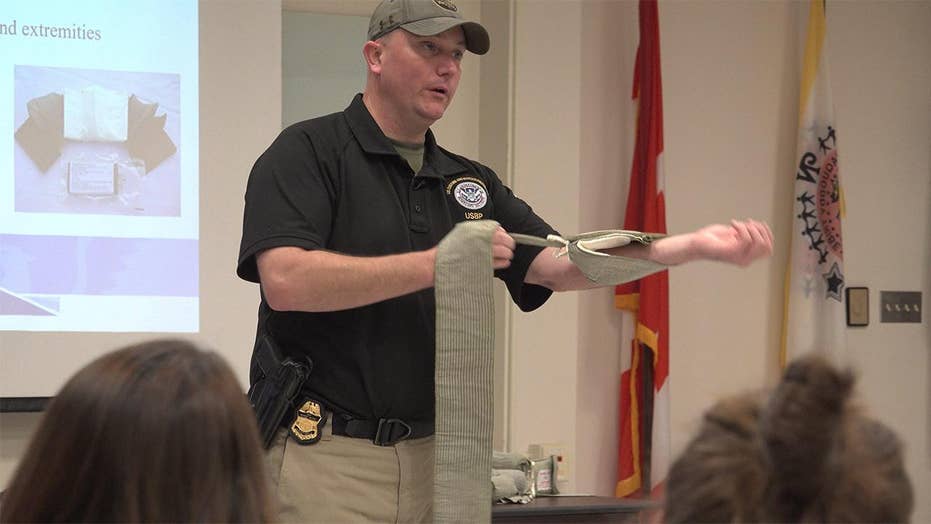 The agents are going into the classroom to teach teachers how to treat massive bleeding, with schools being some of the most vulnerable targets.

CALAIS, Maine – Following a recent string of deadly mass shootings across the country, Border Patrol agents are coming into schools to share what they know with educators. The goal: preparedness, should the unthinkable occur.

Border Patrol agents stationed at the northern border, at the northeasternmost point in the continental U.S., are going into the classrooms to teach instructors how to treat massive bleeding. After all, schools are widely viewed as among the most vulnerable targets.

"You want to make sure the scene is safe before you go in there," a U.S. Border Patrol supervisory agent, Kevin Kellenberger, told a room full of school faculty at Washington Community College in Calais, Maine.

So far, Kellenberger and his team have trained more than 100 teachers in the proper use of IFAKs, or individual first aid kits, found in combat zones and packed with basic medical supplies to stop bleeding until help arrives. He is one of several agents who are also certified EMTs, most frequently providing medical treatment to people who cross the border illegally and suffer from dehydration and exhaustion after long journeys on foot.

Some 3,000 miles south in El Paso, Texas, near the southern border, roughly 130 Customs and Border Protection (CBP) agents rushed to the site of a deadly August shooting at a Walmart. Donna Sifford, a director at CBP who was off-duty when the shooting happened, sped to the scene to help and was later credited with saving a man's life – using this training.

While the situation is calmer along the U.S.-Canada border, agents want the community to be ready for anything. In remote border communities like Calais, Border Patrol agents are often the embodiment of the nearest available law enforcement agency. Indeed, it can take hours for police and EMTs to get there to assist in a mass casualty incident.

The IFAK is equipped with medical equipment capable of treating massive bleeding and maintaining an airway in an emergency situation. (Rob DiRienzo / Fox News)

"Our kids and our families work and go to school here," Kellenberger said. "We saw that there was a vacuum that could be filled in terms of some training that could potentially help."

In the hands of someone who knows how to use it, the IFAK can save lives and lessen the burden on first responders, Kellenberger said. The training for schools is a pilot program specific to parts of Maine, now in its second year. Meanwhile, other sectors and law enforcement agencies are beginning to offer similar training to schools and other institutions across the country.

John Charters, the master carpenter at Washington County Community College, said it's training he hopes he'll never have to use, but he's glad he has it.

"You see on the news with all the other schools where they always say, well never happens here," Charters said. "Well it could happen, and this is good to know."

After someone is shot, when every drop of blood counts, Kellenberger said the goal is to get survivors to act fast.

“I want them to feel comfortable with doing something," Kellenberger said. "Because in these situations, the quick response of doing something will always be a benefit as opposed to feeling like they don’t have the knowledge and they aren’t able to help.”