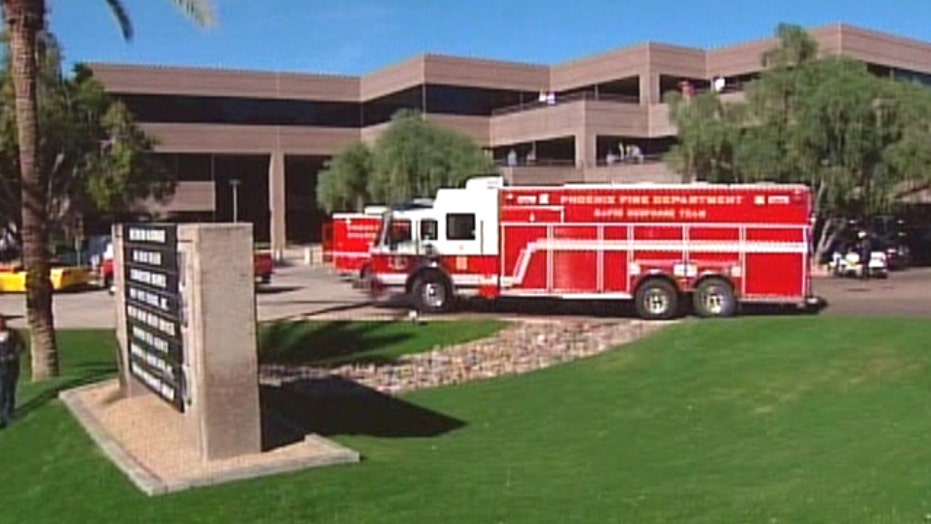 The body of a 70-year-old suspected gunman, who allegedly killed one person in a Phoenix office complex Wednesday and wounded two others, was found in the bushes near his abandoned car, according to the Associated Press.

The body appeared to have a self-inflicted gunshot wound, Fox affiliate KSAZ reported.

One man -- identified by police as 48-year-old Steve Singer -- died hours after the shooting. Lawyer Mark Hummels, who was critically wounded in the shooting, is not expected to survive, according to his law firm. A 32-year-old woman suffered non-life threatening injuries.

"We believe the two men were the targets. It was not a random shooting," said Sgt. Tommy Thompson, a Phoenix police spokesman.

Thompson said the gunman arrived at the office building about 10:30 a.m. and got into a dispute with someone, a conflict that escalated to the point where the suspect drew a gun and shot three people.

Police believe Harmon acted alone and fled the scene in a car. Police said he had at least one gun and was considered "armed and dangerous."

Harmon also allegedly shot at someone who tried to follow him after the shooting in an attempt to get his license plate number, according to authorities.

Police didn't immediately release the names of the wounded. But a Phoenix law firm, Osborn Maledon, said one of its lawyers, Mark Hummels, was among the wounded. The firm said Hummels "was representing a client in a mediation" when he was shot.

According to court documents, Harmon was scheduled to go to a law office in the same building where the shooting took place for a settlement conference in a lawsuit he filed last April against Scottsdale-based Fusion Contact Centers LLC, where Singer was the CEO.

The company had hired him to refurbish office cubicles at two call centers in California, but a contract dispute arose.

Fusion said Harmon was paid nearly $30,000 under the $47,000 contract. But the company asked him to repay much of the money when it discovered that the cubicles could not be refurbished, according to the documents.

Harmon argued Fusion hung him out to dry by telling him to remove and store 206 "worthless" work stations after the mix-up was discovered. Harmon said Fusion then told him that the company decided to use a competitor.

Harmon's lawsuit had sought payment for the remainder of the contract, $20,000 in damages and reimbursement for storage fees and legal costs.

Hummels was representing Fusion in the lawsuit.

As police searched for the shooter, SWAT teams and two armored vehicles surrounded a home about 7 miles north of the shooting scene. Police served a search warrant to enter the house, which county property records show was sold by Harmon to his son last year for $26,000.

For a time, officers used a megaphone to ask Harmon to surrender, believing he might be inside the home.

Lois Ellen, who has lived across the street from the Harmon home for about eight years, said she was startled to see all the police cars in the neighborhood.

She said she never met Arthur Harmon but had seen him walking a dog before.

Ellen said he wasn't very neighborly and the people in the Harmon home "keep to themselves."

The gunfire at the office complex prompted terrified workers to lock the doors to their offices and hide far from the windows. SWAT officers searched the building.

"Everyone was just scared, honestly, just scared," said Navika Sood, assistant director of nursing at First at Home Health Services who along with her co-workers locked the entrances to their office.

Sood said police evacuated the office about 30 minutes after she first heard the popping noises.

Vanessa Brogan, who works in sales support at an insurance business in the three-story complex, said she heard a loud bang that she thought at first was from somebody working in or near the building.

She said others at the business thought they heard multiple loud noises. She said people locked themselves in offices until authorities evacuated the complex that houses insurance, medical and law offices.

Becky Neher, who works for a title company in the building, said the two gunshots she heard sounded like two pieces of metal banging against each other.

Watching from her second-story office, she saw people leaving the building.

"Someone yelled, `We have a shooter,"' she said. She saw two victims lying on the ground outside the back side of the building. She said health care workers who have offices in the complex came out to help.

Don Jaksa, a software consultant who works in the building, said he was listening to the radio when he suddenly heard "two pops." He said he didn't think they were gunshots.

"My co-worker goes to the range all the time," he said. "He identified it as gunfire."

The shooting took place on the same day that hearings on legislation to address gun violence were convened in Washington, with former Rep. Gabrielle Giffords testifying for stricter gun controls.

A gunman shot Giffords in the head during a shooting rampage in Tucson in January 2011.