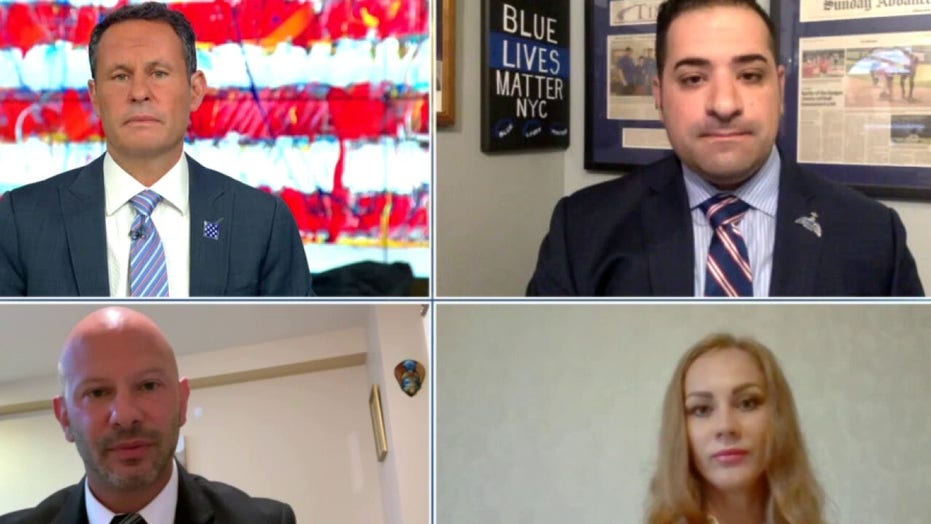 Blue Lives Matter NYC and Standing Up for NYC argue their First Amendment rights are being violated.

The founders of New York City-based pro-police groups suing officials for their right to paint their own mural said Wednesday they hope to be allowed to commemorate their heroes and stressed that it’s only fair that they are allowed to express their First Amendment right by doing so.

“People came to Ellis Island because this was the hub. This is where the American dream began. This is where, no matter what you look like or how much money was in your pocket, you had the opportunity of starting a new life, whether it was having to work for one or having five jobs,” Joe Imperatrice, founder of Blue Lives Matter NYC, told Fox News. “You had the opportunity, no matter who you were, to advance yourself. And these politicians have forgotten that. They're put in certain groups – and it seems like radical groups – on a pedestal.”

Imperatrice expressed similar feelings earlier on Thursday during a segment on Fox & Friends, where he and the co-founders Standing Up for NYC, Tatianna Davidoff, and Jason Cohen, outlined their recent lawsuit filed against New York City Mayor Bill de Blasio and Department of Transportation Commissioner Polly Trottenberg.

Spokespersons for de Blasio and Trottenberg declined to comment on the pending litigation.

The lawsuit accuses the officials of violating their First Amendment right by denying their request to paint a mural in lower Manhattan to honor the more than 30 police officers who have been fatally shot in the line of duty this year.

But according to the suit, the city was allowed to bypass the formal application process and obtain a Department of Transportation “de factor permits” for each of the eight murals.

De Blasio and Trottenberg “opened a forum for political speech in front of Trump Tower and seven other city locations by approving the political message ‘Black Lives Matter’ to [be] painted on city streets otherwise strictly limited to traffic-related messages,” the lawsuit states. “Once Defendants open a forum for one, you must open that forum for all … De Blasio and Trottenberg have allowed city property to be used by private speakers according to rules that the Defendants prescribe. Under the First Amendment, however, those rules cannot discriminate on the basis of viewpoint. But, that is exactly what Defendants have done here.”

During a City Hall press conference at the end of July, the Democratic mayor was asked about his reasoning behind allowing Black Lives Matter murals, but not ones with different messages.

“I think it’s a message about human respect and the value of human beings,” he said at the time, “and addressing the fact that one group amongst us, in particular, has been devalued for centuries and that can’t go on.”

On Wednesday morning, Cohen told Fox News’ Brian Kilmeade they hope their mural will “honor the memory of those officers that were fallen, that gave their lives as the ultimate sacrifice. We want to boost morale for our NYPD officers to a city that now scorns and also defunds them.”

Imperatrice later told Fox News by phone that amid the anti-police sentiment officers are experiencing in the city, police families who lost someone in the line of duty have been “put to the back burner.”

“The worst part is when all this is going on, the family of loved ones who were lost in the line of duty are sitting at home saying, ‘This is what my loved ones sacrifice their life for,’” he said. “We were founded to remember the heroes. And if we can go out there and go through the correct process to get approval and have a fair shake of putting a mural down to honor those fallen heroes in such a turbulent time against cops, that's going to be a positive statement from the nation.”