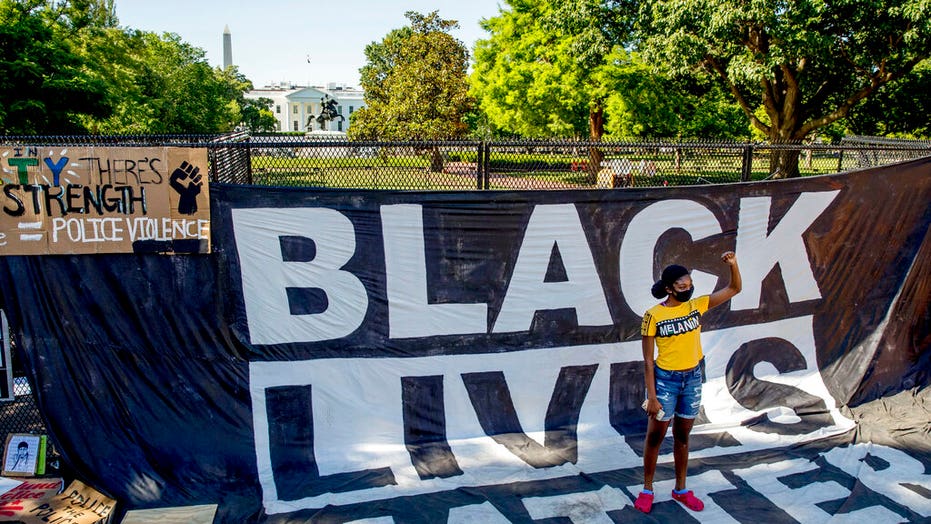 The Black Lives Matter organization's website appears to have removed a page that included disrupting “the Western-prescribed nuclear family structure” among its core principles.

Users who tried to access the now-deleted “What We Believe” page on Monday were prompted with: “Page Not Found … Sorry, but the page you were trying to view does not exist.”

The White House is visible behind a woman who holds her fist up as she poses for a photograph with a large banner that reads Black Lives Matter hanging on a security fence in Washington, after days of protests over the death of George Floyd.

The page, still viewable on the “Wayback Machine,” listed the group’s radical objectives for transforming society.

“We disrupt the Western-prescribed nuclear family structure requirement by supporting each other as extended families and ‘villages’ that collectively care for one another, especially our children, to the degree that mothers, parents, and children are comfortable,” one of those objectives reads.

The deleted page was first reported by The Washington Examiner.

The spotlight on some of BLM’s more controversial positions comes during a decline in support for the group. A Pew Research poll released last week showed that just over half of American adults, at 55%, support the group, down from a high of 67% in June, when the nation was reeling from the death of George Floyd, a Black man, in the custody of Minneapolis police officers.

Republicans have also pounced on the founders’ Marxist foundations. In a 2015 interview, co-founder Patrisse Cullors identifies herself and her fellow BLM co-founders as “trained Marxists.”

“I actually do think we have an ideological frame,” Cullors said. “We are trained Marxists.”

BLM was founded in 2013 in response to the acquittal of George Zimmerman, the man who shot and killed 17-year-old Trayvon Martin.  An “About” section on its website says it is a global organization “whose mission is to eradicate white supremacy and build local power to intervene in violence inflicted on Black communities by the state and vigilantes.”