Black Lives Matter helps nobody except itself: Tyrus

The Black Lives Matter movement started a massive wave of Americans uniting to call for defunding the police and eradicating white supremacy to make positive changes for Black Americans. But experts reflecting on the movement’s scorecard in 2022 say Black America hasn’t benefited.

"I would argue that, on balance, these communities are worse off because by [BLM] overemphasizing the role of police, they've changed police behavior for the worse," the Manhattan Institute’s Jason Riley told Fox News Digital in a phone interview. "In other words, police do become more cautious. They're less likely to get out of their cars and engage with people in the community. And to the extent that police are less proactive, the criminals have the run of the place."

Riley noted that "police brutality still exists, bad cops exist," and he has no "problem with raising awareness about police misconduct." But he argued that BLM is "over-focused" on police and does not take into account that "97, 98% [of Black homicides] do not involve police at all."

Dr. Carol Swain, a retired professor of political science and law at Vanderbilt University, told Fox News Digital that "an intelligent observer would be hard-pressed to identify any area in American society where BLM’s activism has benefited the Black community."

"What BLM has done is pervert the criminal justice system by engaging in activities that have resulted in a growing trend of trials by media," Swain said. "BLM has intimidated juries and judges. Its leaders have no interest in due process or the presumption of innocence."

Black Lives Matter began with the social media hashtag #BlackLivesMatter and was officially founded in 2013 after the acquittal of George Zimmerman in the fatal shooting case of 17-year-old ​​Trayvon Martin. Chants of "Black Lives Matter" later rang out at protests following the police-involved killing of Michael Brown in Missouri in 2014 and continued to into the next year after the death of Freddie Gray in Baltimore.

It ultimately grew to a vast movement by the summer of 2020 that swept the highest echelons of America, from corporate leaders to Hollywood icons to powerful sports figures pledging support.

Defunding the police is a cornerstone of BLM’s mission and remains on its list of seven demands on the group’s website.

"We know that police don’t keep us safe — and as long as we continue to pump money into our corrupt criminal justice system at the expense of housing, health and education investments — we will never be truly safe," BLM posted in July 2020.

But as the calls to defund rang out, violent crimes in the Black community skyrocketed. Murders in the 2010s first broke the 7,000 mark in 2015 after the highly-publicized deaths of Gray that same year and Brown in 2014, jumping by nearly a thousand in one year.

In 2020, the year George Floyd was killed during an interaction with Minneapolis police, Black murders jumped by a staggering 32% compared to 2019, according to FBI data. Overall, Black murders increased by 43% that year compared to the prior 10-year average. CDC data published Tuesday additionally showed that in 2020, Black Americans were disproportionally affected by gun-related homicides, increasing by 39.5% that year compared to 2019. Gun-related homicides rose by 35% overall that year, according to the CDC.

"Certainly, the protests and riots mid-2020 after the death of George Floyd followed a pattern of spiking violence that we've seen following past viral police incidents, such as the deaths of Michael Brown and Freddie Gray. This pattern has been termed the ‘Ferguson Effect' — police pull back while violent crime spikes precipitously," Hannah Meyers, director of the policing and public safety initiative at the Manhattan Institute, previously told Fox News Digital.

The Ferguson Effect unfolded again in 2020, according to experts, but polling showed the Black community wasn’t on board with the calls to defund.

A Gallup poll from August 2020 found 81% of Black Americans wanted "police to spend [the] same amount of or more time in their area," compared to 19% reporting police should spend less time in their neighborhood.

Riley said that the polling shows "that these activists are not in step with the people who actually live in these violent communities."

Swain added that "BLM focuses on scattered cases of police abuse," but ignores "the horrendous Black-on-Black crimes that take place daily in cities around the nation."

"BLM does not want young Black men and women to know the importance of individual choice in determining how an encounter with police will end. Instead of modeling lawful behavior, BLM and progressive politicians in Congress seem to hold the regressive belief that Black people are always right even when they are clearly wrong," Swain said.

"Many progressives — White and Black — hold a dangerous belief that black people are justified in challenging and disobeying lawful police orders. This encourages a dangerous double standard that erodes the rule of law and contributes to more criminal behavior."

Black Lives Matter activists, however, say they built a movement that positively changed how America talks about race at a national level down to the community level.

"The conversation around race didn’t exist in a vast capacity until we saw the BLM movement, this surge," T. Sheri Amour Dickerson, executive director and core organizer of BLM Oklahoma City, told NBC in 2020. "Now difficult conversations, honest conversations, and even some discourse, have become part of the daily discussion here in Oklahoma, and I think that goes nationwide in many different factions. It’s also become more intergenerational."

Hawk Newsome, the co-founder of Black Lives Matter of Greater New York, argued on Fox News’ "America’s Newsroom" last month that the defund movement did not hurt the Black community when confronted with FBI data showing the increase in Black murders. He defined the defund movement as "taking money from the police and putting it in community centers, job opportunities and after-school programs … So it wasn't like ‘just get rid of this money for the police.’ It was invest in the community." 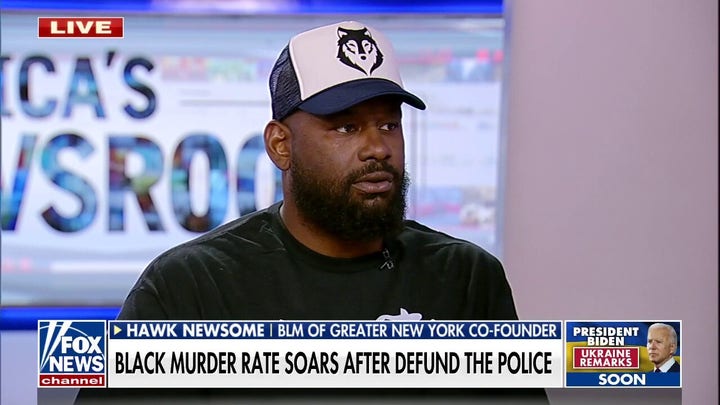 "Great things have come out of Black Lives Matter. We've had more black corporate hires than in the history of this country. We've passed progressive laws. The cops that killed George Floyd wouldn't have been prosecuted. So many of these cops, so many measures for accountability. It came as a result of that," Newsome said while denouncing controversies surrounding the co-founders of BLM.

The Black Lives Matter Global Network Foundation's press team and Black Lives Matter of Greater New York did not respond to Fox News Digital requests for comment regarding experts saying the BLM movement has not benefited the Black community.

Swain said that the Black community will see change "when enough of its leaders push for a return to the values and principles of older generations who appreciated the sanctity of human life and took pride in their communities and self-betterment through individual effort and ingenuity."

"We need fewer chapters of BLM and more exemplary organizations like the Woodson Center, which has an outstanding record of changing lives and giving hope to the least among us," Swain said.