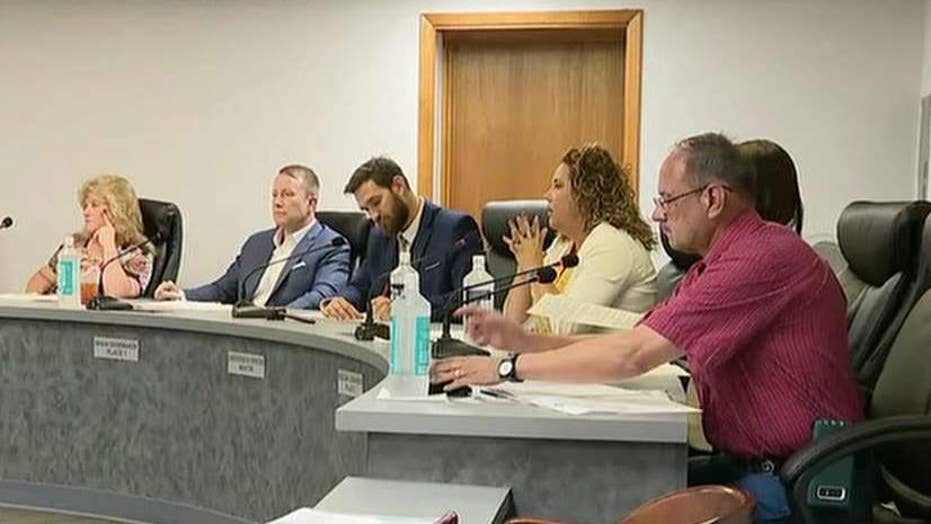 The Mineral Wells City Council votes down an anti-abortion ordinance for the city.

A group of more than 30 clergy members and religious activists in Birmingham, Ala., have signed a letter promising sanctuary to immigrants facing mass deportations in their state, according to a Tuesday report.

A federal prosecutor described the raid as "the largest single-state immigration enforcement operation in our nation's history."

A man standing in line to receive communion during a Spanish mass at Sacred Heart Catholic Church in Canton, Miss. (AP)

“The raid over in Mississippi last week was a pivotal moment for us to begin talking about what we would do here if faced with similar things,” Ecknes-Tucker said. “We talked about helping with kids, giving them a safe place to be.”

Declaring churches a sanctuary, Ecknes-Tucker said, will protect immigrants from deportation and allow them time to recuperate.

Ecknes-Tucker acknowledged the likelihood of legal challenges but said he and his congregation “are willing to make that stand.”

The letter, which was issued Tuesday, affirmed that “ethical and theological commitments require us to take a stand against policies and language that dehumanize our immigrant siblings.”

Theologian Jonathan Morris, Pastor Robert Jeffress and Muslim scholar Qanta Ahmed weigh in on the role of religion in the immigration debate.

It then admonished “racist, xenophobic, and violent rhetoric from our national leaders” used to “vilify both documented and undocumented immigrants.”

KAMALA HARRIS: DHS RAID ON ILLEGAL IMMIGRANTS WAS A ‘CAMPAIGN OF TERROR’ BY TRUMP ADMINISTRATION

Though the signatories “love and support” police and law enforcement who want to better their community, they decried the supposed weaponization of law enforcement policies “as part of an agenda to promote ethnic nationalism.”

The letter ends with a comparison of “saints and holy ancestors” who have fought on behalf of marginalized groups.