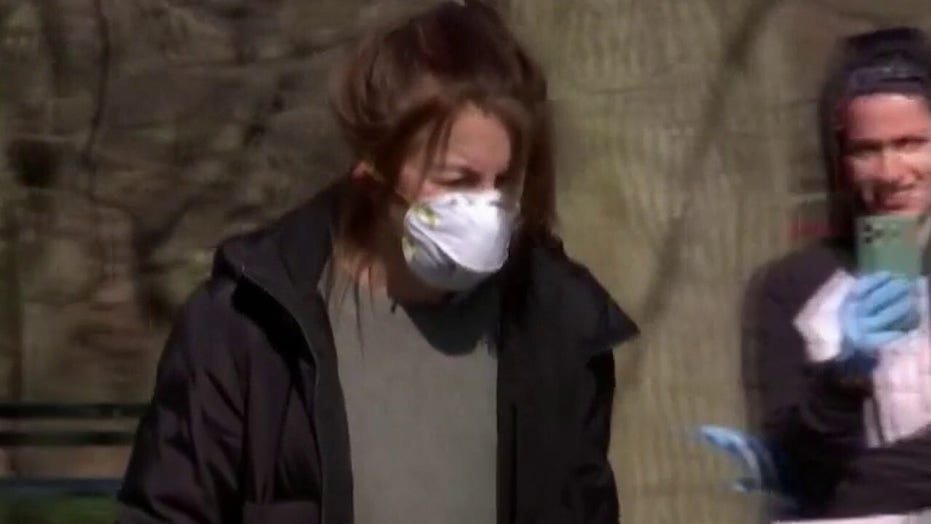 Aid groups work to get masks, gowns to health-care workers amid COVID-19 pandemic

The United States may have one of the most advanced medical systems on the globe, but the coronavirus has sparked a dire need for protective equipment -- and some surprising groups of Americans are now pitching in.

"My own hospital was looking into buying us garbage bags to wear in place of disposable gowns," one front-line hospital doctor taking care of coronavirus patients told Fox News. "We are probably five days away from running out of [gowns], and if my family had not found and mailed to me disposable gowns, I might not have any when I am on work next week. My own mother is sewing me reusable cloth gowns."

Unfortunately, many doctors and nurses dealing with the crisis have seen a similar need.

The lack of preparation has spurred various volunteer efforts to supply the medical community with what it so desperately needs, and Fox News has been reporting on several: AfyaFoundation.org, Mask-Match.com and MasksForDocs.com.

Medical workers posing with masks provided to them via MasksForDocs. (Masks For Docs Foundation)

MasksForDocs has worked around the globe, but lately, the pressing need has been on the homefront.

"If you wait for the government, the [non-governmental organizations] and the international corporations, people are going to die," said Chad Loder, a California tech executive who founded MasksForDocs. The group has been scouring for masks, protective shields, gowns and other items from anywhere they're available -- from nail salons, hairdressers and tattoo parlors to people with extras in the garage. Loder said the group has established chapters across the country, and the effort can start with a single volunteer.

"If you have one person in one city, that is how you get started," Loder added.

MasksForDocs has been establishing a corps of volunteers across the country, and in some cases has relied on an unusual way to distribute the desperately needed items: bikers. Loder said about 60 motorcyclists in New York, Chicago and Los Angeles have been delivering Personal Protective Equipment (PPE) directly from donors to the doctors.

"We started using bikers because people had stuff to donate, but they are trapped in their house. They said, 'We have masks, but how do we get them to you?' The need was so dire that we didn't have time to get a box or call FedEx, so we used a group of motorcyclists," Loder explained.

Bikers are among the donors helping to get PPE delivered. (Masks For Docs Foundation)

"Motorcycles are great because they are fast and where there is a lockdown, they can go around the parking lot gate at a hospital and drop off a box of supplies with an ER doctor right at the side door."

Los Angeles has recognized the help from the city's bikers.

"We've had heroic people driving across Los Angeles County with motorcycles and pick-up trucks who are going to folks who are donating one, two, 10, 20 of these masks to make sure that that night, a nurse or a doctor or a medical technician will have masks where they are working," Mayor Eric Garcetti said in his address to the city on April 1 when he thanked the volunteers.

"MasksForDocs, If you go to #MasksForDocs, people are taking one or two of these out of their earthquake kit. Or construction workers who don't need the hundred that they have are saying, 'I've got them,' and a motorcyclist is going across town and picking them up, keeping them secure and dropping them off where a nurse or a doctor said, 'It looks like we are all out tonight.'"

"As far as the matter of protective equipment for front-line health care workers: it's clear crisis," Dr. Rick Loftus said. Loftus has been the associate program director of the internal medicine residency at Eisenhower Health in Rancho Mirage, Calif. He also is a professor of medicine, an AIDS researcher and an expert in virology and immunology who ran a biohazard level III laboratory. "The virus is something like radiation: the higher the exposure, the higher the risk of death, and health care workers get very high exposure."

Loftus said he started organizing volunteers to make protective equipment this past February, making 3D visors and other items, and teamed up with MasksForDocs to distribute more. He said Loder "is an example of the kind of citizen-activists who are making a difference for front-line health care workers across the country."

Doctors are thanking "citizen activists" for their help. (Masks For Docs Foundation)

Loftus was grateful that citizen volunteers have stepped up to help the medical community, but he also clearly has been riled. He said many officials should have seen the threat from the virus much earlier and been in a better position to protect Americans. He also directed blame at the White House.

President Trump continuously has defended his administration's response, from barring non-citizens arriving on flights from China in January to the numerous actions taken by the White House Coronavirus Task Force. However, initial test kits that were produced by the Centers for Disease Control and Prevention (CDC) in February to detect the virus turned out to be faulty, and memos showed that the administration, while internally warned of the possibility of a devastating pandemic in January, did not start large-scale orders of N95 masks and other medical equipment until mid-March.

Loftus also said Trump should have invoked the Defense Production Act to manufacture supplies much earlier.

The donations are going to doctors and other medical workers across the country. (Masks For Docs Foundation)

"Saying that a viral infection is not going to be a big deal, being in denial and ignoring the warnings of knowledgeable medical scientists who were raising the alarm, has made our shared catastrophe so much worse. More doctors like me are going to be dead of this virus because of decisions made by the Trump administration. That needs to be stated. Are we angry? Of course we are."

In the meantime, volunteers have jumped into the breach as the administration has ramped up its response.

"It's not just the hospitals that need this, but everybody," Loder said. The CDC's recommendation that Americans wear protective covering over their faces when going outside has created a need for homemade masks, which Loder's teams have picked up and dropped off at grocery stores and other places where workers could distribute them.

"We are planning for the long term,” Loder said. "If you deliver rivers of supplies three months from now, it will be too late. Doctors will be dead. If we keep everybody in a city in masks for 24 hours, that's a big deal. We have been helping [keep] people alive while the government and the big corporations figure their stuff out."

MaskForDocs.com has a page on its website for contributions, as well as a page for people who need supplies.