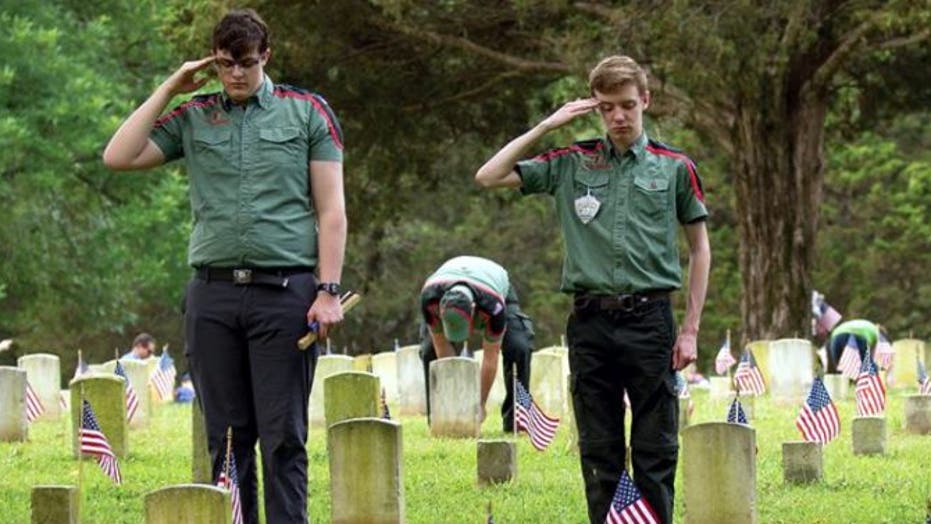 The Boy Scouts of America has filed for Chapter 11 bankruptcy protection after sexual abuse settlements have reportedly strained finances; Laura Ingle has the details.

The Boy Scouts of America (BSA), a staple for young men in America even as it confronted hundreds of sexual abuse settlements in recent years, filed on Tuesday for Chapter 11 bankruptcy, leaving parents and youth looking for alternatives.

The organization said Tuesday that scouting in the local councils is "continuing uninterrupted" for the more than 2 million members, though BSA may have to start selling off property or find other means to pay for the multimillion-dollar legion of lawsuits.

Though there are dozens of options, from 4-H to the Scout Association, one of them, Trail Life USA, launched in 2013 specifically as a faith-based alternative to the BSA.

A father and his son participate in Trail Life USA, a faith-based alternative to the Boy Scouts of America. (Trail Life USA)

With more than 30,000 members in all 50 states, Mark Hancock, CEO of Trail Life USA, told Fox News they are "saddened" by the news from BSA as they continue to build their organization, a "Christ-centered, boy-focused adventure, leadership, and character program."

"Boys are drawn to a program designed and implemented with them in mind, while parents appreciate the values that run throughout our program. Boys and girls are different," Hancock explained, referring to the BSA's decision to allow girls and children who identify as transgender to join last year.

FLORIDA PASTOR OFFERS 'CHALLENGE' TO PEOPLE WHO STOLE HIS CAR

"And Trail Life isn't afraid to say what every engaged parent or teacher knows," he said. "Boys and girls need programs designed for their unique strengths, and confusing cultural messages around their sexual identity only weakens our ability to protect them from those who would do harm."

Another alternative that actually predates the BSA is the Southern Baptist Convention's Royal Ambassadors (RA), which has around 30,000 youth enrolled. It is a mission-focused education organization for boys in first through sixth grade, that teaches "godly characteristics" and a "biblical worldview."

One of the major religious denominations that once sponsored large numbers of Boy Scout units, it has backed away after BSA's recent decisions.

"Tragically, the Boy Scouts seem to be continuing their trajectory toward embracing the moral priorities of the Sexual Revolution," Russell Moore, president of the Southern Baptist Ethics & Religious Liberty Commission (ERLC), told the Baptist Press in 2017. "The church must be absolutely clear about God's good and beautiful design for men and women, even when our most cherished public institutions fail to do so."

The Assemblies of God, one of the largest Pentecostal denominations, runs the Royal Rangers, which was founded in 1962 and has over 80,000 youth members.

"We provide Christ-like character formation and servant leadership development for boys and young men in a highly relational and fun environment," the mission statement reads.

Boys participate in seven experiences: "Connect with a community of Christlike men; do fun things together; grow in Christlike manhood; learn in interactive ways; belong to something big; lead yourself and others; and serve God, your family, church and community."

Some of the other faith-based alternatives include the Seventh-Day Adventist Church's Pathfinders, which is co-ed, for ages 10 to 15. Another is the Calvinist Cadet Corps, which is like BSA but with a Bible lesson at every meeting and overall more conservative.