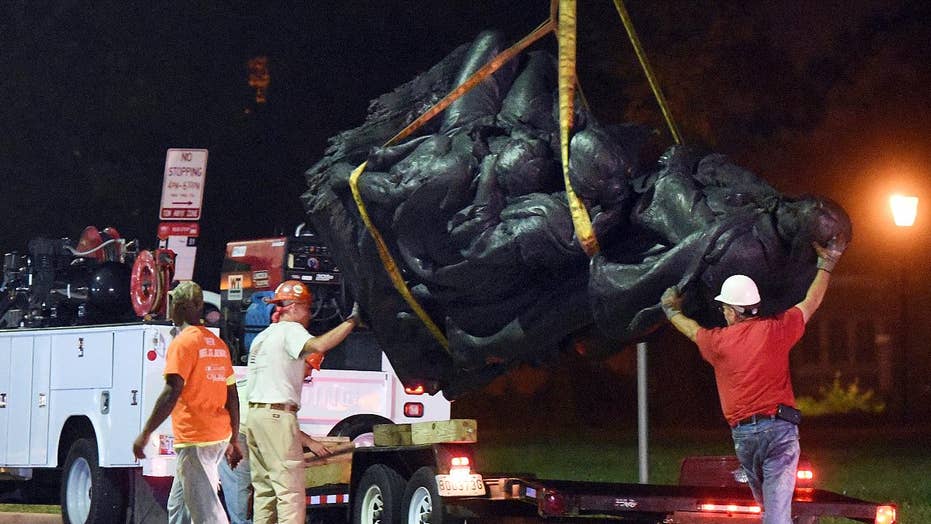 Baltimore's mayor said she wanted to move “quickly and quietly” after officials approved a plan to remove four Confederate statues Monday night, a decision that came amid a national furor over a violent white nationalist gathering in Virginia organized to protest the removal of a Confederate statue there.

Mayor Catherine Pugh told reporters Wednesday morning she felt the best way to remove the monuments, in an effort to keep the community safe, was to do the work overnight.

“I though there’s enough grandstanding, enough speeches being made [on the top], let’s get it done,” she said. “I spoke with the city council on Monday and said, 'With the climate in this nation, I think it’s very important that we move quickly and quietly'...and that’s what I did.”

Pugh, who is African-American, added: “I wanted them out of this city.”

Pugh reiterated several times that the city’s plan had been in the works since June, and earlier said the quick overnight action was designed to avoid violent conflicts like what Charlottesville experienced.

“I think any city that has confederate statue has concerns about violence happening in the city,” she said, adding it was long overdue.

Pugh dismissed concerns that the city could face potential lawsuits over the removal of the statues, saying: “What I know is that I did what was right for my city. That was my intent and it is done.”

Resident Derek Bowden told the Baltimore Sun that while he agreed with the city’s decision to remove the statues, racism and white privilege run deeper than just the statues.

“It’s major in its own right, but it’s small when it comes to the bigger battle,” the 59-year-old photographer told the newspaper. “It’s a bigger battle. This is a small victory. There’s a larger issue we have to look at, with being Americans and upholding the Constitution … to protect all people.”

Pugh said it’s unclear where the statues will end up, adding that there are confederate cemeteries across the country that have inquired about them in the past.

She said in their place, plaques should be erected explaining what was there and why they were removed.

“I don’t know why they were put there, but I do know they were offensive to many people in this nation,” Pugh added.

The actions taken by Baltimore officials are not unique to the Maryland city. Across the country, the events in Charlottesville over the moved leaders across the country to plan to wipe away much of the remaining Old South imagery.

Two statues were taken down immediately, in Gainesville, Florida, where the Daughters of the Confederacy removed a statue of a Confederate soldier known as "Ole Joe," and in Durham, North Carolina, where protesters used a rope to pull down a Confederate monument dedicated in 1924.

Three people have been arrested in connection to the statue in North Carolina.

"This week it's Robert E. Lee. I notice that Stonewall Jackson's coming down," Trump said during a visit to Trump Tower in New York. "I wonder, is it George Washington next week, and is it Thomas Jefferson the week after? You know you really do have to ask yourself, where does it stop?"