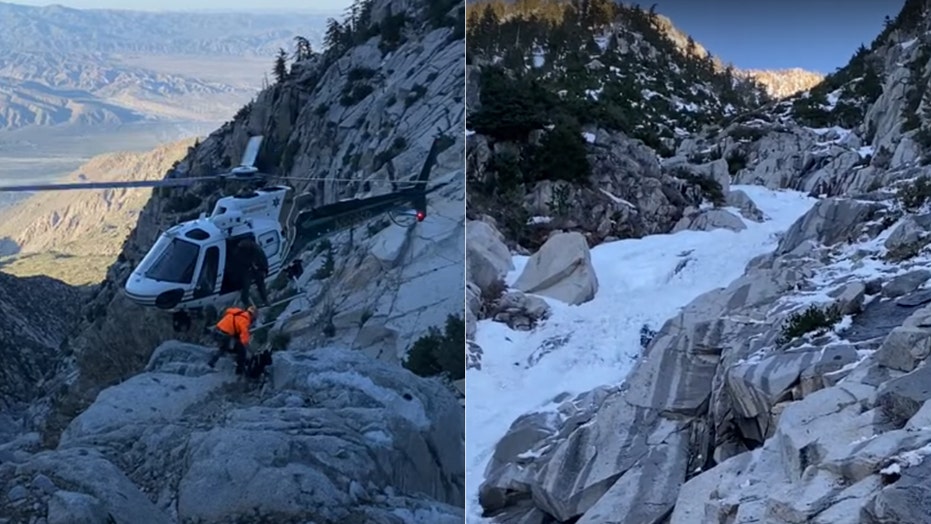 Avalanche safety: What are the warning signs

As fresh snowfall beckons those looking to enjoy the great outdoors in winter, it also brings the risk that comes along with avalanches. Feel safer while hitting the slopes while keeping an eye out for these signs that an avalanche could occur.

Two climbers were rescued by helicopter from San Jacinto Mountain in California on Friday after a spike in temperatures from "extreme heat" in the Southwest triggered an avalanche, according to officials.

The Riverside Mountain Rescue Unit said it conducted a rescue with the Riverside County Sheriff’s Aviation Unit after two people on the north face of the mountain were caught in an avalanche around 3:30 p.m. on Friday.

"The extreme heat has been setting off avalanches from the large storm last week," the RMRU said. "The subjects got caught in one and called for a rescue."

According to rescue officials, temperatures reached over 100 degrees on the desert floor on Friday as hot weather set in across the Southwest.

Video released by the RMRU shows a helicopter hovering off the mountainside as the rescue was underway.

A helicopter rescues two climbers off San Jacinto Mountain in California after an avalanche was reported due to "extreme heat" in the area. (Riverside Mountain Rescue via Storyful)

In an account of the rescue, Tyler Shumway writes the two climbers were "a bit shaken up but otherwise uninjured."

The two climbers were at 7,000 feet, which allowed them to have a cell signal in order to call rescues.

A second video shows a small avalanche of snow that fell down the mountain.

"It was utterly amazing to witness the raw power of the mountain," Shumway wrote.

AVALANCHE SAFETY: WHAT ARE THE WARNING SIGNS

In their account of the rescue on their website, the RMRU thanked pilot Manny Romero and technical flight officer Michael Chevalier for "performing flawlessly."

“Without them, this mission would not have been possible as getting to the subjects by foot would have been out of the question given the objective hazards,” the group said.

Sizzling temperatures are forecast this week across the Southwest. (Fox News)

According to the National Weather Service's (NWS) Weather Prediction Center (WPC), "sizzling temperatures" will persist as a high-pressure system lingers over the region.

Phoenix reached 100 degrees on Sunday, the first of 2020, where excessive heat warnings remain in effect for the metro area.

Heat warnings and heat advisories are in effect in the desert Southwest. (Fox News)

Above-average temperatures are forecast for the Phoenix area all week. (Fox News)

Temperatures are forecast to be 10 to 15 degrees above average through Thursday, with a few daily record highs possible across the region.